Archive » Zumra Nuru and Awra Amba: a story from 10.000 gardens in Africa

Awra Amba is an intentional community of around 500 people founded in northern Ethiopia to combat poverty, exploitation and gender inequality.

At the heart of this magnanimous project is a simple question: why should any one human being exploit another? This is the question that the founder of Awra Amba, Zumra Nuru, has been asking since he was four years old. 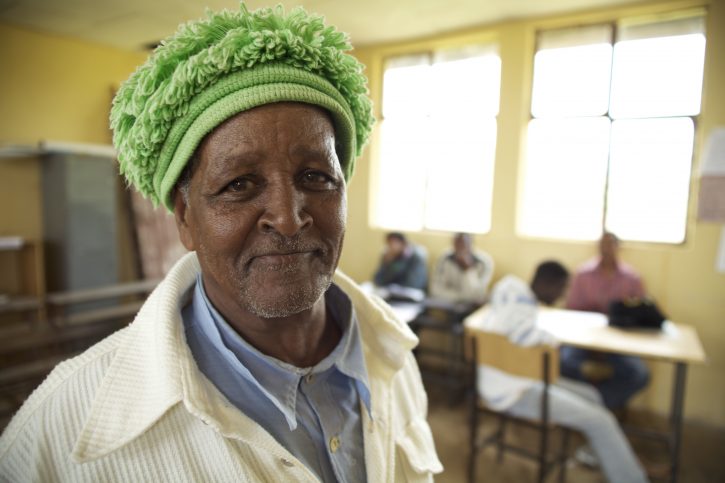 “I have no other ideas to discuss, this is the only one. My entire being has been possessed by these thoughts and my mind dwells in continuous contemplation. I never get tired of talking about it, though my body may be exhausted my mind is stimulated because I see it as planting seeds in people’s heads.”

Zumra and a small band of his followers first started to organize in the 1970s, and they remained thinly spread out across different areas until 1985, when came to live together in Awra Amba, finally able to produce enough food for everyone in the community. “The main difficulty was lack of money,” Zumra says.

“There were other difficulties too: we had to explain the values of the community. We talked about women’s rights, about who gives the orders and who takes them, the rights of children and of the elderly to be taken care of. When we said that lies and theft must be eradicated from our hearts and minds, outsiders told us it was impossible.”

Zumra was first painted as a kind of pifferaio magico who wanted to take people away from their families and children, and later as a guerilla fighter opposed to the Derg, the military government of Ethiopia between 1974 and 1987. Several attempts were made on his life and on other members of the Awra Amba community, and the entire community went into exile in southern Ethiopia, losing their farms, their livelihoods and many of their members to famine and malaria. “When we returned in 1992 we had no money, no land and no food. The surrounding communities were even more aggressively trying to destroy us.

“We had to rebuild our community from scratch. We had no food, so we collected seeds from the cotton plants we were weaving, crushed and boiled them to make a hot stew, feeding the children first and sharing the leftovers. We survived like this for five years.” Zumra taught the other members of the community some traditional weaving skills, which started to generate a little money. Without any farmland to tend, it soon became the community’s main source of income.

The hostility of surrounding communities cooled down over time as the people of Awra Amba never responded violently to any transgression, eventually pacifying their neighbors by listening to them and sharing their experiences. “Once they learned more about who we really were, they accepted us. Just like we raise our children with utmost patience, we have to approach these people in the same manner. If we cannot do this, then what makes us better than them?”

As well as its revolutionary egalitarianism among human beings, the Awra Amba community is attentive to the needs of our Mother Earth. “We have to replenish the nutrients of the soil and protect it from erosion. What will our children eat otherwise? By applying crop rotation we can preserve fertility and harvest two or three times a year. We used to harvest just once a year during the rainy season, but now we have access to underground aquifers, thanks to the help of Slow Food and other local donors. We share a lot in common with Slow Food, above all the need for constant discussion in order to find solutions. The invitation to discussion to the rest of the world is important, not just the politicians or journalists but all of humanity, regardless of age, gender or race.