Last weekend, Slow Food’s Istanbul branch Fikir Sahibi Damaklar (Thinking Palates) celebrated the third-annual Yedikule marul lettuce festival, a product which is also aboard the Ark of Taste. Yedikule lettuce is a variety of Romaine lettuce that is strongly linked to both the historic and contemporary daily diet of the area. Locals used to consume this lettuce not as a salad but by serving the leaves in a glass with fresh lemon juice and salt. It is an important food source for the urban area of Istanbul, and was the only variety of lettuce consumed here until imported varieties arrived in recent decades.

Cultivation of this lettuce is a tradition that has been handed down through countless generations, with an annual festival at the beginning of June (held this year on the 3rd and 4th) to celebrate the crop, that has been organized with the local Slow Food convivium since 2015. Yedikule lettuce, along with other crops grown in the unique area, is under threat from spreading urbanization.

The name, which means “seven tower lettuce”, recalls the seven towers that form part of the Byzantine wall surrounding the neighborhood, one of the most important historical sites that remains in the city. These walls were recognized as a UNESCO World Heritage Site in 1985, but now the convivium is also working to register the urban gardening traditions of the city as an intangible cultural heritage too.

Yedikule lettuce is also the flagship product of the 1500-year old Yedikule urban gardening site in Istanbul, which is also under threat due to urban regeneration activities being carried out by the Istanbul Municipality. In January 2016, the Municipality demolished nearly sixty sheds, where the gardeners kept their seeds, supplies and chickens. The Municipality claimed that the gardeners were occupying land that does not belong to them, indicating an area of cultivation that has existed since before the Republic of Turkey was established, and announced that production in all the gardens would have to end by March 2016. Despite the partial demolition work already carried out, the Yedikule gardens are still capable of providing a considerable amount of green produce to the citizens of Istanbul. 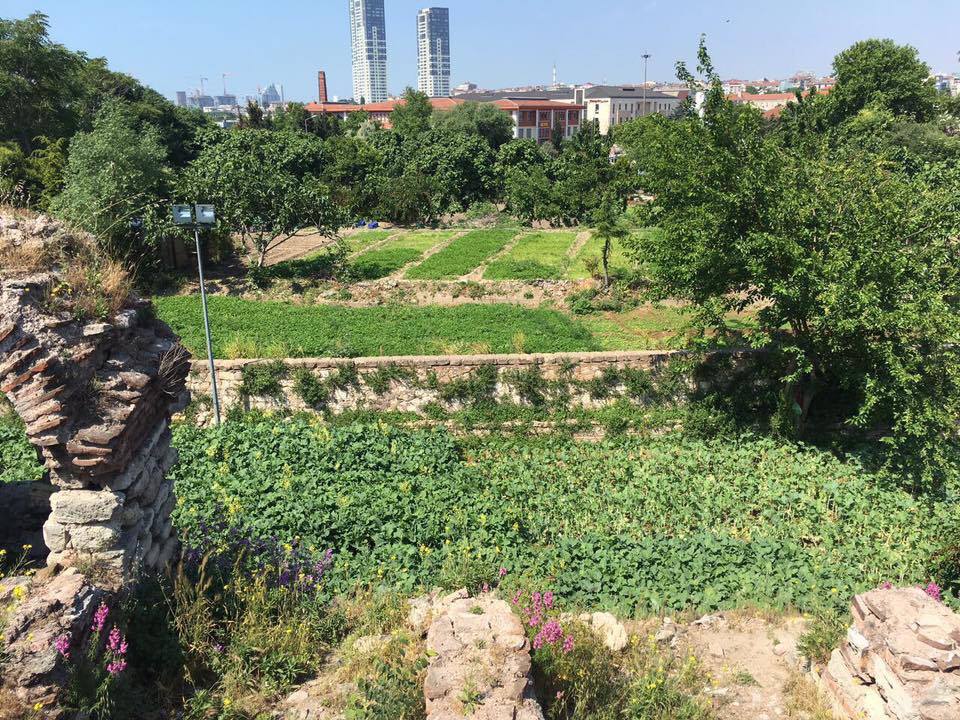 At the festival, other important news regarding the protection of biodiversity was also up for discussion. The Grand National Assembly of Turkey (TBMM) is now proposing a law in order to “improve industries and support productions”, that in practice opens the way for the destruction of ancient olive tree sites that currently enjoy legal protection1. The lettuce festival was an occasion to promote a petition against the government’s proposal2.

Note from the convivium:

“We send our gratitude to Aslihan Demirtas, Yedikule Gardens Protection Initiative, Kadir Has University Art and Design Faculty, to Dr. Mustafa Sari who started our celebration with the discussion on ‘Holy Ecology’, emerging traditional and scientific aspects of ecological protection, to the Permakamp team, to Basak Durgun from Dürtük collective for consumer resistance, to Ozbil Tuncelli from Fikir Sahibi Damaklar and Istanbul Culinary Academy students who, as the future chefs of this country, involved the Yedikule gardens in their preparations, to the Gümüşdere gardeners and Beyhan Uzuncarsili, to the Roma gardens and Sevil Baştürk, to the Kuzguncuk gardens and the Garden Stories team, and to Özkan Ökten, president of Yedikule Gardeners Association.”