Archive » “Whoever has the seeds has the power”

“Farm closings, concentration of lands, patents and monocultures: These are the effects of the power of multinationals in the food sector.” That’s the picture painted by Barbara Unmüßig, president of the Heinrich-Böll-Stiftung, the foundation that publishes a report on the environmental impact of industrial animal farming, Meat Atlas, with Friends of the Earth. Along with five other organizations— Rosa-Luxemburg-Stiftung, Bund für Umwelt und Naturschutz Deutschland, Oxfam Deutschland, Germanwatch and Le Monde Diplomatique—it has now put together Konzernatlas, an atlas of multinationals with data and facts regarding the food and agriculture sector. It makes for disconcerting reading. For now, it can be found in German here. 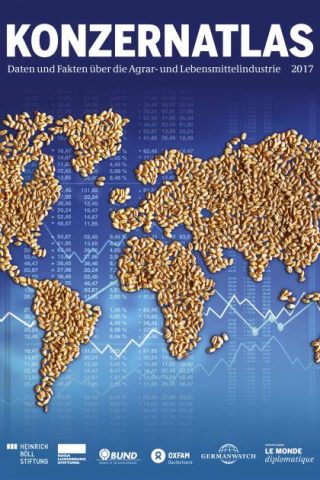 A report in the Bauern Zeitung, picked up by Agrapress, writes: “A growing share of food production is in the hands of an increasingly small number of multinationals, to the detriment of small farms, workers and the food sovereignty of every country.”

For example, between 2015 and 2016, five of the 12 most capital-intensive acquisitions carried out by listed companies concerned the food and agriculture sector, to the extent that the value of mergers between businesses in the sector was five times higher than that recorded in the pharmaceutical and oil industries. That’s right: Food and agriculture surpassed the two sectors that more than any other keep the world economy spinning.

At the moment, we read in the report, four multinationals, Archer Daniels Midland, Bunge, Cargill and Louis Dreyfus Company, control around 70% of the world trade in agricultural raw materials (wheat, corn and soy, followed by sugar, palm oil and rice), while 50% of the global market for agricultural technology is dominated by three big groups: the Netherlands-based CNH Industrial, Fiat (which covers 12 brands, including Case, New Holland, Steyr, Magirus and Iveco) and the American group AGCO, which has Gleaner, Deutz-Fahr, Fendt and Massey Ferguson.

But that’s nothing compared to the power held by the giant seed companies.

The market for seeds and pesticides is in the hands of seven companies, and could soon become even more consolidated. The two American companies DuPont and Dow Chemical are planning to merge, while ChemChina wants to buy the Swiss group Syngenta, and the German company Bayer is working on the acquisition of Monsanto. We don’t know what intentions BASF has. For now.

This possible and highly probable scenario would mean that three multinationals would hold sway over 60% of the market for seeds and agrochemicals. This would give them unconditional control over the markets and a monstrous power to influence governments and parliaments.

Let’s take the example of GMOs and pesticides. Based on European Union legislation, pesticides cannot be authorized until their safety has been demonstrated, and the same goes for GMOs too. In Europe, as it should be, the precautionary principle applies. Additionally, for GMOs, each country is able to make up its own mind: When it comes to GMO cultivation, individual EU member states have the right of self-determination. Over a year ago now, Italy sent a request to the European Commission to exclude the cultivation of all the GMOs authorized at a European level from all Italian territory. France had already taken similar measures in 2015.

But what would the situation be if the transatlantic treaties are ratified? And if these giants acquire even more power? The authors of the report do not hide their concern that, despite European regulations regarding the authorization and labeling of GMOs, these global giants could dispute them, challenging them as obstacles to growth and trade. While union means strength, these business behemoths are certainly not lacking in power.

Another aspect that is a challenge for farmers—and which makes many of them everyday heroes—are the patents on plants that force farmers to pay a fee to be able to buy and reproduce seeds. Not all of them can afford it, and they are also irretrievably losing their sovereignty over seed choice and production.

Perhaps this report should be shared around the European Parliament’s benches. It would be no bad thing if our European representatives tried to put themselves in farmers’ shoes for once… Because, as the document’s authors write: “Whoever secures genetic material through patents will have control over seeds and over agriculture, food production and, as a result, world food security.”

A word to the wise…