The news coming to us these days from the Slow Food network in South Africa is very worrying.

Violent marauding riots in Durban, Johannesburg and sections of the main highway between Johannesburg and Durban has left damage worth billions and over 200 people dead. Since the riots began last week, following former president Jacob Zuma’s imprisonment for contempt of court, dozens of goods trucks have been targeted by roving crowds, stripped of their cargo, and more often than not torched or dismantled for parts. The former president Jacob Zuma, implicated in a sprawling inquiry into allegations of bribery and corruption under his tenure was held in contempt of court and sentenced to 15 months in prison for his repeated refusal to participate in the trial’s proceedings.

More than 200 shopping malls had been looted by last week Monday afternoon and retailers had lost an estimated R2 billion, but the looting has not only occurred in the larger cities but crucially along the arterial trucking  route between the coast and Johannesburg. In some smaller towns there is not one shop, fuel station or pharmacy that has not been pillage or burnt to the ground. In some towns, medical centres and schools have been ransacked in the free for all riot that spread from the major cities into smaller towns and villages.The army has been deployed with some 25 thousand individuals to help stop the reign of violence and looting and to patrol the streets of the worst effected areas.

“As the dust settles, there is the prospect of further long-lasting suffering”, explains Arnold Tanzer, Slow Food Alliance chefs. “Hunger and food shortages in some areas were a problem before the riots, due in part, to coronavirus lockdowns as the pandemic surged through the country — but now risk being exacerbated by the havoc. South Africa has one of the worlds highest unemployment rate – and by some estimates around 74% of the youth are unemployed and have no glimmer of hope for the future- years of corruption has given rise to a nation with the greatest divide of have and have nots”.

Arguably the harshest pandemic lockdown in the world – had resulted in many people losing their jobs and businesses shutting for good over the last year – and there is little or no social grants or assistance from a government who is building up after 8 years of corruption.

Whilst large corporates are stocking up in the larger centres in Durban and Johannesburg – the trucks with essentials and fuel roll past smaller towns.

Local farmers and community organisations on the ground in the smaller towns begin to clean up and look towards the insurance companies for money to rebuild- it will take a long time, if at all. Many small businesses have no insurance and have opted not to rebuild.

There is an urgent need in smaller towns for the most basic essentials, flour, yeast, coffee, tea, dry goods such as tinned vegetables and porridge, basic medication from sanitary pads to headache tablets. 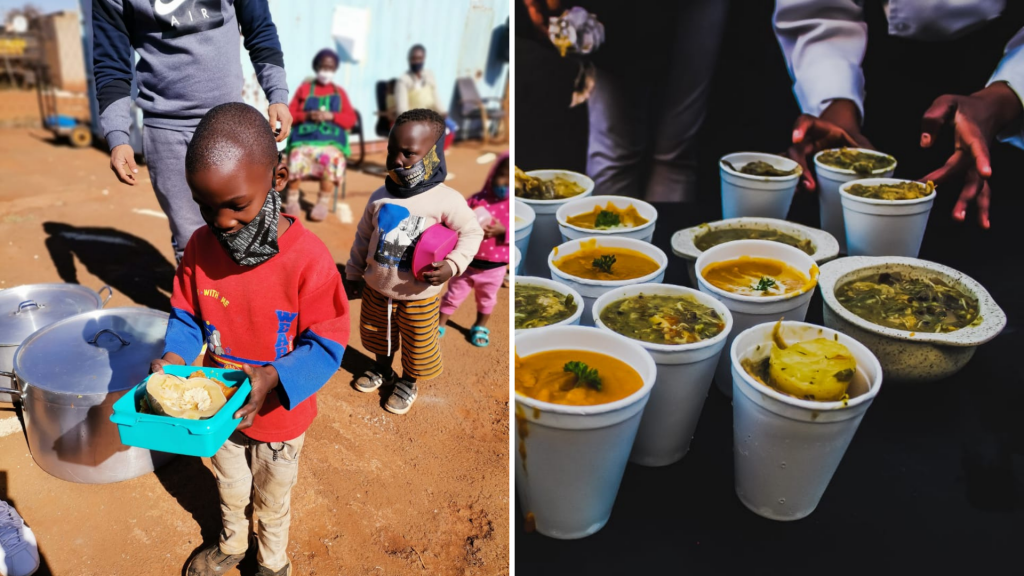 Another time after lockdown Chef with Compassion [ https://cwc.org.za/ ], a volunteer-based food rescue organisation, and Slow Food Chef’s Alliance in South Africa immediately reacted. Together sent some 6 tons to local communities – which included baby formula, porridge and pet food and 500 liters of nutritious soup.

“We are hoping to raise more funds and take more products to the communities affected in the next weeks”, says Steven Maresch, one of the Slow Food Chefs involved in the project. “Here communities have to deal with Covid and more recently with the riots. One of the most urgent issue is food shortage and lots of families are starting to not know where the next meal is coming from. We need to raise funds to engage communities to have gardens so that we can look for supplements solutions”, ends Ntuthuko Tshabalala, chef based in Soweto.And following this appeal Slow Food, through its Foundation, decided to give a donation supporting the network of gardens in that area.

If you want to support too, click here >> https://cwc.org.za/donate