Like the atmosphere, the sea is an open space that, beyond coastal waters, does not belong to any particular political or corporate entity. People have been taking food directly from the sea since the dawn of humanity. The oceans are a common good that belongs to the whole planet, a shared asset that is of vital importance to the whole world.

Despite all this, entire populations of marine wildlife are viewed as commodities rather than a shared heritage of natural resources with an intrinsic value. In our globalized economy, fish is now one of the most commercialized products in the world.

We are witnessing a major process of enclosure of the world’s oceans and fishery resources, including marine, coastal, and inland fisheries. This phenomenon is called ocean grabbing and it adversely affects the people and communities whose way of life, cultural identity, and livelihoods depend on their involvement in small-scale fishing and related activities.

To learn more about the dynamics of ocean grabbing, you can visit the Transnational Institute website. They have published several key documents about the different ways ocean grabbing is taking place all over the world.

The development promoted by Slow Food is based on a model of governance of our common resources—in particular, the resources of our lakes, rivers and oceans—known as co-management. This model consists of managing common resources collectively, that is, involving the local community, the scientific community, civil society and the state in defining protocols, values and norms that allow for the sustainable use of available resources. In this spirit, we have created a document which explains this positive solution. 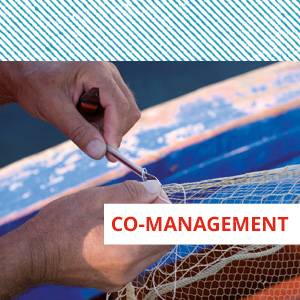 In this way, we have created a document that explains our solution: joint management