A legendary dairy farmer in the small region of Aubrac, André Valadier is responsible for the revival in the 1960s of the Tome de Laguiole, cornerstone of French cheese tradition, and the Aubrac cattle breed. The founder of the Jeune Montagne cooperative, for years the mayor of the town of Laguiole, a regional councilor for Midi-Pyrenées and the chair of INAO’s national committee for dairy products, Valadier remains a reference point for new generations of French cheesemakers. 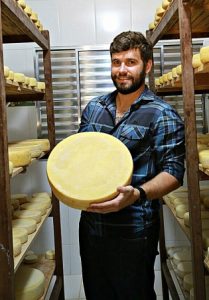 Born and raised in the city of São Paulo, Guilherme “Capim” Ferreira, 28, has taken his grandfather’s farm in São Roque de Minas as the starting point for constructing his future. In 2011, after studying veterinary medicine, Guilherme decided to take over the family farm and dedicate his life to raising livestock and producing cheeses like the traditional Serra da Canastra. He also chose to revive a local cattle breed, the Caracu. Now, though he continues to respect tradition, his farm is one of the most pioneering in the country; he has expanded into pig farming and will soon start running educational activities.

A cheesemaker from Jayena, near Granada, and chair of the Red Española de Queserías de Campo y Artesanas, an association of Spanish producers that defends and promotes the artisanal dairy sector, María Jesús Jiménez Horwitz is fighting to protect the extraordinary biodiversity of Spanish cheeses, currently under threat from standardization and food-safety regulations. She already has a degree in pharmacy, but also obtained a master in food safety in order to be able to dialog better with the administrations and authorities about the regulatory restrictions that endanger the survival of small artisanal dairies and their traditions. 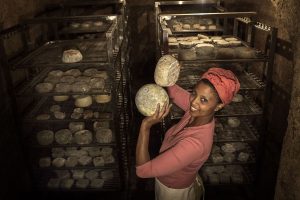 Agitu Ideo, 36, known to her Italian friends as Agi, is originally from Ethiopia. She discovered Trento as a student, fell in love with the area and decided to settle here. Having fled Addis Abeba with her family of nomadic herders, their way of life threatened by land grabbing, she decided to raise Pezzata Mòchena goats in Valle San Felice, in the Gresta Valley. The breed is typical of the area and at risk of extinction. On her farm, La Capra Felice (“the happy goat”), she raises 70 goats and 50 egg-laying hens on 11 hectares of formerly abandoned land, and cultivates 4,000 square meters of vegetables. La Capra Felice also has a small dairy and an agriturismo.

Farmer of Orobica goats, a Slow Food Presidium breed from Lombardy at risk of extinction

Formerly an electrician accustomed to city life, 20 years ago Ferdinando Quarteroni decided to change his life, and with his family he moved to the countryside to start a new adventure in livestock farming. In Lenna, in the Brembana Valley, Ferdy (his nickname and the name of his agriturismo) raises Bruna cattle, Avelignese horses and Orobica goats (a Slow Food Presidium), producing traditional goat’s milk cheeses like roviola, matuscin and formagin. School groups are welcomed at the farm, which also has a restaurant, rooms and a small spa. 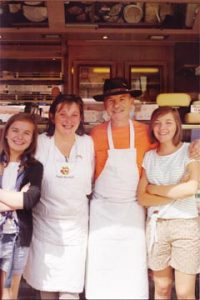 A strong character, eminently practical and hard working, Madeleine Hanssen is as at home in the role of producer as raw milk is in cheese. Having taken over her family’s hundred-year-old farm in the province of Liège, she began making traditional Herve, a Slow Food Presidium, along with her husband Philippe.
Madeleine’s Herve is the result of an age-old family passion, but is still at risk from the perils of hygiene-obsessed legislation. These regulations are what led to the closure of the family farm of José Munnix, the last producer of raw-milk Herve apart from Madeline. In response, artisanal producers from Wallonia, including Madeleine, have joined together to come up with shared strategies to protect small-scale raw-milk cheese production.