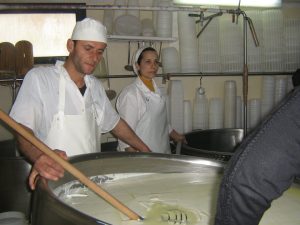 Born in 1973 in Shijak, in the prefecture of Durrës (Albania), Agron arrived in Italy in 1991 when he was just 17. These were the years of the Albanian economic crisis and communist dictatorship, which saw thousands of refugees fleeing their country and landing on Italian shores. He arrived in Brindisi, and after a few days was taken to Campofelice di Roccella in Sicily where he started picking licorice roots for an important and worked as a waiter in local restaurants.
But his life changed when he met Casimiro Invidiata, a small-scale cattle breeder who lived in Sicily’s Madonie Mountains and sold his milk to a dairy. This is how the story of Agron the shepherd began. In 1994 Sandra Invidiata, Casimiro’s daughter, joined the company and began cheesemaking activities. First a small dairy was built, followed by the first attempts to make stretched-curd cheese.
Agron spent several months in Abruzzo to learn the trade from some cheesemaker friends and in 2003 produced the first provola cheeses made according to the Madonie tradition. The company is now certified organic and part of the Slow Food Presidium. They only use milk from their own animals and produce various other top quality traditional Sicilian cheeses, all made by Agron. 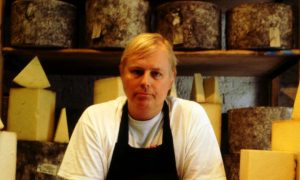 Randolph Hodgson is owner and president of Neal’s Yard Dairy, a company founded in 1979 in Covent Garden, London, to sell French and Greek cheese. In 1985, Randolph decided to start Neal’s Yard Dairy’s own production and so the dairy was launched. But the real turning point was in 1990 with the creation of the Specialist Cheesemakers’ Association, a group of 150 British companies that work in the field.
Randolph’s work, however, is not just limited to cheese and he is a renowned personality in Britain’s food scene. In 1990 he was one of the main supporters of the creation of Borough Market, a lively gastronomic hub of the city where quality products from all over the world are sold. Faced with the disappearance of traditional raw milk Stilton, Randolph couldn’t help but step in and, together with colleague Joe Schneider, began the production of Stichelton, Stilton according to its original recipe. In Welbeck farm in Nottinghamshire, traditional raw milk Stilton has been brought back to life. Randolph has been a influential figure in preserving and reviving the tastes of British tradition. 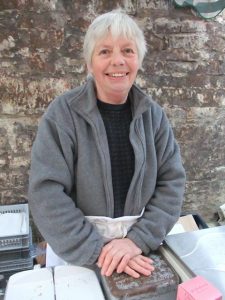 Mary Holbrook has been making cheese for about 30 years from when she started making a feta-type cheese from the milk of the two goats on the family farm. With time and hard work, she has now gathered a flock of 100 heads which include Saanen, Anglo-Nubian, Alpine and Boer goats.
But it has not been easy. In the United Kingdom, at the end of the 1970s and beginning of the 1980s, most goats were raised as domestic animals and were not sturdy enough to withstand the daily life of a herd at a dairy farm. Some goats fell ill after being in the open fields, others languished, unable to adapt to the social structure of the flock after years spent as domestic animals. However, Mary did not lose her spirits and decided to learn the art of cheesemaking. She attended training courses in France, in Coloummiers, bought many books on the topic, visited producers all over Europe and participated in conferences. Today, she produces various types of cheese. The most well known is Tymsborg, a truncated pyramid shaped cheese based on a recipe from Valencay which she discovered during a trip to Tours. Since the mid-1990s she has been experimenting with Portuguese recipes, such as Queijo da Serra, replacing rennet with thistle stamens. Mary makes incredibly aromatic cheeses, both fresh and aged, using methods that inspire her. Mary also hosts the many visitors who come to her farm and organizes workshops on cheesemaking.

Mosè Manni (born in 1933) is the icon of the historical Bitto cheese. For the past 79 years, every June 15 he has leaves Cosio Valtellino (So) and crosses the Gerola valley with his animals until they reach his alpine huts (called “malga”), 2100m above sea level. He lost his father as a child and began helping his family at a very young age. He began as a cascin (labourer), and then became a shepherd and finally a cheesemaker.
Over the years he has taught all the secrets of the trade to his younger daughter Antonella. Although he still helps with cheesemaking, Mosè now devotes his time to his greatest passion: goat breeding. He has been a goatherd for ten years and milks his Orobica breed goats, taking them grazing and bringing them back when they stray away from the hut or calécc (buildings made of three stone walls on which an awning rests). Together with the other 13 Presidium producers, he fights to promote the historical production of Bitto, which originated in the Gerola and Albaredo valleys. The Manni family’s cheeses are aged – like all cheeses in the Presidium – at the Presidium’s collective aging room in Gerola Alta. 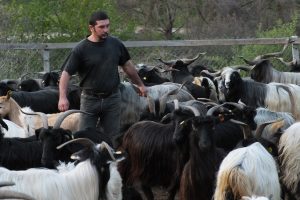 Sider Sedefchev was not born a shepherd but became one, followed his love for the mountains and his dedication to working with animals, especially endangered domesticated breeds. In his early twenties, together with brother Atila, Sider left the city and founded the Center for Rare Breeds and the Semperviva Association, both in Vlahi, a small, almost abandoned village at the foot of the Pirin Mountains, a UNESCO World Heritage site. Here, since 2000, he has raised the largest population of Karakachan sheep in the entire Balkan region, now a Slow Food Presidium. Sider also fights for the survival of Karakachan horses and dogs, and since 2005 he has conducted significant research to select and repopulate another local indigenous breed: the Kalofer goat, with long horns and even longer hair. His center is now known throughout the entire region as one of the symbols of the safeguard of indigenous breeds. Unfortunately, last June a fire destroyed the center and now the Presidium project is in great difficulty. 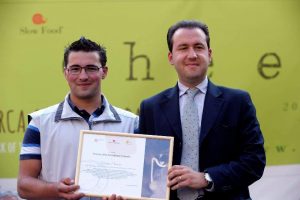 Twenty-two year old Matteo Pesenti decided five years ago to work with his father Gianfranco in the family business in Lombardy, Italy. Matteo is one of the most active producers of the Slow Food Presidium for the traditional stracchino from the Orobiche valleys, a soft cheese made from full-fat milk, once milked from “stracche” (tired) cows who had just come back from the mountain pastures. Matteo, who has a diploma from the Agricultural School in Bergamo, looks after about a dozen Alpine Brown cows who, in summer, he takes to the mountains, to the hamlets at the foot of mount Venturosa. Here he spends 100 days of mountain grazing and has now become a skilled cheesemaker. He currently processeshis milk independently and makes about 50 stracchinos a week, plus a few other small cheeses.