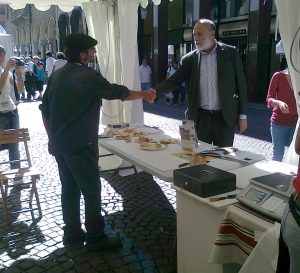 Denis has chosen to be a herder in Béarn, on the French side of the western Pyrenees, where flocks of Basque-Béarne sheep graze at altitudes as high as 2,000 meters above sea level. A strong tradition of bringing livestock up into the mountains for summer grazing has been maintained here. Denis decided to become a herder at the age of 14, despite not being from the area and having no financial resources. He began as an apprentice and with great tenacity gradually put together his own flock, renting pastures up in the Val d’Aspe. Denis is a poster boy for the many young people, particularly in this part of France, who are bucking trends and choosing to make a living making cheese. He has already received many awards for his excellent cheeses and has integrated perfectly into this land, known for its ancient herding traditions. 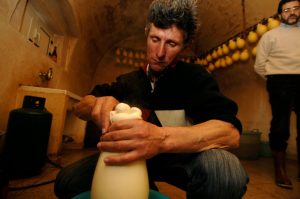 Vullnet came to Puglia from Skrapar in Albania a decade ago, and began working for Giuseppe Bramante, a historic Gargano Podolico Caciocavallo producer, at Masseria Paglicci in San Giovanni Rotondo, on the Gargano promontory. Here he learned the technique for producing Podolico Caciocavallo and became an expert. His cheeses are extraordinary and, with his passion and skill, he has contributed to carrying on the tradition of the Bramante family and the great Francesco De Maio. 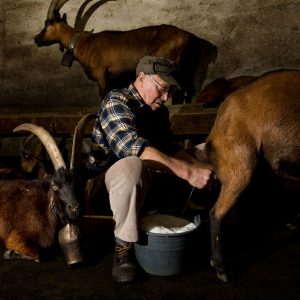 Celestino has dedicated his life to herding and raising livestock in Coazze, in the Sangone Valley in the province of Turin, taking his animals up to mountain pastures in the Susa and Chisone valleys. He maintains the tradition of making Cevrin, a mixed cow’s and goat’s milk cheese, which in 2000 became one of Italy’s first Slow Food Presidia. What’s more, along with other local farmers he has been active in saving a historic cattle breed, the barà. The fact that white cows with the typical black stripe along their sides can still be seen in the pastures of the Sangone Valley is thanks in part to Celestino and his family. He has passed his craft and his passion on to his four children, Maria, Elda, Aldo and Luigi, and they are now continuing the family tradition, with excellent results.

Maddalena is a descendent of one of the most important shepherding families in L’Aquila. For generations her ancestors have been taking their thousands of sheep from the slopes of the Gran Sasso down to Puglia every autumn, then returning to the mountains in the spring. She experienced the seasonal livestock migration directly from a young age. After spending a period as a teacher, she returned to Castel del Monte to make cheese with her brother Mariano, and now produces traditional Canestrato (a Slow Food Presidium). They also make goat’s milk cheese and other sheep’s milk cheeses using vegetable rennet, having revived an ancient tradition. Recognizing Maddalena with an award means paying tribute to a shepherding model that is changing radically but which has been integral to life in the Abruzzian mountains for centuries.