What we do » Themes » Food and Health

Diet, food quality, and lifestyle are all key factors in our health.

The global food production system is based on intensive agriculture, which relies on synthetic pesticides and fertilizers to produce highly processed, calorie-dense foods packed with additives, preservatives, sugars, and saturated fats. This is creating imbalances in environmental, economic, and social dynamics, particularly in more vulnerable countries, generating many public health problems like obesity and malnutrition.

Slow Food is working to promote production, processing, and consumption models that are as sustainable and healthy as possible for both individuals and the planet.

In the collective imagination, a healthy diet is often associated with privation, calorie restriction, and monotony. In reality, eating can easily be healthy and enjoyable at the same time.

The food that’s good for us is also good for the environment and the community.

But how can we eat well every day? We don’t have to invent anything new; all we have to do is look to our rich gastronomic traditions. Eating is not just a necessity, but a source of pleasure!

The triple burden of malnutrition

Malnutrition can be divided into three main categories depending on its primary cause: deficiency (undernutrition), excess (overweight), or an inadequate diet (lack of micronutrients).

Obese and overweight people have at least double the risk of developing heart disease, cancer, and diabetes, so-called non-communicable diseases (NCDs).
According to the World Health Organization (WHO), around the world, overweight and obesity cause more diseases than underweight, and in all countries this affects primarily the poorest members of society.

Heart disease, cancer, and diabetes cause 41 million deaths every year, equal to 71% of all deaths in the world. 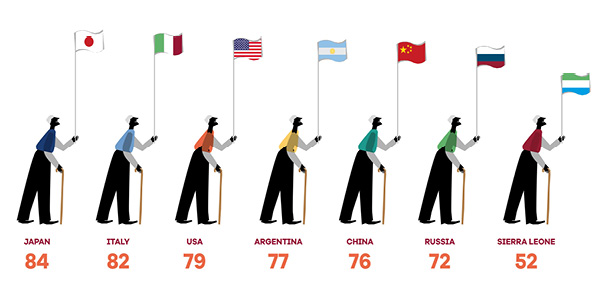 Globally the average life expectancy has increased from 52 years in 1960 to 72 years today, but there are sharp differences between countries.
Poverty is a determining factor. In general, if you’re rich, you’ll live on average to around 80 years, while if you’re poor you can expect just 63.

But while length of life is improving, health is worsening

In Europe, the last 10 years of life tend to be marked by illness or disability (Source: Eurostat). Industrial agrifood systems are making people sick in various ways, generating immense human and economic costs.

According to the World Health Organization (WHO), antimicrobial resistance (AMR) is the ability of a bacterium, a viruses or a parasite, to stop an antimicrobial drug (such as an antibiotic, an antiviral or some antimalarials) from working against it. As a result of this ability to neutralize drugs, standard treatments become ineffective and infections persist, and may spread.

Seven hundred thousand people die each year due to bacterial infections that antibiotics are unable to cure. In Europe the latest figure is 33,000 deaths a year, Italy being bottom of the league with 10,000 on its own (European Centre for Disease Prevention and Control – ECDC – data, published in Lancet Infectious Diseases).

Much of the blame for this world health emergency is attributable to the improper use and abuse of antibiotics – fundamental for their effectiveness in fighting infections – in human medicine and in livestock farming, where animals are often treated with them throughout their lives. If antimicrobial resistance hinders the effectiveness of treatments against some very dangerous bacteria, optimizing the use of antibiotics in both human medicine and animal husbandry helps check their onset and spread. Antibiotics do enter the food chain, after all.

Antimicrobial-resistant microbes are to be found in people, animals, food and the environment (in the water, in the soil and in the air). They may spread among people and animals, from foodstuffs of animal origin and from person to person, through direct contact between animals and people, or through the food chain and the environment.

In some countries, about 80% of total antibiotic consumption takes place in the livestock sector, up to four times the average amount used on humans. This diffusion may be explained by the fact that antibiotics are often used in livestock farms to promote growth and disease prevention, not to treat sick animals. This practice contributes to the development of resistant bacteria, especially in intensive animal farming.

The most effective way of stopping antimicrobial-resistant bacteria being transmitted from animals to humans is to prevent the appearance and spread of resistant bacteria in the animals we use for food. Antibiotics should not be used as a prevention tool in the absence of disease. In general, the practice of giving antibiotics to prevent the spread of harmful bacteria in livestock farms is common when animals are kept in crowded indoor spaces. The impossibility to behave naturally also causes stress to animals and, as a consequence, their immune systems are weaker. Here See the Slow Food Policy Paper on Animal Welfare.

On livestock farms, attention to animal welfare and respect for natural behavior play an important role in maintaining good health conditions and, consequently, avoiding giving antibiotics that enter the human food chain and contaminate soils and aquifers through effluents. Most of the antibiotics used on factory farms serve to check pathologies generated by intensive farming techniques, namely pathologies induced by excesses due to improper feed, ethologically insufficient spaces and genetic selection based on productive yield as opposed to resistance. The use of antibiotics on factory farms is proving extremely dangerous for global health, since environment, animals and people are inextricably intertwined.

For a healthy diet, Slow Food recommends everyone to eat less but better-quality meat. One of the fundamental aspects of quality undoubtedly involves the type of livestock farming in question. When buying meat from factory farms, for example, it is best to opt for “antibiotic-free” lines.

To find out more, visit the Slow Meat section.

The good news is that many of the diseases affecting the world’s population, including cancer, can often be avoided through diet and lifestyle.

Animal products, including fresh as well as processed meats, tend to be consumed in excess in many countries, and overall consumption has quintupled over the last 70 years. We need to reduce our consumption of animal-based foods and increase that of plant-based foods: fruits and vegetables, whole grains, legumes and oily seeds, plus healthy fats, which tend to come from plants.

How is the planet?

The planet’s health is severely compromised, with the most obvious symptoms being biodiversity loss and climate breakdown. The food production system is playing a crucial role.

Through its efforts to increase productivity, the industrial agrifood model established over the last 70 years has had devastating environmental and social impacts, polluting groundwater, soil, and air; reducing fertility and eroding soil; damaging the landscape; leading to the abandonment of marginal land; and causing an overall loss of diversity, both biological and cultural.

Over the last 70 years we have destroyed three quarters of the agrobiodiversity that farmers had selected over the previous 10,000 years. A handful of multinationals have seized control of our food, patenting hybrid seeds, fertilizers, pesticides, and weedkillers. 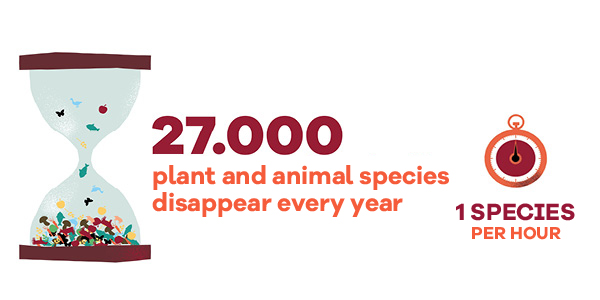 In 2019 the FAO published the first report on the state of global biodiversity in food and agriculture. According to this study, the collapse of the entire food production system is inevitable if we do not reverse current trends within 10 years (Sources: FAO, The State of the World’s Biodiversity for Food and Agriculture, 2019, and IPBES, Global Assessment Report on Biodiversity and Ecosystem Services, 2019).

Since the pre-industrial era, the average global surface temperature has risen by 1.5°C.
If things continue as they are, by the end of the century the average temperature could rise by 5°C—a very high fever for the planet. Beyond this, temperatures will not be compatible with life on Earth.

The overheating of the planet will cause:

A healthy diet is a climate-friendly diet

Our everyday food choices have an impact on our health, but also on the climate. Choosing more vegetables and legumes and reducing consumption of meat and industrial foods can lead to a considerable reduction of CO2 emissions.