What we do » Funded Projects » Cinema communities for Innovation, Networks and Environment – CINE » CINE Trainings » Trainings for young people 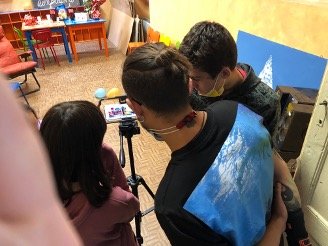 The first phase of the Cine nell’Hub project in Ivrea, at the Cinema Boaro, focused on identifying four trainers who were the backbone of the initiative in the territory of Ivrea. Participation in the training workshops, held in Bra, gave them the necessary tools to replicate the short film literacy courses with the use of smartphones also in Ivrea.

Then, in September 2021, the project of film promotion with an environmental theme called Gaia…il tempo stringe! was developed, in which the high schools of the territory of Ivrea were invited to participate in a film script contest, which led to the selection of four writing projects. Each of the four selected classes participated in 3 lessons of film literacy through the use of smartphones and the final realization, during extracurricular hours in the city, of 4 one-minute videos.

The 4 short films of the Hub of Ivrea, together with those of the Hubs of Bra and Cherasco were premiered at the Glocal Film Festival in Turin, during a masterclass with the director Daniele Vicari and the director of photography Gherardo Gossi.

In the month of December 2021, a group of students of the second and third classes of the Technical Course of Graphics and Communication of the Institute “Velso Mucci” of Bra participated and followed the lessons of the course “Filmmaking by phone”, organized by the Cinema Vittoria of Bra, within the project CINE.

The course was developed in two phases: an initial one dedicated to the history and methodologies of filmmaking, as well as to the division into groups, the definition of roles and the creation of themes, and a second phase dedicated to useful methods for the development of an effective text. All participants were accompanied in the process of creating and implementing a short film project with the smartphone, supported by technical equipment made available to them thanks to the project (smartphone, microphone, tripod, etc.).

The short films were screened at the Cinema Baretti in Turin on Saturday, March 12 during the 21st edition of the Glocal Film Festival. The projection was part of the masterclass “Shooting a film with a smartphone” led by Gherardo Gossi, director of photography in Turin.

The workshop of the CINE project took place on Saturdays 2, 9 and 16 October 2021, in collaboration with the Cinedehors Association: 18 boys of 14 years were involved in the activities.

During the first appointment, the trainers showed the boys how to make a small short film through the use of smartphones. Students, divided into four groups, decided to develop the theme of social discomfort generated by the pandemic among the younger generations.

After a first part of theoretical notions of filmmaking and directing and the choice of content to be developed, the groups proceeded to the drafting of the script and the design of the scenes. During the second day, they analyzed the material for filming (smartphones, tripods, supports, microphones) and illustrated its operation; then they shot the various scenes inside the buildings of Cherasco and in the green areas surrounding the workshop. During the last appointment the editing took place: the single videos of the shootings were viewed, analyzed and selected, and consequently edited. The short films were screened at the Cinema Galateri on December 12, during the last appointment of the project CINE.