Bernhard Wolf, a member of the Slow Food Chefs’ Alliance from Bavaria, Germany, has been working with food for 40 years. He runs a restaurant on the shores of Lake Tegernsee called “machtSINN” or “makes sense”, and will be coming to Slow Fish 2019 to teach us how to cook freshwater fish in a refined and creative fashion.

Just as important as what makes sense for Bernhard is what doesn’t make sense, as he explains to me: “In the long run we will not be able to avoid eating local, seasonal, organic food. Because the way we produce most of our food now will destroy our livelihoods later. The use of pesticides kills insects, nitrates are seeping into groundwater… these things don’t make any sense in the long run.”

What kind of cooking “makes sense”?

“What I find most important is that we absolutely must move away from the idea that everything is always available at all times. Throughout the winter we only cook what we’ve canned in summer or fresh produce from no more than 80 kilometers away. We have to get back there. We don’t need avocados! We have white cabbage and kale. Nature gives us a lot of good vegetables here that are full of the vitamins we need during the season. We really don’t need to ship fruit halfway across the globe.” 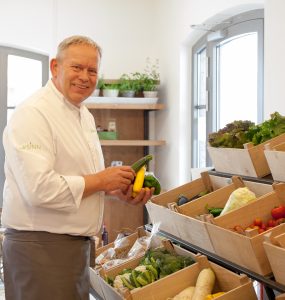 Let’s talk about the local fish in Lake Tegernsee: which species do you prefer to cook with and why?

I cook exclusively with freshwater fish from the lake or those that are bred nearby. The Renke (Coregonus renke) is the staple catch of the local fishers, but I love the pike, although this requires more work. Whether you cook it, fry it or make dumplings, you always get a wonderful taste experience. My favorite freshwater fish of all used to be the Huchen, a river fish. Unfortunately, it is very difficult to find nowadays, due to habitat loss and dams .

How do you work with local fishermen? Do they bring you the fresh catch right by?

Every day the fishers go around the lake to supply the restaurants directly. If I make a call in the morning, I get the fish at noon. I go by what the lake offers day by day and just take what was actually in the fishing nets.

How does seasonality affect your fish offering?

Some fish have a closed season when they can’t be caught. Then we switch to farmed fish. The fishers usually also have their own fish farm, where they raise char, trout and salmon trout. Of course, I make sure that my farmed fish come from a form of aquaculture that feeds the local and regional population instead of producing for export, and therefore produces smaller quantities. This respects animal welfare and is managed ecologically.

What can we expect from you at Slow Fish 2019 in Genoa? 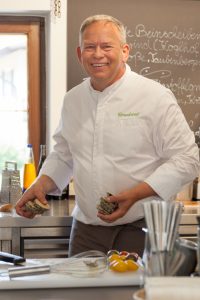 We are bringing freshwater fish with us, which we’ll prepare in the typical Bavarian style. There’ll be baked pike in beer dough, served with potato salad. I’m going to serve roasted renke, very similar to roasted herring. We serve it lukewarm with boiled potatoes. We’ll also prepare a Bavarian char fillet salad.

What does “Slow Food” mean to you?

For me, Slow Food is a network of like-minded people, whose structure as an association ensures that Slow Food is an independent organization and is not committed to supporting any political party or politician. I’m really excited about the “Ark of Taste” project in particular. We have a breeder of Alpine Rock Sheep in Hundham and an organic farmer in Fischbachau who, among other things, keeps Murnau Werdenfelser cattle.

You can come and learn more onhow to make the most of freshwater fish at the Cooking School session The Fish of Lake Tegernsee at 1.00 p.m. on Sunday May 12 in the Alliance Kitchen!