Archive » Ursula Hudson at the 9th Forum for the Future of Agriculture in Brussels: “We Need a Common EU Food Policy”

In her speech during the forum, Slow Food Germany’s Ursula Hudson called for an urgent evaluation of the current CAP. “Slow Food and many other organizations in the areas of farming, environment, development, climate, animal welfare and food systems believe that the efficiency and effectiveness of the CAP must be examined urgently. It does not seem to overcome the challenges that Europe faces in the areas of farming, economics and the environment, and does not seem to be able to solve systemic problems. The loss of livelihood of many European farmers along with instability and crisis in the European market are causing further decline in biodiversity and limited natural resources and are creating incentives for overproduction and food waste. These are just some examples of the negative consequences of the current food system, not to mention the impact on foreign markets.”

Slow Food has long believed that consumer awareness is fundamental to achieving a turnaround in agriculture and a sustainable food system. However, the political foundations must be present: “If we really want to work toward an ecologically sustainable food system in Europe, we must tackle the problem at the source and along the entire food chain. The fitness check of the CAP should get to the bottom of what kind of production is financially supported by the EU. One thing is certain: We need a food system that values the cultural, social and environmental aspects of food, as well as economic, and we need political will to support this. We need a common sustainable EU food policy, ” Hudson concluded. 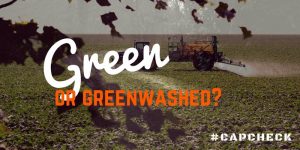