Archive » Understanding the Environmental Impact of Meat in 4 Minutes

Some time ago, during the “day without meat”, Le Monde published an interesting video entitled “4 min pour comprendre le vrai poids de la viande sur l’environnement” (Understanding the real impact of meat on the environment in 4 minutes). Through clear infographics, the documentary focuses on two specific points: the increase in meat consumption and the environmental impact of meat production. 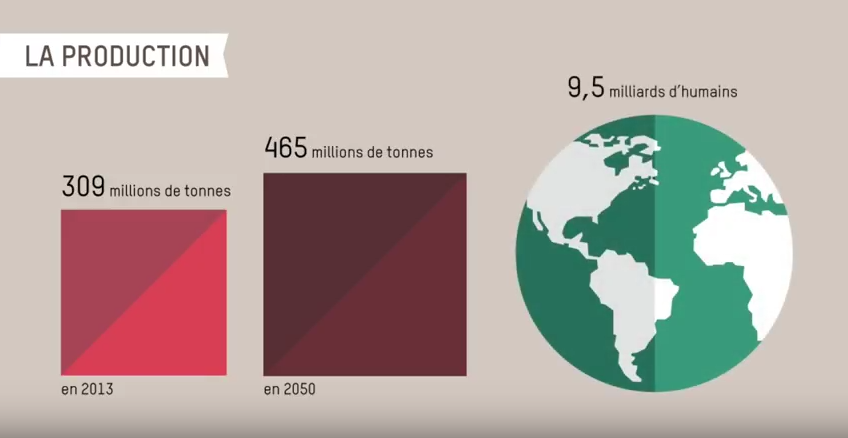 On average, a person in France today consumes 89 kilograms of meat per person per year, double what their grandparents consumed and three times as much as their great-grandparents. This increase in meat consumption has led to an increase in the number of animals slaughtered every year to satisfy the global appetite for meat which, according to estimates by Le Monde and the Meat Atlas, amounts to 65 billion animals a year (chickens are at the top of the list with 58 billion animals slaughtered annually). The world’s top consumers are in the Eastern Hemisphere, particularly China and India, which alone accounts for 46% of world consumption, followed by Europe with 20% and North America with 14%. In last place is Africa, with only 5% of total meat consumption. The worldwide figures are, however, certain to rise further. If our consumption continues to increase at the current rate, our meat production will have grown from 309 million tons in 2013 to 465 million tons by 2050, by which time the world’s population will exceed 9 billion inhabitants.

With rising consumption, at the global level we are witnessing an exacerbation of the industrialization of the livestock sector. For example, if in 1992 a pig farm in North America could accommodate approximately 945 animals, in 2012 the capacity was 8400. At the same time, on many farms the animals live in conditions that seemingly do not take their welfare into account. For example, in France about 83% of the 800 million chickens raised annually never see sunlight and 95% of the 25 million pigs raised each year live on slatted floors, without ever being able to root around on the ground. Animals are treated like machines, fed on corn mash and GMO soy instead of grass: a truth that Slow Food has highlighted many times when discussing factory farming. 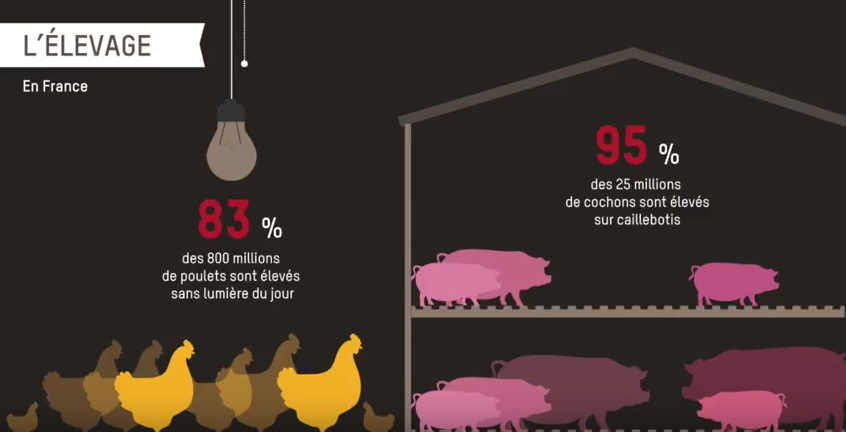 This constantly growing industry has a huge environmental impact, consuming water resources, agricultural land and huge swaths of forest – the livestock sector is responsible for the destruction of 70% of forests, particularly in the Amazon which is becoming one enormous pasture.

The compilation of this information alone highlights how citizens, NGOs and international organizations are becoming more and more aware of the impacts of meat consumption and are promoting a decrease in, if not complete cessation of, the consumption of meat. Of the two choices, Slow Food has always proposed the first, working alongside producers to promote high standards of animal welfare on farms and raising consumer awareness to enable more informed purchases. While appreciating Le Monde’s video that, in just four minutes, gives a clear idea of the current situation, we must, however, highlight an important omission: there is no mention, not a single word, that there are different types of meat production and that, by decreasing the amount of meat consumed and paying closer attention to quality, eating meat can be sustainable, in terms of animal welfare and environmental impact.