Archive » To Stay or Leave? In Ecuador, the Answer Comes from Food

More than ever before, migratory trends are seeing thousands of people leaving their homelands, all across the world. It’s happening in the region known as Austro, in the south of Ecuador.

When we talked to people living there, they told us bluntly that they are facing the greatest migratory crisis in history. Those who are leaving are farmers, the weakest and most marginalized in a system that places little value on the guardians of the land and their knowledge. The pandemic has accelerated the pace and it is estimated that in some employment sectors the numbers have doubled compared to the historic migration in the late 1990s following the feriado bancario, a serious financial crisis that led to Ecuador abandoning its currency, the sucre, and adopting the US dollar.

While in the past families would invest in one person, perhaps the “strongest,” so that they could emigrate to where the economy was better, now it is whole families who are abandoning the rural areas, women, men, children and the elderly. They leave their homes forever, gambling on a new life—and in many cases actually risking their lives to do so.

Some decide to leave, but some choose to stay, seeking to resist by following a different, community-based economic model. One example is the project Quinoa Saludable, conceived by a formidable indigenous woman, Achik, with the support of her two children, Zarasisa and Henry , and accompanied also by Chumbi, the Slow Food network of indigenous people in Ecuador. Their response to the rural exodus has been to bring together the women who have chosen an alternative path, staying on their land, and to give them visibility and value. 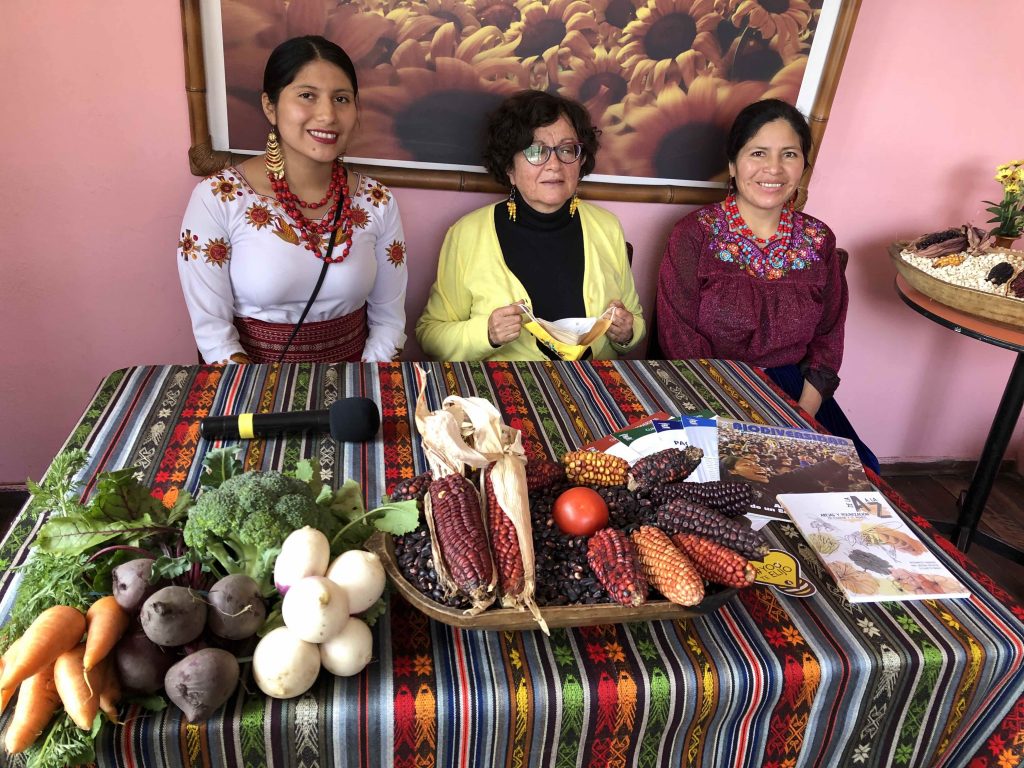 For World Food Day, they joined the “Alimentemos la Paz” campaign launched by Slow Food Latin America and The Caribbean networks, organizing an event in Quito named after their community’s intention, “El alimento nos une” (Food Unites Us) . This unique event is no typical agroecological fair, but rather a call for everyone to come together to tackle this serious problem, create opportunities and most of all feel part of a living, cohesive and strong community. The effects of emigration are dramatic and often those who remain are left with feelings of solitude and impotence, which can only be overcome through an awareness of being part of a community that is ready to reach out and extend a helping hand to its members.

Two decades ago, as many of her compatriots were emigrating to the United States, Achik changed destination to Quito to study and make a living by promoting the ancestral foods of her province, Cañar, making ancient grains and corn into chichas (fermented beverages), dishes and other products, following the traditional knowledge of the Kichwa people (few years later she would found her enterprise: Quinua Saludable). In this way she maintained a link with her land and helped to support the farmers still working there. Achik tells us that living in the city helped her value more her own culture that she still keeps alive. Ahich and her sons have been traveling back and forth between Quito and Cañar and they tell us how they have seen migratory trends intensify, and how now there is not one family without at least two or three members who have emigrated.

Those who leave this land forever leave a void in their families. Their physical presence is replaced by remittances, economic support sent monthly to those who remain so that they can survive, and, paradoxically, so that they can continue to live on this land, contributing to reducing new emigration. In many countries in the world, the GDP is primarily supported by remittances.

According to the World Bank, in 2020 there was a steep fall in remittances at a global level, a drop of 8.7%, but surprisingly in this year  Ecuador’s figures did not change, ensuring the arrival into the country of around $3.4 billion. This shows the significant increase in migration from the country.

Financial resources and development possibilities are thin on the ground where Zarasisa, Henry  and Achik live, and they lack any point of reference. The young people are depressed and feel they have no prospects, leading to a very high rate of suicide in the province of Cañar.

The consequences of migration are everywhere. Cañar, known as the granary of the southern winds due to its agricultural activities, is now full of fields that have been abandoned or turned over to livestock whose hooves flatten and harden the soil, destroying its agricultural value. The scarcity of water aggravates the farmers’ problems. Water is controlled by big monopolies, and farmers must walk hours to get a few gallons to water their crops.  The cultural and social erosion is also striking: family bonds broken, health problems, the loss of traditional food practices due to a lack of food education, knowledge transfer and adoption of new foreign food cultures.

As we said, migration increased due to the pandemic and now it involves whole families, meaning that parents decide to leave with their children, legally or illegally. This has meant an abundance of heartbreaking stories of children lost in the desert, of girls and women raped or left to die, of suicides, of desperation. Disappearances cannot be reported to the police due to the illegality of the migrations. There are many hidden, silent stories, to which Zarasisa, Henry and Achik now want to give voice.

These stories of grief and pain, however, are matched by other stories, of hope and endeavor. There are those who choose to stay and find a way to make a living, taking on the role of the head of their family. Many are women, whose entrepreneurial spirit, strong will and love leads them to undertake all kinds of projects, making sacrifices and overcoming challenges in the process. 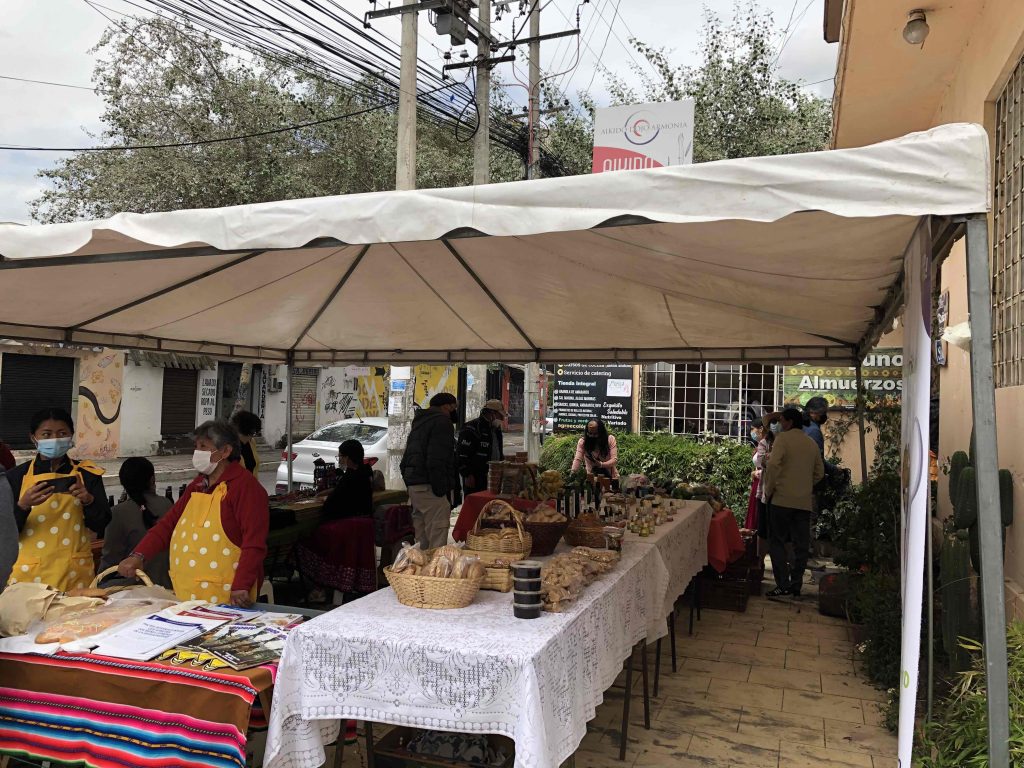 On Saturday Oct 16th, many of these guardians, entrepreneurs and fighters participated in this important Slow Food event. In Zarasisa’s words, the event is “a way for families to maintain what their grandparents taught them: leaving a seed, constructing a community, an ayllu [a family clan], and with this creating change. We fully believe that food unites and strengthens us.”

With thanks to Margarita Camacho of Slow Food Chumbi who interviewed Zarasisa Wakamaya Cazho Zaruma for this article. And to Zarasisa, Achik, Henrry and all the big family of Slow Food Chumbi and Quinua Saludable for not lowering their arms for a better, cleaner, and fairer future for each and everyone.