Archive » Women Who Feed the Planet

In every region of the world, women play a fundamental role in feeding families and communities, but often struggle to access the same resources and opportunities as men. Women in agriculture—challenges and opportunities for change—was a key topic during Terra Madre Giovani – We Feed the Planet, the Slow Food Youth Network’s four-day event held in Milan alongside Expo.

“The issue of women in agriculture is a complex one, as it has multiple dimensions,” said Dennis Aviles from Oxfam, co-organizer of the conference. “The world is changing and women face changing situations: migration, conflict, climate change, economic crises…”

“FAO says that women give an important contribution to agriculture, making up around 43% of the labor force, but this figure varies depending on geographical area, type of crop, even the women’s age,” said Aviles. “It’s often quoted that women produce 60-80% of food in developing worlds, though we don’t know this for sure as it’s difficult to measure their labor and separate it from all their other activities.“

Though women’s contribution varies across geographical regions, Aviles, who is Oxfam’s Sustainable Agriculture and Gender Advisor, maintained that there is one factor common to women on all continents: they consistently have less access to resources and opportunities than their male counterparts. She spoke about a gender gap in access to land, capital, technology, services, labor and education. In addition, they work longer hours and earn less than men.  “Even though we know that in an agricultural context, closing this gap would increase production by 20-30%, these inequalities persist.”

The debate also focused on the so-called ‘invisible’ issues affecting women in agriculture, such as violence and social norms. For example, in many areas it is normal for girls to drop out of school and marry early. “There is also issues of gender discrimination in feeding, where boys are given more food than girls.” 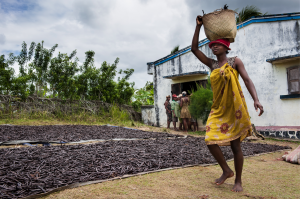 Aviles talked about “time poverty”, showing statistics—which repeated around the globe—of a stark difference in the time that women dedicate to unpaid care work compared to men. “This is a very serious issue because women don’t have the time to take up the messages and good advice we give them,” she said. “It’s therefore not surprising that they don’t benefit from all the initiatives aimed at improving their situation.”

The audience heard the inspirational stories of two female producers. The contagiously passionate Sri Lankan rice producer Dilani Renuka Chandrarathne talked about how she transformed a small piece of land into an organic rice paddy. “The villagers didn’t think I could do it, now they have all become organic farmers too!” She was followed by a producer of tomato puree from Burkina Faso who talked about how with a group of women, she formed a cooperative in the context of a patriarchal society.

The breakout sessions offered a chance for delegates to discuss their ideas of how we can trigger a shift in paradigm. Participants talked about the importance of an inclusive discussion that involves both men and women, as well as the need for a grassroots approach, rather that focusing on a policy-only level. The need to respect the different social roles of men and women was also reiterated by a number of delegates, i.e. women are not men and shouldn’t try to be; they need to be empowered in a different way.

“When women are powered, everyone is empowered,” said Zayaan Khan from Slow Food Youth Network South Africa, who chaired the conference. “Let’s show that power doesn’t have to be so concentrated.“

Moses Abukari from IFAD echoed this sentiment in the breakout group: “Once we invest in women, it will have a multiplying effect.”