Archive » The Sustainable Future of meat and the Curious

“The future belongs to the curious.”

In 1962 François Truffaut put this phrase into the mouth of one of the characters in Jules et Jim, the film adaptation of the book of the same name by Henri-Pierre Roché. These days we might struggle to see it as realistic, because wherever we look it seems as though the future belongs to the greedy and the arrogant, and that in general the curious seem to rank a bit lower.

But if we just change the phrase a little, we can make it become true again. How about: “The sustainable future of meat belongs to the curious”?

Let’s try a little role-playing game to see if we can find some practical applications of this maxim—and its opposite—to meat consumption.

Where else to start but by introducing the roles? Our first character is Mr Lazy. His actions are based on the logic of “that’s how I’ve always done it,” and he’s generally ill-disposed to change, for reasons of taste or ability. He’s the one who always gets the same flavor of ice cream and always orders the same pizza, and if by chance he deviates from his set-in-stone habits you’ve got to assume there’s some kind of problem.

The second is Ms Enterprising. Her actions and choices are based on a willingness to change, to experiment, not because she doesn’t have tastes or preferences, but because her primary instinct is a desire to try new things. If you see her in a shop, she might well be reading the food labels or looking up a recipe for an unusual vegetable or cut of meat on her phone.

At the butchers, Mr Lazy tends to always choose the same types of meat: pork, beef, chicken. That’s about it. For those who stop at the usual suspects, the idea of buying—and cooking—a rabbit, a horse steak or a mutton chop is almost unthinkable. What’s more, it’s likely he doesn’t pay any attention to the breed of the animal whose meat he’s buying. Doesn’t sound like you? It should reverberate with many though, given that within the European Union pork, beef and poultry are responsible for the vast majority of meat sales, and globally there are fewer and fewer different breeds reared for meat. The remaining breeds are becoming increasingly globalized. The Large White pig, Jersey and Simmental cows and Bantam chickens , for example, have replaced thousands of local breeds, with complete disregard for biodiversity. Mr Lazy doesn’t care. He’s happy to eat a few well-known species and a few globalized breeds, without ever taking even a tiny bit of initiative. 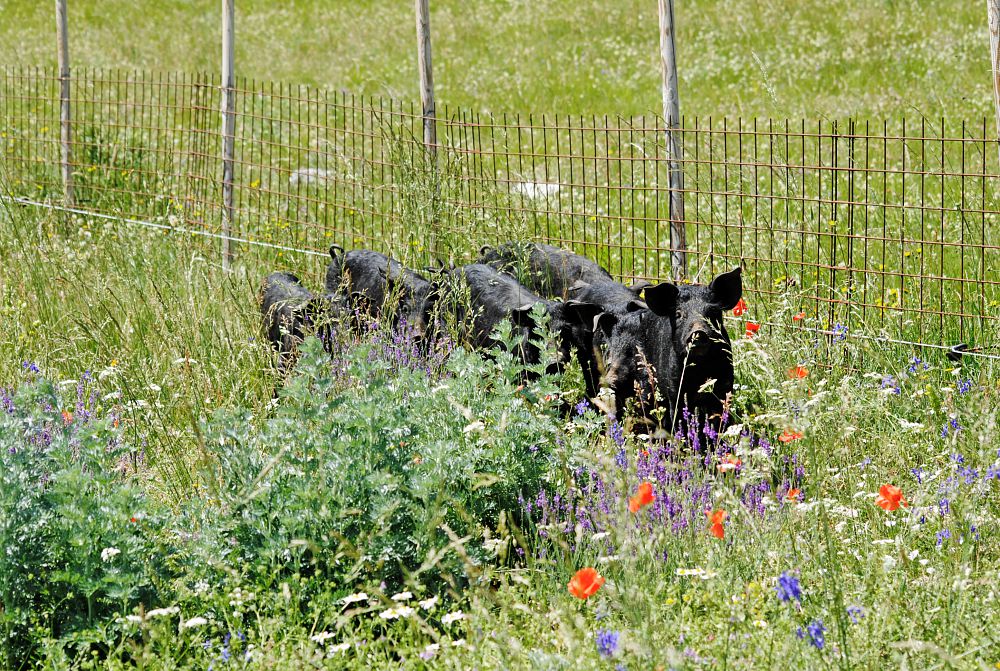 Ms Enterprising, however, is more interested being proactive, in testing out her abilities in the kitchen or making a less-obvious choice when reading a restaurant menu. But take note! It’s not a given that the first time she cooks a capon she’ll be happy with the result. Every time we try something new in the kitchen we might make small mistakes or end up with a big mess. Cooking something too long, at the wrong temperature or in the wrong way is always a possibility. And sometimes it’s frustrating have read and anticipated a recipe and then find yourself with something that bears little resemblance to your initial expectations. But proceeding by trial and error one acquires new skills and abilities, and what once seemed difficult or even impossible will gradually become feasible or even easy.

If we take them to the extreme, such different approaches can have opposing consequences on the market and on livestock farming rationale. If we were all like Mr Lazy—even more than we already are—we would find ourselves in a world of Large Whites, Jerseys and Bantams, with no room for other farmed species or breeds. What’s more, if we were all like Mr Lazy we’d be putting genetics—even more than we already are—into the hands of a few multinationals who are interested only in standardizing breeds. If we were all like Ms Enterprising, on the other hand, there would be more space for local breeds, and beyond chicken, pork and beef we’d find goat, turkey, buffalo, mutton and more on our plates.

When it comes to cuts of meat, Mr Lazy and Ms Enterprising are even more different.

The first will never think of straying from his usual habits: chicken breast, minute steaks to cook in the pan, pork chops. Forget change! Try and put something less familiar in front of him and he’d probably make a Confused Travolta gesture. He’d look at you with bewilderment, as though to ask “What am I supposed to do with this piece of meat?”

Ms Enterprising, meanwhile, takes a more exploratory approach, scanning the counter in search of something she’s never tried, maybe catching sight of the tray of chicken livers, asking the butcher for some tips on how to cook them… and going for it. From our perspective, her meals will undoubtedly be more satisfying—how boring to always eat the same two or three things!—her cooking will be more interesting and her wallet will also be fuller, because less-familiar cuts tend to cost less. In other words, Ms Enterprising might have to put in a bit more effort at the beginning, but she’ll get a lot more enjoyment later. And these benefits are applicable not just to meat consumption but all areas of life.

Continuing with another thought experiment, if all of a sudden we all started buying only chicken breasts and pork tenderloins, what would we do with the rest of the chicken or the pig? Throw it away is not an acceptable response!

There’s another aspect to these two opposing behaviors, relating to human relationships, and it’s a not insignificant one.

Mr Lazy probably isn’t very interested in the work that lies behind his steak. What matters is that he can cook it without too much effort. So it’s likely that he’s happy to buy meat from the supermarket, without launching into a rewarding dynamic of questions and answers, which tend to give more value to what we eat.

Ms Enterprising, on the other hand, is the one who goes to the butcher to ask for advice on cuts and types, and even takes the trouble to go straight to the source, getting to know virtuous farms and talking with the people who work there about how the animals are reared, how they are fed, where they live in the summer and winter, the challenges and rewards of this type of farming, and much more. Excellent! Because seeking out the roots of our food can be incredibly enriching, allowing us to get to know breeds, places and people and make fascinating discoveries often very close to our homes.

Have you guessed which profile we’re behind? It’s not hard to work out that we’re on the side of the curious Ms Enterprising. Which profile best fits you? Are you more for steaks or faggots? See what your starting point is with our simple quiz