Archive » The queens of the sea: the (in)visible role of women in fishing

The role of women in fisheries is often underestimated, as fishing is usually perceived as a male activity.

Women, though, play a crucial role in fishing in many communities in the world. They are often responsible for the preparation of fish before it goes to market, and even become fisherwomen, challenging traditional gender roles. On May 9, Slow Fish shared three stories of women in fishing at the Slow Fish Arena.

The Boat Captain of the Wadden Sea

Barbara Rostenburg-Geerstsena is an oyster gatherer of the Wadden Sea in the Netherlands. The sea, whose shores extend to Denmark and Germany, is often called a “sea of mud” or “inter-tidal plain” as part of the coast is periodically submerged by tides.

“The Wadden Sea is very shallow, so specific traditional fishing techniques have been developed. You need to know its waters and ecosystem well.”

Due to these unique conditions, the fishers of the Wadden Sea rarely fish in other seas, as this would typically require different fishing equipment, boats, and licenses.

“We are dependent on this little piece of water, and this gives you a special connection to your profession. In the last decades, the number of fish has decreased in the Wadden Sea, and so has the number of fishers. Changes in the ecosystem pose a threat to some species, and it also poses a threat to us and our fishing tradition.”

Rostenburg-Geerstsena says that contrary to the neighboring North Sea, it has been historically common for wife and husband to fish together in the Wadden Sea. However, this tendency is changing, and fewer women are directly involved in fishing now.

“Many women work in the promotion of their fishing companies, but they have never experienced what it means to go to sea. They tell stories to their customers of how the fish was caught, but they’ve never witnessed it themselves.”

Sally Barnes has been smoking fish “for longer than she can remember”, and is the only person in Ireland who still smokes wild salmon. Barnes uses the ancient method, which consists of putting the fish under salt and then drying it with smoke. It took her about three years to experiment with different smoking techniques until she found the best method: salt, beechwood, and no dyes.

“The dyes allow fish producers to create a product much more rapidly, so they sell you a lot of water in the fish. With the slow smoking technique, there’s only a 3%-5% reduction of the weight of the fish, so it retains much more of its natural flavor.”

Barnes also has to compete with the massive and intensive production of farmed salmon, which she calls “an initiative of the Irish government to make Ireland a salmon farm.” Another challenge for Barnes is getting fresh fish, as the boats usually go to the sea for six days and keep their catch on ice until they come back to shore.

Although Barnes agrees that it is tough to be a woman in the fishing world, since women are usually the ones who stay at home with children, the last wild salmon smoker says she wouldn’t want to do anything else. “It gives me a huge amount of joy, creating something that gives people a great taste experience.”

The Female Divers Of Jeju Island

Up to seven hours a day, 90 days a year, a community of women on Jeju Island in South Korea dive into the sea to harvest seafood. In their unique fishing method, Jeju haenyeo (female divers) do not use oxygen masks; instead, they hold their breath for one minute and dive ten meters underwater to harvest by hand. Divers are categorized into three groups according to their level of experience: the most experienced ones (sanggun) are in charge of the group’s security in the water. Interestingly, this job requiring strong physical endurance and specific breathing techniques is performed by women in their 50s and 60s, with some even in their 80s or 90s. 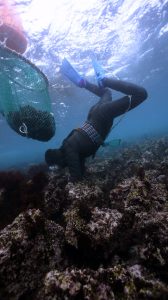 This unique knowledge is passed down through the generations; however, this purely-female fishing method risks becoming extinct as the number of haenyeo has decreased dramatically over the years, from 23,000 in 1965 to just 4000 diving fishers in 2015.

“Many people do not want their family members to become a haenyeo because today women have more opportunities to get a good education and a good job. We are concerned about declining numbers,” says Minsoo Kim, Slow Food International Councillor from South Korea, adding that it is vital to find ways to “continue the tradition of the Queens of the Sea”.

As Sally Barnes underlined in her speech, these moments of sharing are important for communities that spend a lot of time alone, encouraging them, reminding them they’re part of a wider community and thus strengthening their resolve. “I love Slow Fish because it gives me an association with people from all over this planet who know what I’m talking about.” 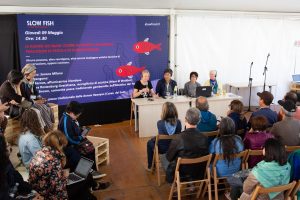