Archive » The Manioc of the Silent People

The Kiriri are one of the indigenous peoples living in the Sertão, the semi-arid region found in northeastern Brazil. Their name means Silent People, but this community has made itself heard and managed an important victory that has inspired many other indigenous groups fighting to regain access to their land.

After 15 years of campaigning, in 1990 the federal government recognized the right of the Kiriri to the land where they had always lived, in the municipality of Banzaê, or land of the courageous in the local language.

The relentless drought affecting the region, coupled with the increasing disappearance of the flour houses, amplify the growing crisis in traditional manioc processing. The Kiriri are working to revive the cultivation of manioc, an emblematic crop in their food tradition.

Slow Food established the Kiriri Manioc Flour Presidium in 2018 thanks to a collaboration with International Fund for Agricultural Development (IFAD) and Associação Comunitária Indígena Kiriri Santo André de Marcação (ACIKSAM), an association formed by around 20 young Kiriri who were interested in promoting manioc production and adding value to the traditional processing techniques to create a viable income from it. .

Slow Food talked to Reinaldo Mendes, president of ACIKSAM, who told us more about the importance of manioc to the community. 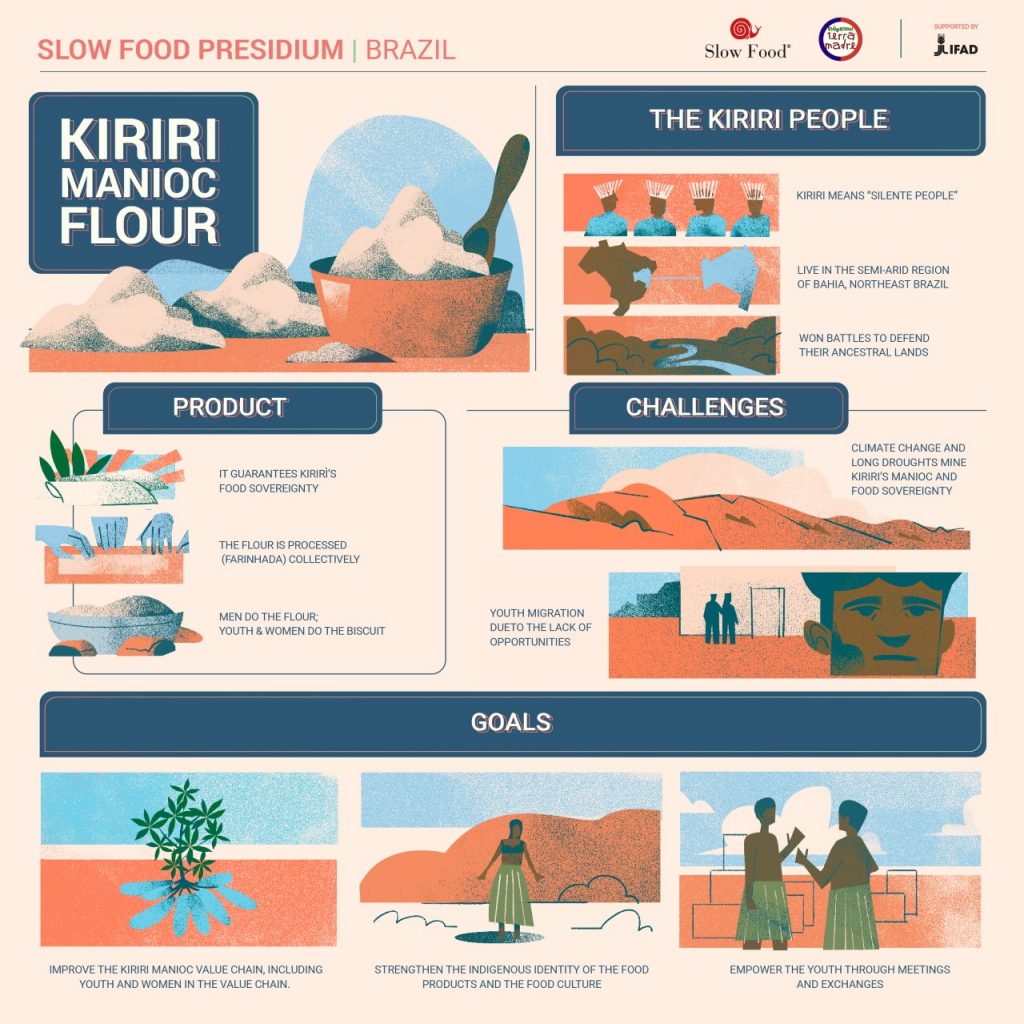 What objectives has the Slow Food Presidium manioc flour reached since it began?

Now the Kiriri producers see manioc not just as a root from which to make sussú or flour. They have realized how important it is to take care over and improve the entire production process. They are aware that manioc offers numerous possibilities thanks to the many products they can make from it, like polvilho doce and azedo, two different types of starch used to make biscuits, wafers, cakes and more. Also, they now know about manioc’s use as an animal feed. All of this makes it possible to recognize the story of our people’s fight and encourages them not to abandon traditional crops.

It’s important to remember that this community bases its economy on different types of subsistence agriculture, in which manioc cultivation has always played a primary role. Through the Presidium, Slow Food is seeking to give everyone support and motivation. The young indigenous people and the different partners are working together on other projects to promote human and social capital empowerment actions, while respecting the cultural activities of the indigenous people and the distinctive cultural, political, environmental and economic characteristics of Kiriri society.

What does this product represent for your indigenous community?

Manioc is one of the main crops cultivated by indigenous peoples in Brazil, and it is grown throughout the Kiriri area in the Banzaê municipality, in the state of Bahia. Over the past eight years, the semi-arid region of Bahia has suffered greatly due to a lack of rain, with long periods of drought affecting all agricultural and livestock production.

Because of this, manioc production has seen a serious drop. There are fewer seeds, and production, which takes place in plots in family gardens, has fallen dramatically. We’ve had to import manioc from other regions, but it doesn’t have the same characteristics as the locally grown roots.

To process the manioc, between September and November the families come together for what is known as the farinhada, manioc flour production, in the facility created by IFAD. But without the raw material, the factory is obviously suffering, with effects on the production of starch for biscuits, an important source of income for women and youth.

Our products symbolize our resistance and our fight to recover our native lands. We must not forget that until a few decades ago the community did not have enough land for subsistence and food production.

Can you tell us more about the project?

Between 2007 and 2015, thanks to IFAD’s support and as part of the Gente de Valor Project, actions were launched in the Banzaê municipality. The rural communities presented their requests, and one of the ones that was accepted was for the creation of the Unidade de Beneficiamento de Mandioca and the Fábrica de Biscoitos e Beijus in the indigenous community of Marcação, which gave a new boost to the local area.

Associação Comunitária Indígena Kiriri Santo André di Marcação signed different agreements with production and sociocultural entities relating to manioc cultivation and apiculture. In order to respond to the needs of the communities, the factory’s output is used to participate in family agriculture markets, events and forums at a regional, national and international level.

For example, in 2018, a young Kiriri woman travelled to Turin to represent her community at Terra Madre. It’s worth remembering that the “KIRIRI DA MARCAÇÃO” products have obtained the Selo Indígena do Brasil, the stamp for indigenous Brazilian products, and enjoy national and international recognition. Small-scale family producers and diverse groups have visited the factory. Kiriri producers were also present at the Olympics in 2018, held in Brazil, where they sold their products.

What does it feel like to be part of the Slow Food movement, and what does it mean for you to belong to a global network?

The project’s outcomes have been immediately positive: For the first time, young people have been involved in the organization of the Unidade de Beneficiamento. They participate in its financial and administrative management, in the production of labels and in a dialog with indigenous gastronomy, useful for encouraging the cultivation and protection of biodiversity in the local area. Thanks to the project, a producer participated in Terra Madre 2018, and we hope to be able to participate in Terra Madre Brazil in 2020 in order to promote our products further

Why is it important to maintain the healthy food habits of the Kiriri people? How can this help strengthen the local culture and the Banzaê area?

Keeping alive the local food habits is important for maintaining a correct, healthy diet, one that is wholesome for the body and the mind. In order to have a good diet, it’s essential to eat vegetables, legumes, fruit and low-calorie protein. And this is possible by rediscovering the importance of the local food culture.

The Slow Food Kiriri Manioc Flour Presidium is supported by IFAD as part of a project that aims to help indigenous communities and protect and promote their gastronomic heritage.