Archive » The Grain Renaissance in the United States: The Case of the Colorado Grain Chain

A food renaissance focused on grain is happening in the United States and many other countries. The people behind it are raising awareness about the humble grains that have been central to the daily diets of humans around the world for millennia: rice, wheat, oats, maize, barley, rye, buckwheat, amaranth, millet, sorghum, quinoa and more.

Not just farmers, but a growing number of links in the grain chain – farmers, millers, bakers, chefs, pasta-makers, maltsters, brewers, distillers, scientists, activists and educators – have come together to raise consciousness and appetites in our minds and on our palates. The key players in this renaissance make use of the latest knowledge and technology in regenerative agriculture, and they employ state-of-the-art food production methods, including a new generation of stone mills, to make lowly grains the flavorful and nutritious stars of our diets.

Why are we all just starting to care more about grains as a part of our local foodsheds? Nowadays, grain economies are mostly national and transnational in scale, due to commodification of industrial grain agriculture, processing, storage and distribution. Historically, economies of scale have ruled, but a small and steadily growing segment of farmers across the country are cultivating a whole range of grains that are best-suited to where they are grown, and they are not compromising nutrition and flavor for profit.

The Birth of the Colorado Grain Chain

In the US, the grain renaissance has led to the creation of the Colorado Grain Chain (CGC), which grew out of efforts by the Rocky Mountain Farmers Union (RMFU), in partnership with the University of Colorado in Colorado Springs (UCCS), through a grant from the US Department of Agriculture.

Formed to work with grain producers, educators and consumers to promote “grain literacy”, the CGC is working to raise awareness and a sense of urgency about the fact that biodiversity in grain agriculture not only contributes to healthy soil, but to a more diverse and nutritious human diet.

Besides many concerns about health – human health, the health of the earth, and the economic health of local foodsheds – the heart of the CGC’s mission is the goal of inspiring producers and consumers to explore the bounty and richness of the world of grains they’ve been missing. The grain renaissance is also about flavor, creativity and experimentation in the kitchen, the pleasures of eating good food and the satisfaction of knowing where, how and by whom it was produced.

“There is so much flavor, pleasure and beauty for people to experience from the bounty of grains that are now available, and we want to share that,” says Mona Esposito, advocate of grains, also dubbed  as “The Grain Lady.”

The CGC places particular emphasis on heritage and ancient grains, as well as modern “open source” (not patented, and not GMO) varieties that are bred to thrive in particular climate and soil conditions. Two examples of heritage grains are already listed on the Ark of Taste: the “White Sonora” wheat, which Spanish missionaries brought to the American southwest in the late 17th century, and “Turkey Red” wheat, which Mennonite farmers who left Ukraine in the 1870s brought to Kansas.

A New Commitment to Regenerative Agriculture

Consistent with the core values of the Slow Food movement, the grain renaissance reflects a global rise in sensibilities about food provenance, food safety, human health, sustainability, environmental stewardship, good labor practices, cultural appropriateness, and the aesthetics and pleasure associated with “real food.” Chief among the players bringing about these changes are the farmers who are experimenting with growing heritage and ancient grains that do best in Colorado soil and climate conditions. Rather than relying on excessive uses of water and chemical inputs to grow grains, a new generation of farmers is committed to regenerative agriculture that builds soil and emphasizes the appropriateness of a crop for the environment in which it is grown. 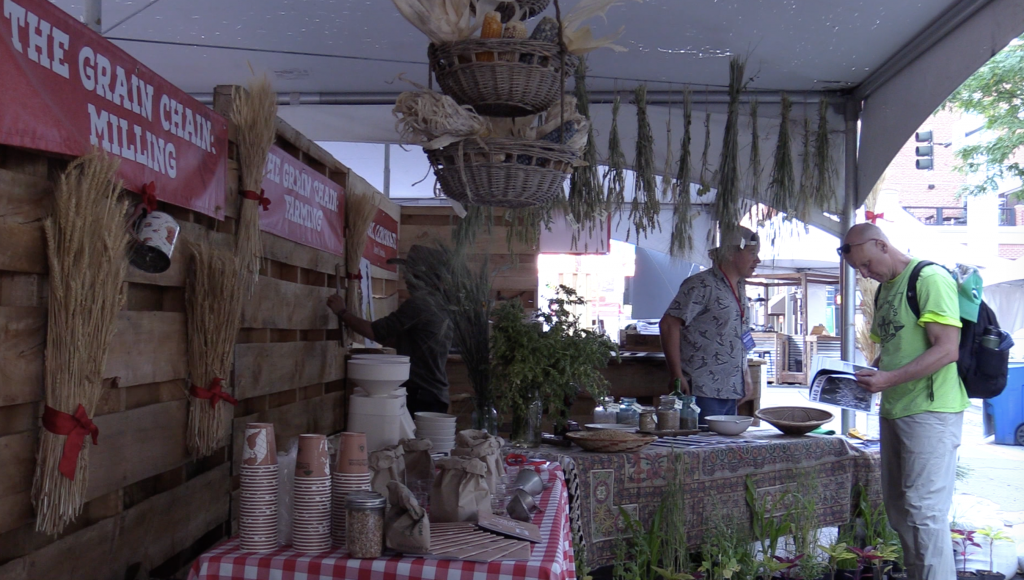 Just as wine producers talk of “terroir” – the qualities of climate, soil and growing conditions that give a unique flavor to wine – we are now seeing a rise in consciousness about how particular types of grain can give us the best and most unique flavor that a particular place has to offer.

Since its beginning, the Colorado Grain Chain has had an intimate and direct relationship with the Slow Food movement, through cooperation with “Slow Food Boulder County” and “Slow Food Denver.” Over the past two years, Slow Food Boulder County has partnered with the founders of the CGC to hold local events promoting grain literacy. And one of Denver’s largest summer festivals for the past three years has been “Slow Food Nations,” where the life of grains, from farm to table, has been celebrated.

Andrew Calabrese is Professor of Media Studies and Associate Dean for Graduate Programs and Research at the University of Colorado-Boulder. He is a founding board member of the Colorado Grain Chain, and is producing a feature-length documentary about the grain movement, titled “Grain Changers: The New Food Artisans”