Archive » The Gold of the Khasi

It is believed that the Khasi mandarin has the power to drive away anger in a person. If you have maddened somebody, locals will tell you to offer them the fruit to dispel their rage.

The Khasi mandarin (Citrus reticulate), locally known as Soh-Niamtra, is sweet, pulpy, and succulent, compared to its tangier and less juicy cousin, the orange, for which it is commonly mistaken.

It is found only in the Meghalaya state of north-east India, and primarily grows in the sub-mountainous tracts along the steep terrain of the Indo-Bangladesh border. Here, the landscape is entirely covered in Khasi mandarin trees, which during the winter months transform the setting into a valley of gold.

Most of the mandarins, which begin to appear in September when temperatures start to dip, make an arduous journey to the markets from the villages of Mawphu, Tmar, Pyndengmawlieh and Nongnah. They are packed into bamboo woven baskets, and are often carried up or down steep hills to vehicle accessible roads to finally reach the markets. In a single trip, a porter from Mawphu will carry 90 to 100 kilos of the fruit up a flight of around 10,000 stairs, the only connecting path to the main road.

A traditional crop of the region, the Khasi mandarin has always had an important presence in the daily lives of local people. Not only is it a popular and delicious food that is a mainstay of the winter season, but it is also a major source of income.

Its cultural importance is apparent in the reverence and care with which the mandarin trees are grown and maintained. Only the seeds of the healthiest trees are saved and planted, and only the healthiest saplings are moved to the orchards. Khasi mandarin producers, who maintain traditional plantation practices, ensure that each plant is given individual attention. When a sapling is shifted from a nursery to a permanent location, it is replanted in the exact same orientation with respect to the four cardinal directions. It is believed that a Khasi mandarin farmer and a plant must always face each other during plantation or else the plant will not grow. 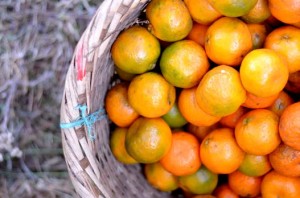 All the communities that grow the Khasi mandarin have diverse traditional techniques of fruit storage. Some store harvested fruits inside sandy pits, others place them on the top of hearths in their traditional homes. The mandarins are available until March and sometimes even April thanks to these preservation techniques.

Today, most mandarin-producing households have at least 200 trees in their orchards while some farmers like Bah Running Thabah from Tmar keep about 4,000, and depend almost entirely on mandarin production.

The growers share a special connection with the mandarin, yet with the passage of time, the connection has weakened leading to a drastic drop in production volume and even number of trees. The mandarin trees are becoming more vulnerable to pest attacks and many farmers have observed reduced lifespans.

The Presidia project is an opportunity for the Khasi mandarin to reclaim its place as a fruit and plant of importance in Meghalaya, which will encourage local farmers to save their endangered traditions.

The Khasi mandarin Presidium project involves local Indigenous communities in the villages of Nongbah, Nongkdait, Nongkitieh, Tmar and Mawphu. Activities in this area are coordinated by NESFAS (North East Slow Food & Agrobiodiversity Society), which is also working to catalogue the local biodiversity.