The landscape of America’s heartland has changed drastically in the last two hundred years. From your car window, a monotonous scene blurs past: corn, soy, corn, soy, corn, soy… 158 million acres of United States cropland is now planted with corn and soybeans. The majority are genetically modified crops that are fed to livestock or are highly processed before reaching a person’s mouth. This story is familiar, but there is also another one to tell. 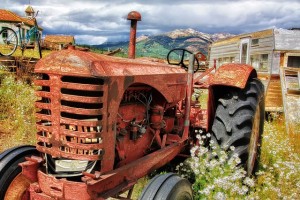 Turn off the highway outside Fairbury, Illinois, and you’ll find land that has been farmed for nearly two centuries, by eight successive generations of the Spence family. But this isn’t a story about the past; it’s about the future.

Twenty years ago Marty and Kris Travis, along with their son Will, took over Spence Farm to fulfill a promise to Marty’s grandmother. She wanted the land to be rescued from the industrial agriculture that had taken over during her lifetime. Marty recalls: “Looking at our family farm, we saw we were eroding diversity too. For us to survive and for this farm to be sustainable, it was imperative that we increased diversity again.”

Spence Farm soon attracted real food allies from the big city, Chicago. In 2013, Spence Farm was cultivating 217 different crops; raising poultry, pigs and cattle; harvesting wild foods from the forest; and, with some help from volunteers at Slow Food Chicago, producing gallons of maple syrup tapped from their trees.

Chicago chefs were immediately hooked by the flavors of some of the unique Ark of Taste products, for example, the nutty Tuscarora white corn that is a central piece of star-chef Rick Bayless’ menu, and the slow-growing Guinea hog that produces deeply flavored meat, now in high demand.

Chef Chris Pandel from Chicago’s The Bristol uses the Guinea hog on his menu. He found a creative partner in Marty Travis. They challenge each other to experiment on the farm and in the kitchen. Having spent the first 15 years of his career thinking of food as, “something to manipulate and put on a plate,” he says this relationship, “changed my perspective. It is my job as a chef to help other people and allow family farmers, surrounded by Monsanto, to understand that they can see past all that bull**** and sustain themselves as human beings for the rest of their lives.”

It wasn’t long before Spence Farm couldn’t fill the growing demand from chefs. This is when Travis saw an opportunity to make his grandmother’s dream a reality. He brought his neighbor’s farms together to form “The Stewards of the Land”, one of the now 240 food hubs across the country that connect small farms directly to consumers. Food hubs are creating communities of co-producers and building a viable alternative to the industrial food system.

Donna O’Shaughnessy and her husband, Keith Parish, were some of the first to join.  They raise Ark of Taste Red Wattle hogs.  The “Stewards” connected them to chefs who wanted “not just a special kind of meat, but meat delivered in a special kind of way, as a whole animal.”  The rural to urban community embodied in the food hub created relationships that allowed both chefs and farmers to practice their artistry.

Every summer, farmers from the Stewards of the Land teach chefs about real food at an event known as Chef Camp. Chef Camp is run by the Spence Farm Foundation; an independent non-profit organization that mentors future farmers. Foundation board member Thomas Leavitt says, “The change that we have to make in the food system has to start young.”  The Foundation works in local schools to provide education on sustainable growing methods and real food. They also carry out training for new food hubs in places such as South Dakota, Pennsylvania and Kentucky, and collaborate with Slow Food chapters, bringing together a vibrant community, in the countryside and in cities.

This is a story of hope.  Hope is growing in the fields of the U.S., but it has not edged out the threat that the industrial food system poses to the environment, our health and our cultural wealth. Thinking of his citizenship in the global community, Marty says, “We all have to do our part,” and first of all, “it has to be on the scale of a farmer and a family.”  The story of hope belongs to real individuals: The tens of thousands of people who are Slow Food USA, creating and living powerful stories of hope every day.