The Food is Culture cooking challenge has begun! More than 40 cooks from Sweden and Italy accepted the challenge! 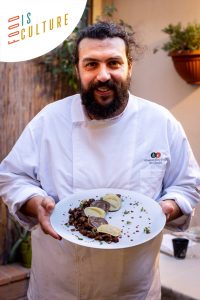 One of them is Christian Borchi, from Tuscany.

As a member of the Slow Food’s Cooks’ Alliance, Christian Borchi did not hesitate to join the Food is Culture contest which will be playing out over the coming months.
At his restaurant, L’Antica Porta di Levante in Mugello, eastern Tuscany, surrounded by the Tuscan-Emilian Apennines, he has combined a set of ingredients, ranging from local endangered products on the Slow Food Ark of Taste catalogue to more recent arrivals such as potatoes and coffee. The recipe is for “Bicolored ‘Bottoni of Fresh Pasta and Coffee, filled with Mountain Potatoes from Mugello and Tarese pancetta from Valdarno, accompanied with a sauce of Bardiccio sausage, Coppa from the Mora Romagnola Pig, Certaldo Onion and an intense splash of coffee”.

It’s an expression of himself, his territory and his philosophy. The idea takes inspiration from the typical potato-filled tortelli of Mugello, but is transformed into something more than that. We all know that, especially from an outsiders’ perspective, Tuscany is often seen as the 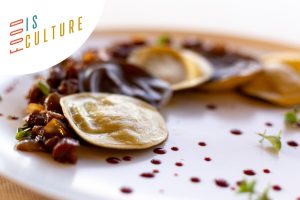 archetypical Italian region, and so its cuisine may be stereotyped. In this culinary climate, creating something new is not easy, as innovation may be rejected or seen as an empty gesture. At his restaurant Christian is searching for a balance between old and new, a balance that intrigues as much as it makes sense to his costumers. Christian’s philosophy is simple, in line with the great thinkers from antiquity who’ve said the same thing: You cannot think, love or sleep well, if you haven’t eaten well first. Good luck in the contest!

The contest is part of the project “Food is Culture”, a project funded by the European program Creative Europe, a collaboration meant to make European citizens aware that food heritage is a way to express a belonging to Europe and to better understand the richness and uniqueness of Europe’s cultural diversity.
The virtues of the cooks and their sensibility towards a disappearing food heritage will therefore live on for a long time and hopefully reach the table of a multitude of European families, no matter they arrived yesterday or centuries ago.