Archive » The federal election in Germany: The future of our food is at stake!

The year 2021 is an important political year for Germany with the national federal election on the 26th of September and six regional elections which took place or will take place throughout the year.

In this super-election year 2021, more than in any previous year, the future of our food is at stake. That is why Slow Food and Slow Food Youth Germany are calling the federal election in autumn to be a food election. In the weeks and months leading up to the election, the campaign “Spice up the future: for a food policy that tastes good!“ experts and chefs have been presenting their ideas and recipes for an integrated food policy during cooking workshops and panels. Slow Food wants to motivate consumers to use their voice and hand out concrete demands to politicians.

The Federal Minister of Food and Agriculture Julia Klöckner (CDU) has mobilised a number of people and committees in recent years: An animal welfare commission met. A Commission for the Future of Agriculture presented a real forward thinking model for sustainable agriculture in Germany last June. The Scientific Advisory Council of the German ministry of agriculture even published a groundbreaking study in summer 2020. But what remains at the end of all these commissions? The death of farms and foodcrafts didn’t stop, agriculture’s contribution to climate and species extinction has not decreased, the suffering of animals in many German stables continues, and the EU Common Agricultural Policy, despite many ideas and at least some improvements, remains stuck in the old system instead of consistently implementing the necessary change of direction in the interest of the common good.

Time is pressing. For we are heading ever faster towards dramatic tipping points: once too many species have become extinct, entire ecosystems will be lost forever. If small farms are no longer there, it will hardly be possible to start them up again; the same applies to food artisans. If the climate exceeds certain levels, it triggers uncontrollable consequences. And food and the people who produce it are both victims and causes of these planetary crises. German policy, however, has so far addressed them too little and not strategically enough. Incentives and voluntary commitments are not enough. That is why Slow Food Germany and Slow Food Youth are certain: the next federal election is a food election. 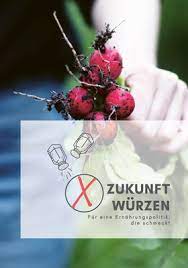 “We need the transformation now,” says Nina Wolff president of Slow Food Germany. “Our food system is fundamental to the health of the planet and of people. The situation is urgent, we need to bring about change in the next ten years in order to secure biological and cultural diversity in food policy.” The Board of Slow Food Youth Germany adds: “For us, this means that we now have to set thematic priorities with the election. With the Slow Food campaign, we want to motivate young people in particular to engage with food policy and use their voice during the election.”

What has Slow Food done?

For Slow Food Germany, the objective is clear: we need to build food systems that are resilient to ecological crises and ensure social balance.  An integrated food policy must be a central task of the next federal government.  Slow Food and Slow Food Youth Germany have therefore developed these seven concrete requests:

As part of the campaign “Spice up the future: for a food policy that tastes good”, we discussed these with different actors. The symbolic core of the campaign is a spice mixture of seven ingredients that stand for the seven requests. The spice mixture  was handed over together with the requests and “recipes” for a sustainable food system to political decision makers.

But this wouldn’t be a Slow Food campaign if it didn’t reconcile pleasure and responsibility, make highly political issues digestible and tasty! That is why Slow Food Youth organized a series of cooking webinars in which the most urgent requests were cooked up. One cooking class, for example, revolved around the topic of seed diversity, one around climate, another around fairness, and a final one around food appreciation. After all, says the Slow Food Youth Board in Germany, “We want to spice up the future. We are concerned with the near future after the federal elections. We are initiating this political campaign together with Slow Food to advocate for food policies that taste good.”

In a workshop discussion with the World Food Institute we also discussed the possibility and potential shape of a policy department dedicated to “sustainable food” together with politicians from the democratic parties in the German Parliament. Slow Food and Slow Food Youth Germany agreed: “Everyone must be able to enjoy high-quality, environmentally friendly and fairly produced food. In another panel, which included Marta Messa, the head of Slow Food’s Brussels office, the focus was on EU priorities in agricultural and food policy. We discussed how the guidelines from Brussels influence German policy, as well as what opportunities a future German government has to advocate for the urgently needed change in these fields at the European level.
In addition to the events, a large part of the campaign work took place in the social media. Here, Slow Food informed about the topics of the seven requests, presented projects and initiatives that show alternatives to the current system and invited people to get involved themselves and make their voice heard for a new food policy.

All information on the campaign, background information and the complete list and explanation of the requests can be found at www.slowfood.de/zukunft_würzen.