Since the war broke out in Ukraine, industrial lobby groups & conservative policy-makers have instrumentalized it to try rolling back the EU Farm to Fork Strategy. The EU Food Policy Coalition, of which Slow Food is an active member, reacted in an open letter to the European Commission. Our message? The Strategy is the only way to preserve Europe’s natural environment and the health of its citizens. We must defend and implement it!

Last week, 90 civil society organizations, Slow Food Europe included, wrote an open letter to call on European leaders to accelerate the implementation of the EU Farm to Fork Strategy, in response to industrial lobby groups and conservative policy makers’ attempts to delay any policies towards sustainable agriculture, using the war in Ukraine as an excuse.

There is no denying that this tragic situation unfolding in Ukraine is having direct effects on the global food production and trade. The dependency of North African and Middle Eastern countries on imports threatens their food security, which in turn increases the risk of social unrest and conflict. In Europe, a surge in food prices risks affecting the most vulnerable – both farmers and consumers – who are already struggling to recover from the COVID-19 pandemic. But we cannot let human catastrophes be instrumentalized to undermine European environmental and social progress, embodied partly by the EU Green Deal and its Biodiversity and Farm to Fork Strategies.

Need a reminder of what the EU Farm to Fork is? Check out our FAQ!

Attacks on the Farm to Fork Strategy are not new (read our article). Corporate lobbies have been painting apocalyptic scenarios for the future of EU agriculture and using fear to promote their private interests since the European Commission announced its plans to transition to sustainable food systems. This time around, they argue that the Ukraine crisis leaves Europe no choice but to increase food production by getting rid of environmental constraints in farming, or else Europeans would go hungry. As observed by Birdlife, “Everything from pesticide and fertilizer reduction targets to the upcoming EU Nature Restoration law, are now under fire because of “food security””.

Attempts to roll back the #EUFarm2Fork by industrial lobby groups & conservative policy-makers in the wake of the #UkraineWar are misplaced + short sighted. Civil society calls on the EU to implement the strategy and shift towards #agroeocology!
Our letter https://t.co/vvhNeLg73J pic.twitter.com/ar5kUqULE5

At first sight, their argument seems to make sense. The war in Ukraine is disrupting food supply chains and disrupting agricultural commodities imports, so Europe needs to produce more to compensate. But as pointed out by Frans Timmermans, Vice-President of the European Commission, the reality is far more complex: “Please don’t believe in the illusion that you would help food production by making it less sustainable. The EU Farm to Fork is part of the answer, not part of the problem.”

A Rise in Food Prices in the Short Term

The price of food commodities is indeed rising, for two main reasons that have been clearly developed by the French think-tank IDDRI: the blockage of exports from the Black Sea and the fear of a shortage leading to further speculation. “This follows a steady rise in grain prices over the past six months, driven by the rising cost of gas and, in turn, nitrogen fertilizers (the price of which has risen more than threefold since January 2021). The conflict is thus exacerbating a trend that had already influenced fertilizer purchasing strategies and current planting. As a result, wheat prices on the futures markets are breaking records, at over €400/ton (as of 8 March), above the prices reached during the 2007 food price crisis”, comments the think tank.

“Don’t believe in the illusion that you’d help food production by making it less sustainable,” said @TimmermansEU while calls of prioritising food security over sustainability are increasing with @EPPGroup asking to put on hold the Farm to Fork strategyhttps://t.co/PAZZRT2DqE

Yet, the impact on European food markets is felt mostly by the European animal farming system, which relies more and more on imported feed. “These farms absorb 60% of cereals and nearly 70% of oilseed consumed in Europe in the form of concentrates, a large proportion of which is imported from world markets”.

What is at Stake

So, what do these facts tell us about the EU food system? They state loud and clear that it is highly vulnerable to any crisis (COVID-19 had already thrown that curtain open) and sustains an intensive, polluting animal farming system that in turn heavily relies on the import of biofuels to produce fertilizers. What opponents of the Farm to Fork really want is to keep the current lucrative agricultural model that damages the environment, poisons human health, and undermines small-scale farmers’ food autonomy and dignity. “What is at stake – at least in the short term – is not Europe’s “food sovereignty” […] Rather, it is Europe’s ability to maintain an intensive livestock industry that is competitive in the face of international competition and able to provide consumers with low-cost animal products”, analyzes IDDRI.

“The #EUFarm2Fork Strategy presents opportunities to prevent future food crises, and should not be thrown out for unclear benefits”. 👏 @IDDRI_ThinkTank https://t.co/cbaTigs8Bb

But a modern, industrialized agri-food model delivering low-cost meat and dairy is simply not sustainable. It may have been beneficial in terms of increased productivity, but its impact on the environment has been devastating: pollution, soil erosion, scarred landscapes, reduced energy resources and an overall loss of diversity, both biological and cultural. What is more, it is clearly urgent that we steer away from a model that relies so heavily on the use of oil-derived or oil-based inputs (fertilizers and pesticides, fuel for farm machinery).

The Real Threat to EU Food Security is Environmental

It is worth reminding that food security is primarily at risk due to climate change. Most recently, the Intergovernmental Panel on Climate Change (IPCC) highlighted that “Climate change will increasingly put pressure on food production and access, especially in vulnerable regions, undermining food security and nutrition”. Indeed, they remind us that global warming poses a severe threat to soil health, and ecosystem services such as pollination “undermining food productivity in many regions on land and in the ocean”. It also concludes with high confidence that agroecological practices and principles support food security.

If our soil is depleted, if vegetal and animal species are disappearing and if we drive our entire ecosystem to extinction, how can we possibly ensure food security? This is where the EU Farm to Fork Strategy comes in, as it is a policy that is guided by the long-term view. As stated in our open letter to EU leaders, rather than intensifying production, Europe must support farmers to undertake an agroecological transition, notably by ensuring they and farm workers have a fair income. In particular, we need to support small-scale agroecological producers as they are key to ensuring food sovereignty, and protecting food biodiversity.

THREAD. Looming food crisis caused by invasion of #Ukraine seen by “Big Ag” (agricultural lobby & their political allies) as an opportunity to throttle the EU’s Farm to Fork (F2F) strategy. But this could compromise future food security + puts animal feed over food. We explain: pic.twitter.com/3KP7WoO9yC

The organizations call for policies that “on the one hand, foster a reduction in the production of animals farmed industrially towards small scale extensive and animal welfare-friendly practices, through a just transition respectful of the right to farmers to have a fair income and, on the other hand, promote healthier and more plant-based diets.”

This much needed transformation can only happen if the EU implements the EU Farm to Fork Strategy, to preserve its natural environment and the health of its citizens.

Global food systems will continue to be afflicted by crises and uncertainties over the coming years and decades. By acting responsibly now, we will ensure that Europe is well-placed to face possible future crises.

We’re calling upon the global Slow Food family to support Ukraine through:

Check out our Donate page to know more about the projects and how you can support ! 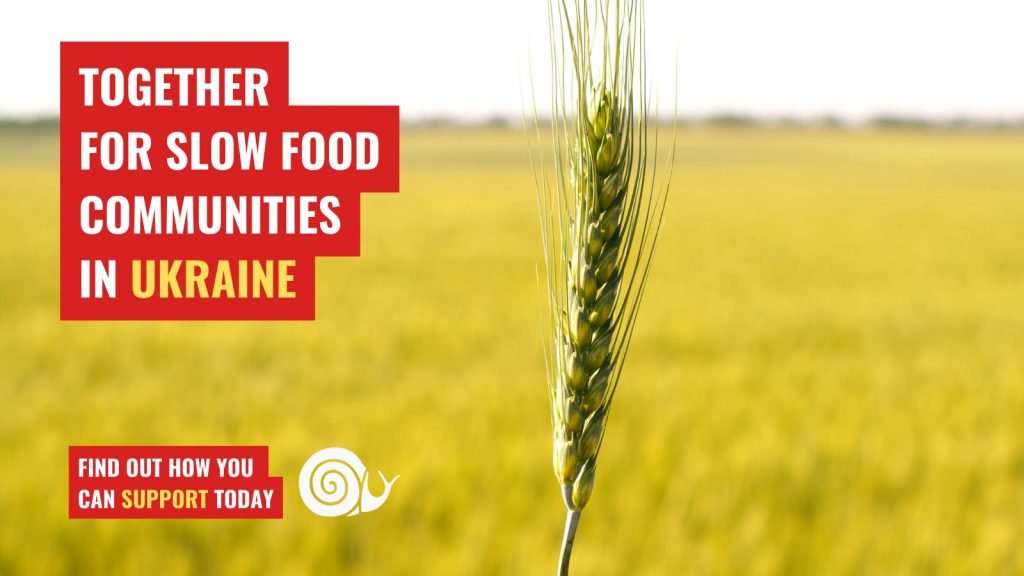