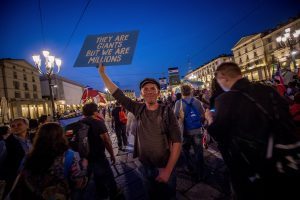 Today the European Court of Justice decreed that new organisms obtained from mutagenesis* are subject to the same security controls that apply to GMOs.

“Today’s ruling is a historic one, on which, however, Slow Food must remain vigilant at the level of individual Member States to ensure that new biotechnologies and GMOs are treated equally and that there are no loopholes resulting from questionable interpretations. Nevertheless, if [organisms obtained by mutagenesis] had not been equated to GMOs, it would have been devastating, both in terms of transparency toward citizens and for small-scale agriculture that respects the environment and biodiversity. As soon as we leave the fields and enter the laboratory, giving life to vegetables produced ex novoand without regard for the conditions of the territory in which they are traditionally cultivated, we take away the traditional role of farmers and enter a situation that cannot guarantee security. There is also another aspect to this: It’s one thing to trust public research that is undertaken in the interest of all citizens and not for the sake of patents, and it’s another thing to proceed from the work of multinationals that invest their budgets and intervene in public debate for the sake of economic returns. Today’s ruling sends a clear political signal that bodes well for small-scale agriculture that respects biodiversity, not only in Europe, but across the globe.”

There will be opportunities to engage in this highly relevant debate on new genetic modification techniques and the role of GMOs in concentration power in the hands of a few multinationals during the upcoming edition of Terra Madre Salone del Gusto. From September 20 to 24, this international event, organized by Slow Food, the Region of Piemonte, and the City of Turin, will bring 5 thousand farmers, breeders, fishers, and food artisans from 160 countries to Turin, Italy, to discuss all of the threats that put agrobiodiversity in their home countries at risk and that jeopardize their ability to produce traditional foods with full autonomy.

*A GMO, as defined in Directive 2001/18/EC of the European Parliament, is “an organism… in which the genetic material has been altered in a way that does not occur naturally by mating and/or natural recombination.” Genetic modification techniques include transgenesis (introducing a gene from one species into another species), cisgenesis (moving a gene between organisms of the same species), mutagenesis (altering the genome of a species without introducing DNA), and gene editing (erasing, moving, and/or replacing part of an organism’s DNA, for example with CRISPR-Cas9).

Petra Molnárova is the soul of Trh Piact Mark in Bratislava. And she didn’t give up even in the face of the pandemic. The market had been reborn and had to keep on living. I’m Petra Molnárova and I’ve turned my passion into a job. I’ve always been passionate about local production and biodiversity and, …

FOOD FOR CHANGE 2021: RELAIS & CHÂTEAUX AND SLOW FOOD TOGETHER TO PROTECT BIODIVERSITY Thanks to the nominations of Relais & Châteaux chefs, 85 products in 28 countries have been approved to the Ark of Taste, the Slow Food project that saves foods at risk of extinction around the world: a goal that will be …