Archive » The Ark of Taste Mexico: Uniting Forces to Save Tradition

The Ark of Taste in Mexico compiles products, knowledge and stories of the gastronomic heritage. The results achieved over the years by the Arca del Gusto project thanks to the joint effort of the University of Gastronomic Sciences of Pollenzo, Slow Food and the Terra Madre network in collaboration with the Universidad Popular Autónoma del Estado de Puebla and the Universidad Autónoma de Querétaro.

This book presents a small sample of the richness of the country’s food biodiversity, highlighting the risks that are leading to the erosion of this heritage and the work that different local and international actors are doing to safeguard and rescue it.

In the article we present the interview to one of the authors of the book professor Paola Jeannete Vera Báez, anthropologist and Research Coordinator of the UPAEP Faculty of Gastronomy. 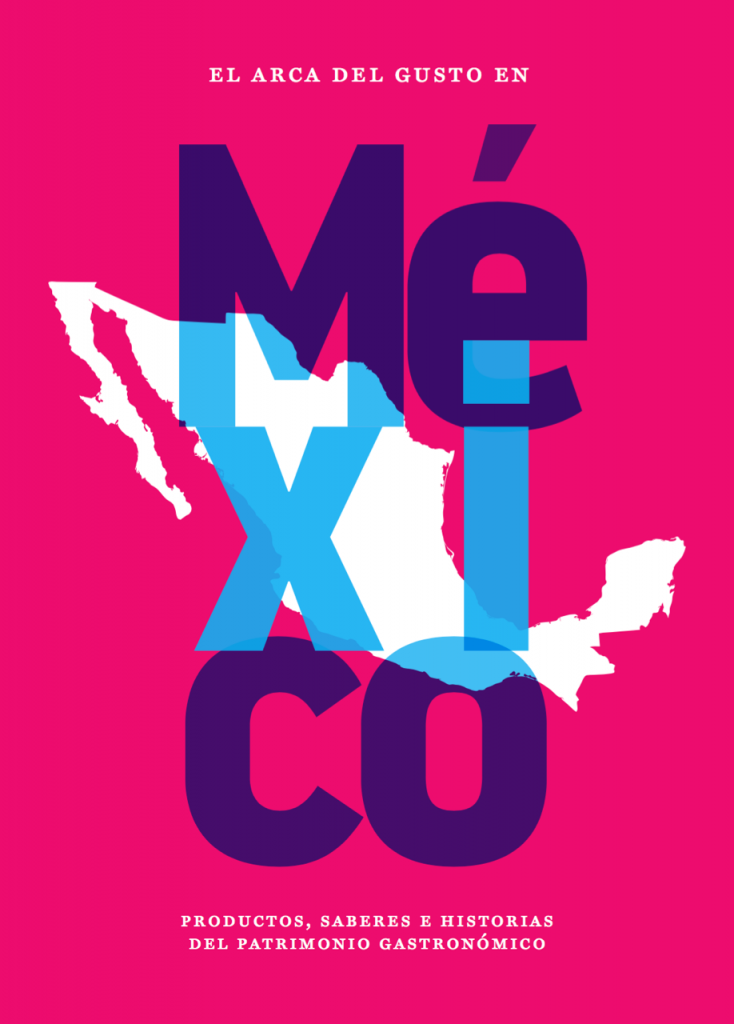 What are the motivations for you, together with your universities, to have committed to participate in the project?

For me, a fundamental motivation in my day to day is to contribute positively to the social realities facing the rural sectors of our country, not only in the professional field, but also personally.

On the one hand, I, myself, have suffered the injustices and inequalities that this part of the population in Mexico experiences as part of a family of small landowners who have seen how their lands, originally of traditional cultivation, have been violated and seized by resident, businessmen, politicians, and even religious groups, over the years. Perhaps some do not know it, but the poverty in the countryside and the exploitation suffered by Mexican peasants at the end of the 19th century were the main reasons for the start of the armed movement of the Revolution in 1910.

The existing agrarian problem in the country would come to an end -ideally- thanks to the Agrarian Reform, which sought to restore the land to those population centers that were stripped of it by large landowners, through various procedures indicated in the law and thus emerging a form of land tenure that was called “ejido”. My family and I have fought all our lives in the Agrarian Courts in Mexico, created specifically for the delivery of agrarian justice and to protect the rights of ejidatarios and comuneros in the country, defending our lands and raising our voices also on behalf of The ejidos and agrarian communities cannot do it, but it has definitely been emotionally and materially draining. On the other hand, as a culinary anthropologist, I have been able to verify how this violence to the traditional farmland in Mexico has generated a series of problems such as the decrease in food biodiversity with the subsequent loss of ingredients that as a child I continuously saw in the kitchens of my Mom and my grandmothers or on the family farmland. This causes me real grief and sadness, because current and future generations are missing out on one of the country’s greatest riches: our cultural and gastronomic heritage.

That is why, as soon as I was invited to participate in the editorial project “The Ark of Taste in Mexico”, I accepted immediately, because as an academic I believe that this is a contribution of the utmost importance for the rescue of our gastronomic culture, as well as for the promotion of responsible and sustainable food consumption through the promotion of local production.

Likewise, the entire team that is part of the UPAEP’s Faculty of Gastronomy participates in different interdisciplinary projects aimed at promoting the different communities in the country and empowering local producers. Actually, this is part of the mission of the UPAEP university: “to create currents of thought and train leaders who transform society”, which is why we were very interested in being part of this project together with the University of gastronomic Sciences “UNISG”, the Autonomous University of Querétaro “UAQ”, the Slow Food and Terra Madre network. 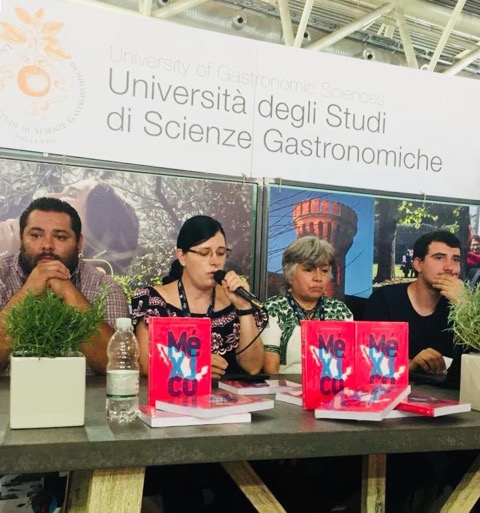 What has been your contribution?

My main task in collaborating on this book was to capture the use that has been given to each of them in traditional Mexican cuisine over time. To do this, first I had to briefly explain what this cuisine consists of, which represents a culinary tradition that has been passed down from generation to generation by the various civilizations that have inhabited the territory that today is recognized as Mexico, to later mention some very specific characteristics of this kitchen that have corn as their central axis. From there, I think the reader will be able to understand why the Mexican gastronomic culture refers to the defense of a way of life that involves a whole complex set of national identity and cultural symbolism: beliefs, rituals and worldviews, identity and social cohesion, continuity and history. Knowing and understanding the importance and the ecological, economic and sociocultural role of this heritage can represent a courageous resource for the future development of communities and the places where they live.

What is the biodiversity situation in your country and how much can the activities that Slow Food develops in Mexico and in the world help?

It is important to recognize that Mexico is, without a doubt, one of the most diverse countries in the world with approximately 12% of the biodiversity and almost 7% of the ecoregions on the planet -as Dr. Malda points out in this book-, in which a large number of ecosystems and vegetation types exist and develop. This obviously results in immense food biodiversity with the use of countless ingredients, both of plant and animal origin, in traditional Mexican cuisine since ancient times.

Despite this, this biodiversity is threatened day by day due to the indiscriminate use of ingredients and food products of industrial origin – the so-called “fast food” – and the environmental problems that especially affect the rural populations of the Country. Hence the importance that the various activities that Slow Food develops in Mexico have, promoting the rescue of the country’s gastronomic traditions, as well as the responsible and sustainable consumption of local products. The main thing is to promote the consumption of native and / or local ingredients in kitchens, together with our producers, to minimize this threat, as well as to counteract the impact that industrial production is having on food security and sovereignty. 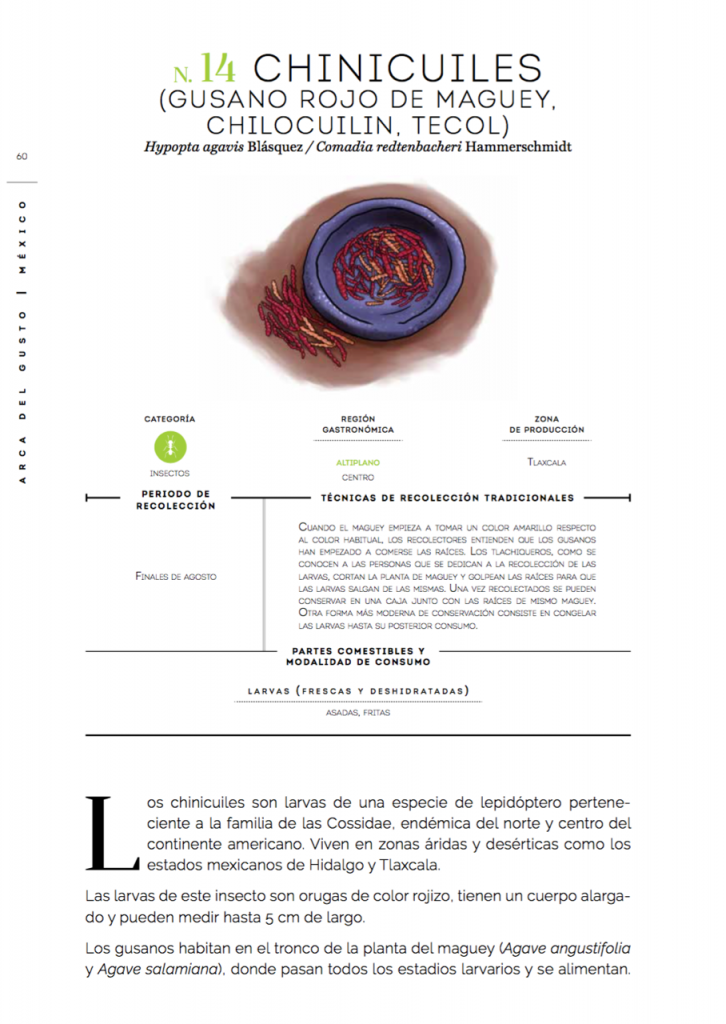 What is the importance of projects like the Ark of Taste in Mexico?

The existence of projects such as the Ark of Taste is definitely very important because, being a catalog of ingredients and food products in danger, its main focus is the defense, protection and promotion of the biodiversity of the cultural heritage of food in the country. This book also has the knowledge, stories and knowledge that people associated with certain foods have, which is important to know and disclose to avoid the disaster that is causing the indiscriminate industrial production of fast food worldwide, reflected in the loss of biodiversity, social destruction and food insecurity.

What are the products of the book that most aroused your curiosity?

Mexico has an unparalleled culinary wealth, which we can all corroborate in the traditional gastronomic knowledge of the different regions of the country. For this reason, more than curiosity, knowing the use that has been given in traditional Mexican cuisine to all the different ingredients and products presented as a catalog in this book, generates enthusiasm and encourages me to continue investigating it, from the products of plant origin, even those of animal little used in other gastronomies, as in the case of insects, including ahuautle, chinicuiles and escamoles.

It is known to all that this catalog has been insufficient given the immense amount of ingredients and products that we find throughout the country, that is why we continue to work together with the various institutions involved in the development of research projects, each focused to a specific gastronomic area of ​​Mexico. 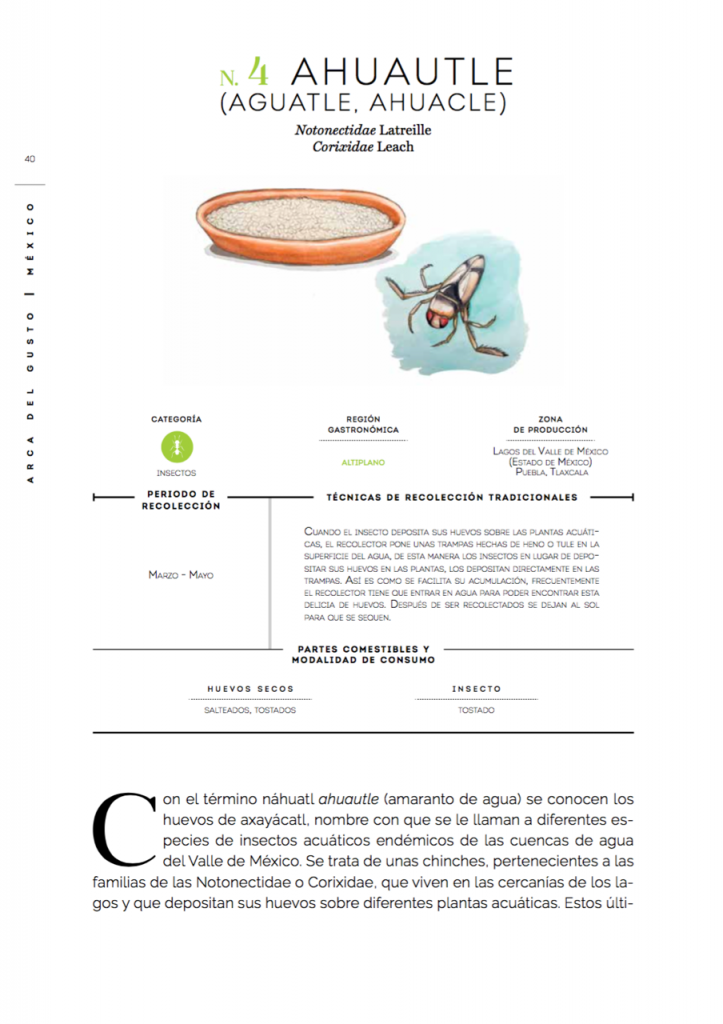 What has been the methodology for carrying out the publication?

The project is the result of a choral work that has had the participation and collaboration of various local and international actors: producers, Slow Food partners, academics, students, etc. It should be noted that small farmers, fishermen and breeders played a central role, sharing their traditional knowledge about food biodiversity and biocultural diversity. The authors together with the members of Slow Food México played a role of facilitators and cultural mediators, integrating traditional knowledge with their own, the result of years of study and research and commitment to safeguarding and promoting the environmental, cultural and gastronomic heritage of the Mexican territory.

An added value is, without a doubt, the participation of a group of students from the three universities in the compilation and revision of the book’s contents as well as in the realization of the graphic project. In particular, the students of the Mexican universities of the faculties of art and design supported the realization of the illustrations of the products presented in the book, thus contributing in a more artistic way to the safeguarding of Mexican biodiversity. On the other hand, the students were involved in the research together with the coordinators of the Arca del Gusto project and with the authors of the publication, contributing fundamental interdisciplinary knowledge to have a holistic understanding of the importance of gastronomic and biocultural heritage.

In short, to disseminate and promote the results of this work, the book was presented on different occasions both internationally – during Terra Madre 2018 – and throughout Mexico with the participation of the President of Slow Food Carlo Petrini.

Could you tell us a bit about the spirit of collaboration that has characterized the project and which should also represent one of the cornerstones of the Ark?

“The Ark of Taste in Mexico” aims to spread the national food biodiversity and rescue the country’s gastronomic traditions, as well as promoting responsible and sustainable consumption by promoting the production of local food products. The cornerstone of the project, in our opinion, is to try to counter food insecurity arising from the indiscriminate use of fast food and the industrial production of food.

THE GRIOT OF CARMIANO, RACONTEURS OF GASTRONOMIC TRADITION

In West Africa the griot was – and is – a poet, singer, musician and actor and storyteller: a living repository of oral tradition. The Griot of Carmiano, a town in the Salento peninsula not far from Lecce, are raconteurs of gastronomic traditions – and they don’t all come from Africa. Khadia is from Mali, Bisharu …

The New Farm to Fork Strategy: the Key Things Every European Needs to Know

Last week, the European Commission published the long-awaited Farm to Fork Strategy. The strategy, part of the European Green Deal – the most environmentally ambitious legislation proposal of the new Commission, which started its five-year term in December last year. The Strategy aims to make the European food system more sustainable across different dimensions and …

Ecological transition in agriculture is the only way to save bees

For some months now we have only heard of the ecosystem, the need to take care of it, the opportunity we have to change the way we operate. The emergency we are experiencing today, with human losses that have distorted the lives of many of us, asks us to look at the ecosystem in a …

SFYN Podcast: collecting stories from across the globe

Slow Food Youth Network (SFYN) is starting a new adventure: the SFYN Podcast! With the goal of giving a stage to the people, whose voices are often not taken into consideration, or who are simply overlooked in the debate around food, the podcast will share stories, interviews, advice, and experiences from the young members of …