The first five days of Terra Madre launch with physical and digital events have made it rediscover the Slow Food spirit all over the world, despite Covid-19. And continues until April 2021!

Feeding the Terra Madre network around the world, bringing together delegates, members, and activists around the most important Slow Food projects, and keep public opinion high on the issues for which the association fights, all the more so at this time when the spotlight is almost entirely on the health crisis: the first five days of this thirteenth edition of Terra Madre Salone del Gusto, at the time of Covid, followed the organizers’ intuition – Slow Food, Region Piedmont and the City of Turin – who accepted the challenge of experiencing an event revolutionized in the times, places and formats proposed.

This debut confirms that, even in the new format, the event manages to preserve the spirit that in past editions made it unique in the world and the ability to deal with the expert voices of international guests, on issues such as agri-food biodiversity as the only way to guarantee the right to good, clean and fair food for all, and to address the climate and environmental crisis, the distortions of the current system of production and distribution of food, and the economic and social inequalities caused by it. 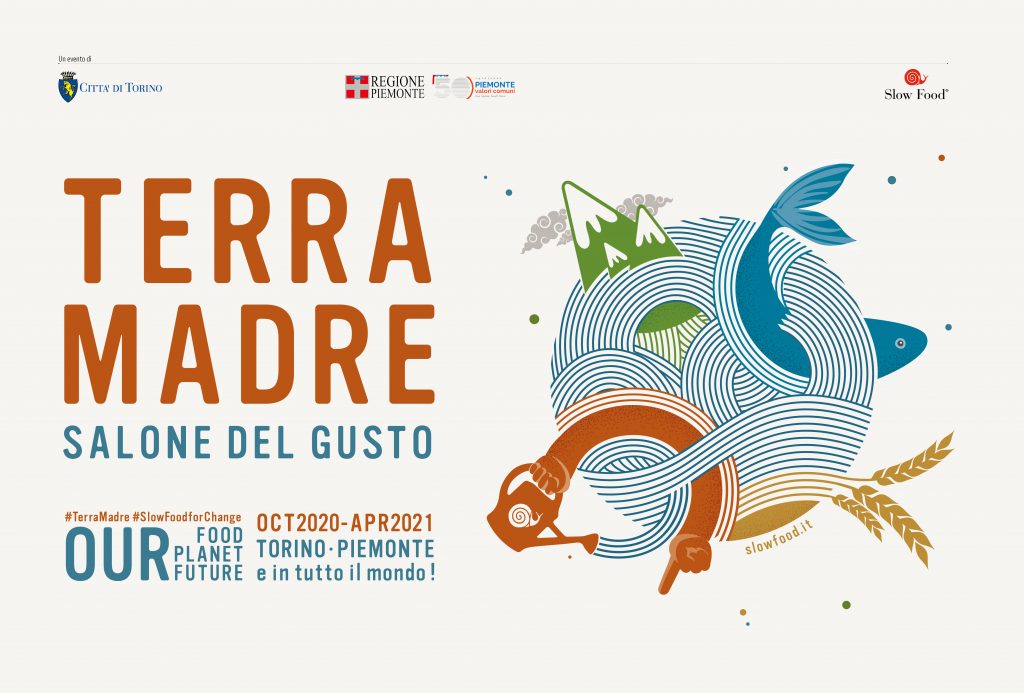 Furthermore, this new format allows us to reach a wider audience in every country of the world thanks to online content, in multiple languages, always available to visitors of the www.terramadresalonedelgusto.com platform, without time and space constraints.

All materials are available for free. In support of Terra Madre, but above all of the projects that Slow Food carries out day after day in every corner of the planet, a fundraiser has been launched “Support Slow Food: Acting together for the common good.”

“These first days of the event have constituted a very important benchmark: we tested the digital formats, verified the possibility of organizing physical events in complete safety and – above all – confirmed our ability to keep the “soul” of Terra Madre intact. During past editions, thanks to the direct dialogue, personal embrace, and the hours spent side by side in the places where the event has always taken place, it was easy to breathe in the air of magic that has allowed the birth of so many projects, so many relationships and guaranteed the consolidation of the Slow Food network itself. The feedback received in these first days confirms that we have taken the right path: the energy that flows inside Terra Madre manages to overcome physical distancing and promises us six months of events that will leave their mark,” comments Paolo Di Croce, general secretary of Slow Food.

An example of this energy is the alliance against food poverty between three large cities in Northern Italy (Milan, Turin, and Genoa), launched by the Milanese mayor Giuseppe Sala and immediately welcomed by the Turin-based Chiara Appendino and the Genoese Marco Bucci, based on concrete projects, such as actions against waste, the recovery of surpluses and food education. Another one is the Manifesto of good, clean and fair wine, launched in Italy by Slow Wine on a trip to the Fiera Sana in Bologna, which will bring together in a Slow Food community all the vignerons of the world who produce wine, guaranteeing cultural, economic, social and ethical growth in harmony with their territory.

Raising Voices Around the World

There has been no shortage of stories and suggestions from the Slow Food network: “I live in India, I work in India and in my world, we can see the impact of climate change happening in our lives. It is affecting the poorest, it is affecting the most marginalized. Let’s be very clear: if the poor are the victims of climate change today, the rich will also be victims of climate change tomorrow,” pointed out Sunita Narain, an Indian environmentalist and activist, and Director General of the Center for Science and Environment, who participated in the Asian episode of the global relay.

One of the most significant contributions published in the last few days is the video talk by Fritijof Capra, an Austrian physicist, economist, and writer, who opened the Food Talks series with an analysis of Covid-19: “The coronavirus must be seen as a biological response of Gaia, our living planet, to the ecological and social emergency that humanity has brought upon itself. It arose from an ecological imbalance and it has dramatic consequences because of social and economic imbalances. […] Ethical behavior, which means behavior for the common good, becomes an issue of life and death in a pandemic. Because a pandemic like Covid-19 can only be overcome by collective, cooperative actions.”

“We have to urgently rethink this model of society because everyone agrees that the best, and most nutritious dish is the one rich in variety and color. But the same logic isn’t applied on a social level. And we are afraid of monoculture. And “monoculturization”. Because any type of monoculture kills,” stressed Célia Xakriabá, Indigenous leader of the Xakriabá people, speaking from Brazil in the South American episode.

“Since the beginning of civilization, food has always been thought of as precious, and, all of a sudden, it’s not anymore. Suddenly we think food should be cheap and it should be easy. And so this is the starting point of our Slow Food revolution, food that regains value and is built on the values of stewardship, nourishment, equality, and diversity. There’s no better place than the public school system,” said  Alice Waters, an American cook, and author, and a food education activist, during the North American episode

The feeling of fraternity that binds delegates and activists, founded on the sharing of ideas and visions, common problems and possible solutions that transcend languages ​​and borders, has traveled through the digital network in the forums, in the words of the experts of the Food Talk, the Relay and the conferences and in recent days the themes of Terra Madre Salone del Gusto have touched, among others, Great Britain where the Terra Madre Fringe festival was held; Germany which started the activities by raising awareness among citizens on the impact of the CAP (Common Agricultural Policy) on our tables; the Philippines which inaugurated six months of physical and online events on food safety in crisis situations; Montenegro with the Earth Market of traditional products and local crafts with over 40 exhibitors in Bijelo Polje; the Rebato festival in Castielfabib, Spain, an experience of dialogue between urban contexts and nature.

“The raising of the contagion curve, which in recent days has affected the whole world, including Italy, confirmed the goodness of the decision we took in the spring: hosting thousands of delegates from every corner of the world would have been impossible, and even reduced formulas, with European if not only Italian delegates and exhibitors, would not have been feasible in safe conditions. Nor would they have had the expected effectiveness. In the widespread formats and activities we have witnessed in these first five days we have instead found new tools and languages ​​to achieve the objectives of Terra Madre and already from these hours we are working to enrich the six-month schedule. Meanwhile, the calendar for the next few days is already full of events: Terra Madre Salone del Gusto starts today! ” Di Croce continues.

Terra Madre’s journey continues with physical events to be experienced and digital events anyone can join from the comfort of one’s home. Here are the main events not to be missed:

The journey has just begun, stay tuned for more conferences and forums on the most important food topics around the globe today. Visit the Terra Madre website to find out more.