This week saw the first official presentation of the graphic campaign behind this year’s Terra Madre Salone del Gusto, to be held from September 22-26. Great changes are afoot for Slow Food’s flagship event, which is changing both location and name (previously Salone del Gusto and Terra Madre) – putting Terra Madre first, to give greater importance to Slow Food’s worldwide network of food communities – and stepping outside the exhibition halls for the outdoors, specifically Valentino Park, in the heart of Turin.

Indeed, Terra Madre Salone del Gusto 2016 will be an open event, spread around Turin’s parks, theaters, historical buildings and squares. At the center of it all will be the Market at Valentino Park – and in the spirit of including as many as people as possible, there will be no ticket required to enter, unlike in previous years.

Slow Food Presdient Carlo Petrini spoke of a two-way exchange: On the one hand, Terra Madre is opening itself to the city, but at the same time, it asks the city and the entire Piedmont region to open its doors to Terra Madre, specifically for families to host the delegates who will come to Turin from every corner of the globe. The theme of this year’s event is Loving the Earth, and as Petrini says, it means “loving the people who work the Earth, and welcoming them here as part of the universal comradeship of humankind.” 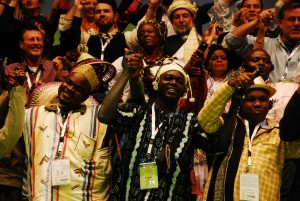 It goes without saying that hospitality is a touchy subject in Europe at the moment, and Petrini insists that Terra Madre be a beacon, an example for others: “We have to discuss loving the Earth in terms of human and social aspects, not only environmental. Our event is an act of international diplomacy – with Terra Madre we build bridges, not walls. Our event has formed friendships between farmers from Piedmont and nomads, artisans, producers, fishers and herders from across the world, who can go back to their homelands speaking of Turin and Piedmont with joy.”

Of course, Turin cannot do it all alone. To make Terra Madre possible, families in small towns across Piedmont will open their doors to our international guests. Raffaella Firpo, who represents these families, explained how the benefit for the communities was both cultural and moral: “Not only does it allow us in Piedmont to meet people from remote parts of the planet, but when they are all here at the same time, it allows them to meet each other. It’s a uniquely enriching experience for all of us, something we may share once in a lifetime.”

Presenting the graphic campaign of this year’s edition, Damiano Gravili from Bodà, the design agency responsible for the graphics, told of how “the visuals form anthropomorphic icons of the different continents, composed of various images of food and the places where it is produced. The abstract geometry that divides them calls to mind the street grid of Turin, where the event will come to life, the squares and districts which will be ‘invaded’ by the spirit of the event, celebrating the protection of our planet.”

Ten years on from the Winter Olympics, Turin and Piedmont continue to demonstrate their openness to the world through the efforts of hundreds of volunteers and the dozens of associations that make Terra Madre possible.

“We hope that this year, even more than in previous editions, the great generosity of the Torinese and Piemontese will help Slow Food to guarantee hospitality for the delegates,” Petrini concluded. “Don’t be shy! Come forward and open your door to the world of Terra Madre!”

Terra Madre Salone del Gusto is organized by Slow Food together with the Region of Piedmont, the City of Turin, and with the support of Compagnia di San Paolo, Fondazione CRT and the Associazione delle Fondazioni di origine bancaria del Piemonte.