Along the coast of the Mexican state of Quintana Roo, the cradle of the Mayan civilization, lie the biosphere reserves Banco Chinchorro and Sian Ka’an, the latter declared a World Heritage Site by UNESCO in 1987. The two marine areas are formed by a complex system of beaches, small bays, mangrove forests and coral formations and are home to many of the plant and animal species typical of the Caribbean.

This marine and coastal system of extraordinary beauty possesses great biological and cultural richness, and forms a fundamental part of the Mesoamerican Reef System, the second largest barrier reef in the world. Thanks to the great diversity of habitats here, it hosts thousands of marine species and more than 60 types of coral, representing a key site for biodiversity conservation.

The Caribbean spiny lobster (Panulirus argus), known as chakay (“red fish”) in the Mayan language, lives in these crystalline waters at depths of up to 100 meters. This crustacean is an endemic Caribbean species that feeds on small mollusks and other species and represents the main source of income for the artisanal fishing communities living in the two reserves.

In recent decades, overexploitation, non-compliance with catching rules and irresponsible consumption habits have led spiny lobster populations to decline drastically. Therefore, it is essential to promote and support sustainable fishing techniques that respect the ecosystem and the lobster’s life cycle. It is also necessary to promote a model of careful consumption that takes into account reproduction seasons and phases, minimum fishing sizes and closure periods and rejects poached and illegally fished lobsters.

Since 2017, Slow Food, with the support of the European Union and together with local partners Friends of Sian Ka’an and Colectividad Razonatura, has been implementing the Slow Fish Caribe project. The project promotes the conservation of the biodiversity of the complex and fragile ecosystems of the Caribbean and its overly exploited coastal reefs, consolidating good practices for the sustainable use of the resources of biosphere reserves.

The first step was the recognition of the Banco Chinchorro and Sian Ka’an spiny lobster as a Slow Food Presidium, endorsing the commitment to collaboration among the communities, management institutions, academia and civil society that have supported sustainable lobster fishing in these marine protected areas. The ambition is to spread this successful model to other regions of the Caribbean.

The Presidium is made up of six fishing cooperatives that have developed and adopted sustainable and selective fishing techniques and have exclusive fishing concessions in the Banco Chinchorro and Sian Ka’an Biosphere Reserves. They have eliminated hook and net fishing, replacing it with loops and jamos, and have adopted a technique as part of the community co-management of fishing zones by sea plots in which artificial refuges called casitas are installed. The fishermen free dive to remove the lobsters from these shady spots, releasing the breeding females and the lobsters smaller than the legal minimum size. The lobsters are usually sold alive and whole. Their meat is highly appreciated by local cooks who often serve it raw and marinated with lemon juice, as traditional ceviche, grilled or in many other typical preparations.

Work is also being done to raise awareness among local consumers and tourists in order to spread knowledge about the most sustainable and healthy way to consume lobster, without endangering the survival of the species. For responsible consumption, it is essential to buy lobster only from authorized cooperatives, not to buy lobster during the closed season for fishing and always to choose local lobster of the right size, to avoid consuming juvenile specimens that have not reproduced yet.

As part of the “Taste Your Caribbean” campaign, which promotes the principles of responsible and sustainable consumption, Slow Food, together with Amigos de Sian Ka’an and the Colectividad Razonatura and with the valuable input of the fishermen of the Banco Chinchorro and Sian Ka’an Biosphere Reserves fishing cooperatives, has produced a responsible consumption manual. This booklet promotes the spiny lobster’s preservation and contains valuable information on how to ensure the lobster you choose is good, clean and fair. It answers questions like how to distinguish a legal lobster from a poached lobster, how to choose a fresh local lobster rather than one that’s been imported, what size the lobster should be and when the closed season is for lobster fishing. All this information and more can be found in the manual, which is available here 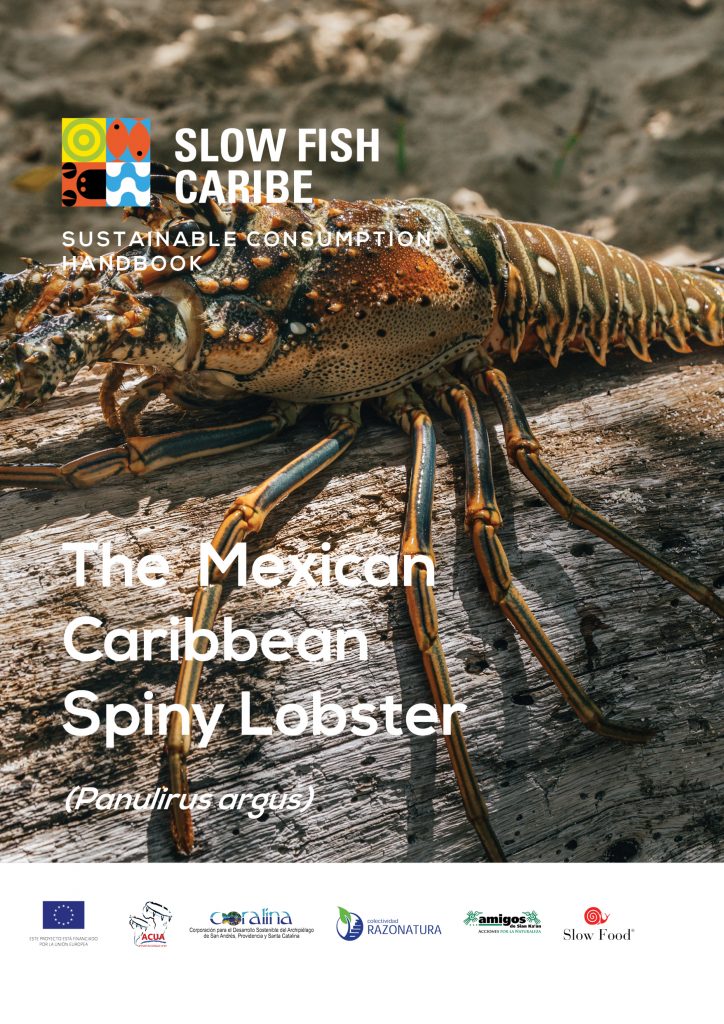 *The “Taste your Caribbean” campaign is being developed within the framework of the European Union-funded project “Slow Fish Caribe: Strengthening conservation and sustainable use models in Caribbean protected areas linked to Slow Food,” implemented in the Colombian archipelago of San Andrés, Providencia and Santa Catalina, where the Seaflower Biosphere Reserve is located, and along the Mexican coast of Quintana Roo, where the Sian Ka’an and Banco Chichorro Biosphere Reserves are located. It was launched in different dialog spaces in Colombia and Mexico, in collaboration with project partners and in collaboration with local organizations and public institutions.