“All or nothing” is Slow Food’s motto when it comes to meat. When we choose to eat meat, the animals must be respectfully raised, slaughtered and eaten. The international Slow Meat campaign includes all activities for education and awareness about meat consumption including quality, production and animal welfare. Since the first Slow Meat conference in Denver, Colorado (USA) in the summer of 2014, the issue of meat has risen to an international level as a central theme for Slow Food. 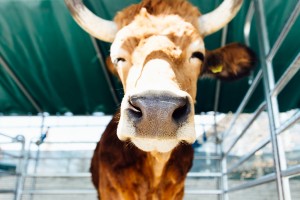 The focus was clear in this year’s Market of Good Taste in Stuttgart. The culinary tasting experiences and panel discussions devoted to this Slow Food fair revolved around sustainable meat production and meat consumption. There were talks regarding vegetarianism and veganism: do they improve the world of food? There was even an example of ecological breeding where it became clear that we absolutely need to reduce our consumption in industrialized countries in terms of having a sustainable food system, but that it is still possible to be ecologically sustainable as a consumer. 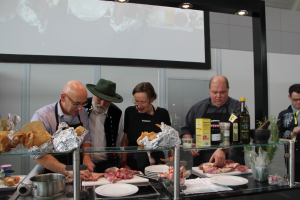 While the current, predominantly industrial system of meat production in Europe would lead to disastrous consequences, there are also valid alternatives: “70% of the protein-based foods consumed in the EU are imported, while at the same time we produce surpluses in the EU with two extremely destructive consequences. Firstly, the meat surpluses generate falling prices of products domestically,” said Anita Idel, lead author of the World Ag Report and Slow Food Ark of Taste commission member. “These surpluses also mean that we export a large amount of unwanted cuts of meat to Asia and Africa at extremely low prices, which destroys local markets. Moreover, in the context of the world’s food, it cannot be justified that 50% of the world’s grain harvest winds up in the feeding troughs of animals while animal feed in Germany is imported to a large extent. Therefore, our meat consumption should be based largely on meat from grazing animals, which additionally serve to maintain soil fertility.” 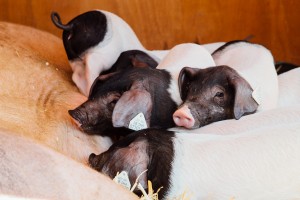 Fortunately, when buying meat, we have a choice regarding which system of production we will support. Rupert Ebner of the Environmental Affairs office for the city of Ingolstadt and board member of Slow Food Germany supplemented the panel discussion on the consumption of meat with a recommendation to consumers: “It makes the most sense to eat beef from animals that feed on grass so that their feed doesn’t compete with the food for people. The system of industrial mass production has to be rejected due to the use of enormous acreage of arable land for feed, but also for reasons of animal welfare, because of unacceptable living conditions. So, for instance, a conventional chicken producer has to push the limits of the animal’s intestinal health in order to raise heavier chickens and be able to survive in the marketplace.”

Karl Schweisfurth from Herrmannsdorfer Agricultural Workshops also confirmed that we need to rethink the way we raise chickens: “The chicken is an omnivore and was traditionally fed leftovers from the farmyard. We have to go back to these old ways, so that chickens are not in competition with people for the same food sources”.

The cooking workshop was devoted to the so-called “nose-to-tail” usage of animals. During these hands-on sessions, attendees were able to experience how to process the less noble parts or offal, including liver dumpling soup or a ragout of sweetbreads, tongue and legs – and how delicious these pieces of meat really are.