Archive » Stop Glyphosate: say no to the herbicide for our health’s sake!

An independent study finds consistent traces of glyphosate in a sample of pregnant women in Rome.

Since the International Agency for Research on Cancer (IARC) classified glyphosate as ‘probably carcinogenic for humans’, the debate raging round the world’s most used herbicide has mounted, while the license to use it in Europe has been renewed for the whole of 2017.

If you still have doubts about the fact that it is no longer tolerable to go on being poisoned by use of this substance, and if you still haven’t signed the European citizens’ initiative demanding for it to be banned from European territory, here we refer you to two important studies that prove how harmful it can be to our health. 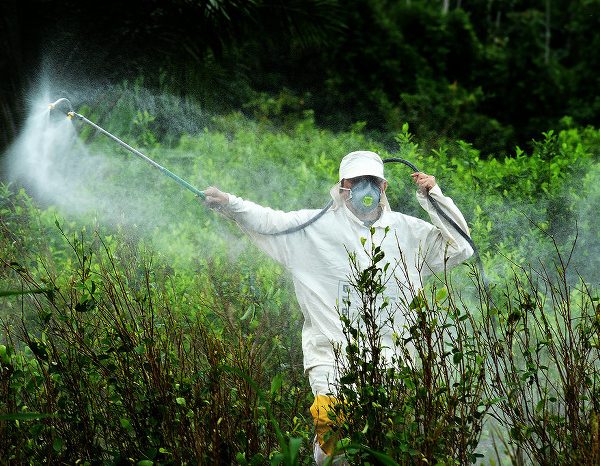 The first, carried out by the Italian magazine Il Salvagente in collaboration with the A Sud association, demonstrates how even people not in direct contact with glyphosate may contain traces of it. In April 2017, the magazine and the association commissioned BioCheck Lab of Leipzig to perform independent toxicological analyses on a sample of 14 pregnant women chosen in an urban context, the city of Rome. The results of the urine tests carried out by the German laboratory are alarming: all 14 urine samples collected showing a presence of glyphosate ranging from 0.43 to 3.48 ng/ml.

In another independent study that is still underway, Dr Paul Winchester is demonstrating how mothers with high levels of glyphosate in their urine have shorter pregnancies and their babies have a lower weight at birth, a fact that may lead to poorer cognitive skills during puberty and higher risks of metabolic syndromes.

The presence of glyphosate may be due to a number of different factors, above all diet and exposure caused by the proximity of cultivated fields, but that’s not the real point.

How much glyphosate should there be in urine anyway? The answer is none.

If it is true that no maximum levels of concentration have been established for the human body, the presence of this chemical substance is nonetheless unacceptable. Aside from its neurotoxicity and connection with different typologies of cancer, the herbicide should be considered as an endocrine interferent, associated with the onset of growth disorders, miscarriages, sperm abnormalities and reduced sperm counts.

The study of women in Rome was part of a broader Dossier produced by the A Sud, Navdanya International and CDCA associations, entitled Il Veleno è servito – glifosate e altri veleni dai campi alla tavola (Poison is Served: glyphosate and other poisons from the fields to the table), which describes the history, development and risks of synthetic chemicals in agriculture and offers an interesting overview of the effects of glyphosate in the rest of the world.

In the United States, for example, it was found in the urine of 93% of the consumers who underwent toxicological tests during a project launched by the University of California, San Francisco, California (UCSF), while Argentina is one of the countries most hit by the effects of industrial agriculture. Since the Argentine government opened its doors to the transgenic cultivation of RoundUp Ready soybeans resistant to RoundUp in 1996, there has been an explosion of cases of cancer and congenital malformations in the country, as may be seen in the images of photographer Pablo Piovano. In Colombia, finally, massive recourse to aerial glyphosate fumigation to eradicate illegal coca fields (a technique supported by the Plan Colombia, launched by the United States in 2000) has led to the pollution of rivers and soil and the evacuation of thousands of Colombians, besides of course the onset of serious oncological, hepatic, ophthalmic and epidermal pathologies.

Are there any alternatives to glyphosate? We think there are and that it’s worth thinking about them!

The European Chemicals Agency (ECHA) is likely to issue a recommendation soon, asking the European Commission not to classify glyphosate as carcinogenic. At which point, the Commission will submit a proposal for discussion by the Standing Committee on Plants, Animals, Food and Feed (PAFF). In the meantime, an information note has been circulated anticipating the Commission’s intention to renew glyphosate’s license for another ten years.


It is vitally important for us to make our voice heard and to sign the ECI. Eight hundred thousand signatures have been collected to date, so we are now close to reaching the target. Help us spread the word about the campaign. All it takes is your signature!