In Cuba, Slow Food members have signed up to the Slow Meat campaign, to promote environmental protection and food sustainability. Undoubtedly, having attended the Slow Meat 2015 event in Denver, Colorado, spurred Cuban members on to organize a local version of the event.

The production processes and consumption of food of animal origin create a complex global situation, with the development of irresponsible, unethical and unsustainable practices, which have a negative impact on human health and that of the planet. 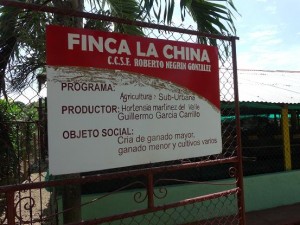 In Cuba, livestock farming and agro-industrial meat production are based on methods of farming, feeding and animal welfare that are intended to improve the quality of the product for human consumption, while avoiding damaging the environment.

Pig farming, in particular, is the biggest activity for domestic consumption. This is primarily because of the preservation of farming practices that are deeply rooted in the traditional agricultural system, as well as a result of the food preference of Cubans, who favor pork. Poultry farming is also important for egg and meat production; similarly, rabbit farming is growing and consumption of rabbit meat is gradually on the rise in the country.

Pork is industrially processed on a large scale, and asados have a special place in Cuban cuisine. Pig farming is extensive and, considering the predominance of this meat for domestic consumption, it’s now necessary more than ever to step up and implement awareness of animal welfare, since environmental conditions are not always ideal for farming. One of the most pressing problems requiring attention is pig slaughter at the local level, where compassionate methods should be used.

As for cattle, traditionally one of the most suitable areas for livestock farming is in the province of Camagüey, which is the island’s flattest region. Beef and veal consumption is relatively low in the country, but there has been an improvement in production because animal feed is improving thanks to the introduction of more nutritious fodder. Cattle are generally fed using local resources produced on the farm. For example, to improve the health conditions of animals, legumes and Leucaena are used, which yield better results in terms of production both in spring and in the dry season. When rain is scarce, shredded sugar cane, mixed with honey and mineral salts, is used for a better diet. 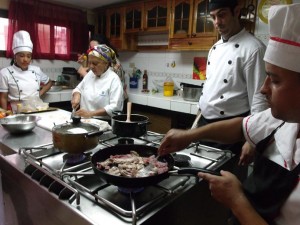 Strategic plan and good practices
Although in Cuba there is no prevailing concept of modern farming, based on high technology and productivity, strategic plans and good farming practices are based on a series of interesting premises.

Eat less, better quality meat
Slow Food members in Cuba have signed up to the Slow Meat campaign to promote environmental protection and food sustainability. The proposed action plan involves cooperation between specialists, producers, chefs, farmers and professionals from various Cuban institutions, such as the Cuban Animal Production Association (Acpa), the Research Center for Agricultural and Rural Development (Cedar), the Agricultural University of Havana and the Faculty of Pharmacy and Food of the University of Havana, as well as community projects and agro-ecological businesses.
Organizing a workshop at the Federation of Culinary Associations of the Republic of Cuba, from March 2 to March 4, 2016, was the most important activity. The workshop included lessons on meat consumption and its effects on climate change, cooking lessons and a visit to a farm where agro-ecological farming is practiced. With over 30 participants, the first steps were taken towards standards to guarantee a better future.