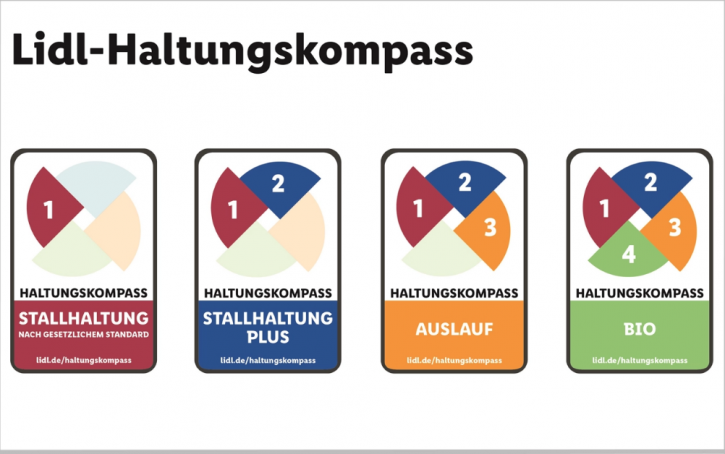 The latest news from Germany is that the Lidl discount chain (not exactly the sort of place where we’d choose to do our shopping, but that’s no reason not to give credit where credit’s due) is planning to provide consumers with clear information about the livestock farms of its meat suppliers.

From April, in fact, all Lidl fresh meat counters will feature a sort of easy-to-understand ‘livestock farm compass’. The system follows the now familiar criteria used for egg labeling: namely four codes but in reverse order (and here’s hoping this won’t cause confusion). Hence code 1 stands for ‘raised in barns’ in compliance with existing legislation; code 2 for ‘raised in barns plus’, which, according to Lidl, ensures animals more space and manipulable fodder; code 3 for ‘freedom of movement,’ which means that, besides having greater space, animals have had access to a covered outside area and been fed on non-GM fodder: code 4 for ‘organic,’ hence raised in accordance with existing legislation on organic meat, virtually the equivalent of code 0 for eggs (see illustration below).

With this labeling system, Lidl expects consumers to orient their choices towards products from the best livestock farming systems. In this way, it hopes in the long term to help raise animal breeding standards and welfare across the whole sector. Its declared target is to arrive at 50% code 2-labeled products at least by the beginning of 2019 and eventually to eliminate code 2 supplies altogether.

This isn’t large-scale retail’s first initiative in this area. In the middle of January, in fact, Aldi Nord and Aldi Süd introduced the ‘Fair & Gut’ label for fresh chicken products to their branches in South Bavaria and some parts of Hamburg and Berlin. The same two discount chains now intend to finance an initiative to improve animal welfare on their suppliers’ farms.

The upshot is that Greenpeace and the Bioland association of organic vegetable farmers are asking the government to introduce compulsory labels indicating type of livestock farm on all meats commercialized in Germany.

So all’s well then? Not exactly, for if the provision of greater information is more than welcome, just any label is arguably not enough. Maybe it would be a good idea to go a step beyond the compass and adopt something along the lines of our narrative label, the only model that really can give us information about the product we intend to consume. Above all, insofar as the code 1 and code 2-type farms shouldn’t exist at all, it wouldn’t be a bad idea for governments and institutions to start concerning themselves with the state of livestock farms. If they did, maybe we wouldn’t need compasses to guide us.

Today, unfortunately, we have to communicate sad news, news that we would never have wanted to give: the loss of an important member of our great family. Ursula Hudson, President of Slow Food Germany and member of the Slow Food International Executive Committee, left us on Friday after a courageous battle against a disease that …

Slow Food Europe supports environmental lawyers at ClientEarth, who have warned the European Commission that its failure to align the Common Agricultural Policy (CAP) reform proposal with new climate, environment, and biodiversity commitments under the European Green Deal may be illegal. In a letter to Vice President Timmermans,  ClientEarth says that the CAP reform proposal, with …

A few hours west of Addis Ababa, Ethiopia’s capital, the road begins to climb up between pastures and fields of grains and ensete – a tree similar to the banana tree, whose leaves and roots are used widely as an intricate part of the Ethiopian diet. After a while, it reaches the magnificent landscape of Wenchi, …

With the wave of the Covid-19 pandemic, the large agro-industry companies, along with governments in the Andean region, have been pushing for even stronger cultivation of the GMOs portraying it as a way to survive or create jobs or production.   South American Slow Food Network, composed of ten countries in the region, has been …

Burkina Faso lived at a snail’s pace in the last months of February and March 2020, just before the COVID pandemic arrived. Before the measures to slow the pandemic were implemented, limiting travel as much as possible, the Slow Food Burkina Faso network set up a project called “Laafi Riibo” (health food): a Slow Food …