“Let’s rescue some food and also some knowledge!”

That’s the rallying cry from Slow Food Youth Network (SFYN) this March, as their fourth annual World Disco Soup Day (on April 25th) takes on an extra dimension this year – reaching out to older generations, to work together in publishing a book of traditional, food waste-reducing recipes and fighting loneliness amongst elderly. 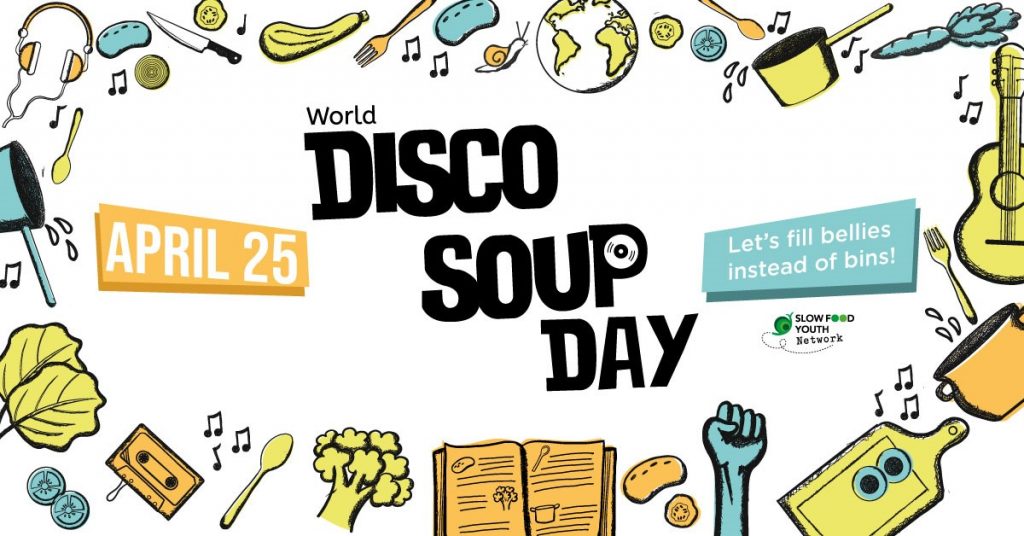 World Disco Soup Day (WDSD) is when SFYN groups across the world organize events at which perfectly good produce – which would otherwise have been thrown away – is rescued from landfill and used by a group of volunteer cutters, peelers, washers, choppers and chefs to make delicious meals for the public in a fun atmosphere, accompanied by music.

Over the past three years, SFYN’s World Disco Soup Day events have managed to save over 50,000 kg of food from being thrown away. This is a massive achievement for a zero-budget campaign, and it has been carried out thanks to a huge effort from SFYN’s grassroots activists at over 300 local events around the world.

However, SFYN has no plans to rest on its laurels and sit on its previous success this year. Instead, in addition to coordinating all the local WDSD events, SFYN are upping the ante and broadening the reach of World Disco Soup Day by running a crowdfunding campaign to support the publication of a World Disco Soup Day Book.

This recipe book project is in line with a new thematic direction SFYN are exploring to help increase their impact, to focus on the idea of Re-Generation. This encompasses not only regeneration of physical things like human health, the environment and our soils, but also building bridges and re-connecting with older generations, to enhance understanding and share knowledge.

For this reason, the book will focus on connecting with older generations, gathering traditional recipes and stories from elderly people living in communities across SFYN’s vast global network. In this way, SFYN hopes to make these older generations feel valued and important in shaping a better future for their descendants.

The recipes collected will be ones actively aimed at reducing or avoiding food waste – this could mean delicious dishes cooked using leftovers from the day before, traditional fermentation, pickling, and curing methods to keep fresh produce from going bad, or using up carcasses, vegetable stalks, stale bread, and other thrifty ways that grandmas have to make every scrap of food go that little bit further.

Before the World Disco Soup Day events kick off in earnest in April, SFYN will be running a crowdfunding campaign through Global Giving for two weeks in March, from March 9th to March 23rd. During this period, for the cost of a month of Netflix or less than a coffee and a sandwich, people can make a significant contribution to making this project come to fruition, as everybody who organizes disco soups is a passionate, unpaid volunteer.

Having the means to produce this book, and therefore bring awareness to a wider audience, could be a positive step in helping to change the habits that contribute to food waste.

As it currently stands, roughly one-third of all food produced that is fit for human consumption gets thrown away. The Food and Agriculture Organisation of the United Nations (FAO) estimates that rescuing just 25% of this amount would be enough to feed the nearly 800 million people who are currently malnourished.

In addition to the social costs and injustices associated with food waste, there are severe environmental costs, too. The high amounts of energy and inputs required to produce the food are wasted, while using more land to grow food in this inefficient system may encompass issues like deforestation, degradation of soils through chemical use and intensive methods, biodiversity loss, and ecological destruction (such as that caused by some methods of commercial fishing).

At the other end of the process, all the food that is thrown into landfill rots and releases harmful methane gas, and studies have estimated that food waste, across the entire production and supply chain, accounts for around 10% of total global greenhouse gas emissions – roughly the same as worldwide beef and dairy production. Cutting food waste to zero is therefore one of the biggest changes we can make to help fight climate change.

It’s true that people are becoming more and more aware of problems surrounding food waste, but it’s also true that we have a long way to go. That is why SFYN are accelerating their efforts to highlight all aspects of this global issue.

As well as allowing to spread even further the message of World Disco Soup Day – that we can fight global crises in a fun, positive way, and we can celebrate these positive solutions – this book could become a rare and crucial collection of traditional culinary knowledge for the future, since most of the people who hold this knowledge may soon be passing on.

If nothing else, World Disco Soup Day 2020 will be a lot of fun, and a good way for younger and older generations to reconnect and strengthen the bonds between our past and our future.

SFYN’s Global Giving crowdfunding campaign will run from March 9th – March 23rd, during which time it will be open to financial contributions. The goal is to make The Word Disco Soup Day book available through local SFYN chapters around the world later in the year, as well as at official Slow Food events such as the biannual Terra Madre/Salone del Gusto gathering in Turin this October.