Archive » Slow Food in Somalia: An expanding network of gardens

Somalia is famous for all the wrong reasons: it’s been called the most failed state in the world, and over a million Somalis have left the country over three decades of civil war. And yet, despite these incredibly difficult conditions, the values of Slow Food are thriving, all thanks to the hard work of dedicated farmers, the national coordinator and the local coordinators.

“The network of gardens is growing all the time”, Mohamed told us on a trip to the Slow Food headquarters in Bra, Italy. “When Slow Food in Somalia started in December 2011, there was just one convivium and 7 community gardens. Now there are 107 gardens and 11 convivia.”

The gardens have been up to now concentrated in just a single region of Somalia: Lower Shabelle. This also happens to be one of the regions of the country worst affected by the ongoing insurgency by different militia groups. Indeed, many of the Slow Food gardens are in territory currently under their control. “It’s a very difficult situation,” Mohamed explains. “Difficult even to believe for someone who hasn’t seen it. Though the different militias are not against the gardens in themselves, we are not able to document their existence officially, as it is difficult to use cameras. Principally, No body is against the philosophy of Good, Clean and Fair, the idea of the garden cultivation is vital for every person, at the same time they are very suspicious of Western influence, especially because of drone strikes. There is paranoia that people might pass GPS coordinates outside the country to aid American drones in targeting.” 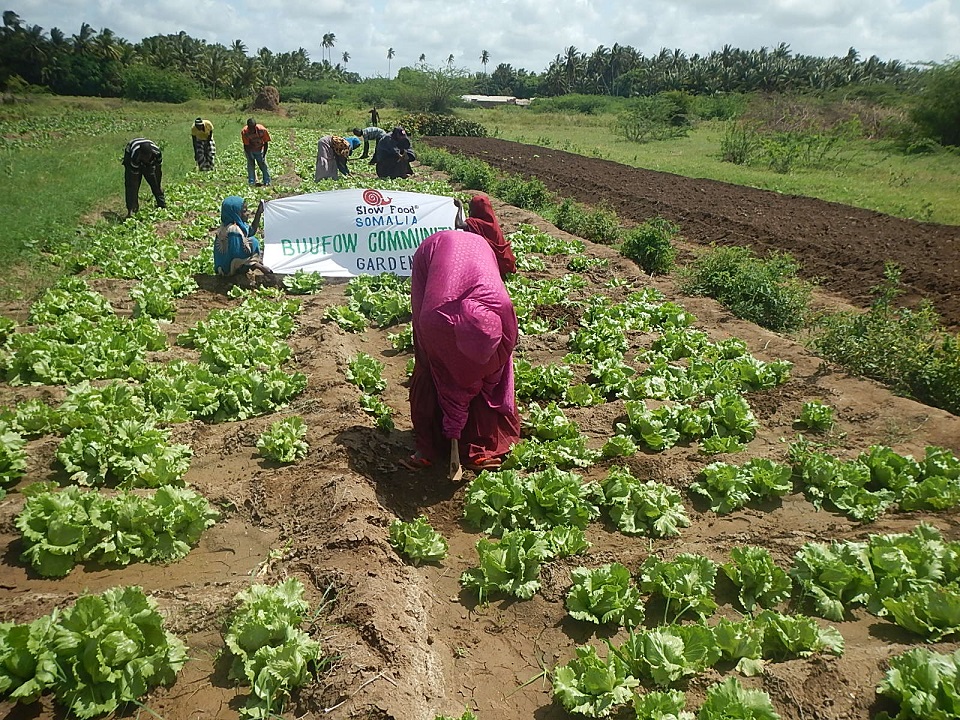 Mohamed tells us that the network of gardens is now going to expand into other nearby regions of the country, including Baidoa, the capital of the Bay region, and Hir-Shabelle. The whole country is in a process of federal restructuring, and Slow Food’s work has already been recognized by both the Ministry of Interior and Local Governments for South West State (which includes Lower Shabelle) and the Office of the Prime Minister of the Federal Government, who wrote to the United Nations in February acknowledging our association’s “determination and commitment to provide for vulnerable communities”.

Indeed, the usefulness of the food gardens is plain for all to see, and are an important element of community-building. “Children who learn agronomy in school can then have a dialogue with the elders, learn from them about seasons and plants, how to store seeds, and facilitate intergenerational exchange of knowledge.” This sort of direct dialogue is especially important in Somalia, which has one of the lowest literacy rates in the world. Only a quarter of women can read and write, and as they make up the majority of the farming population, it’s essential that they be empowered with the tools to increase their food sovereignty.

Though the network in Somalia was not able to celebrate Terra Madre Day last year due to security concerns, Mohamed tells us about a seasonal meeting held a month ago, in March 2017, where 110 people bringing seeds and Ark of Taste products. As the growing season begins in April, this was an important moment to motivate people for the coming year, with success stories shared, objectives set, and ideals of mutual aid reinforced. 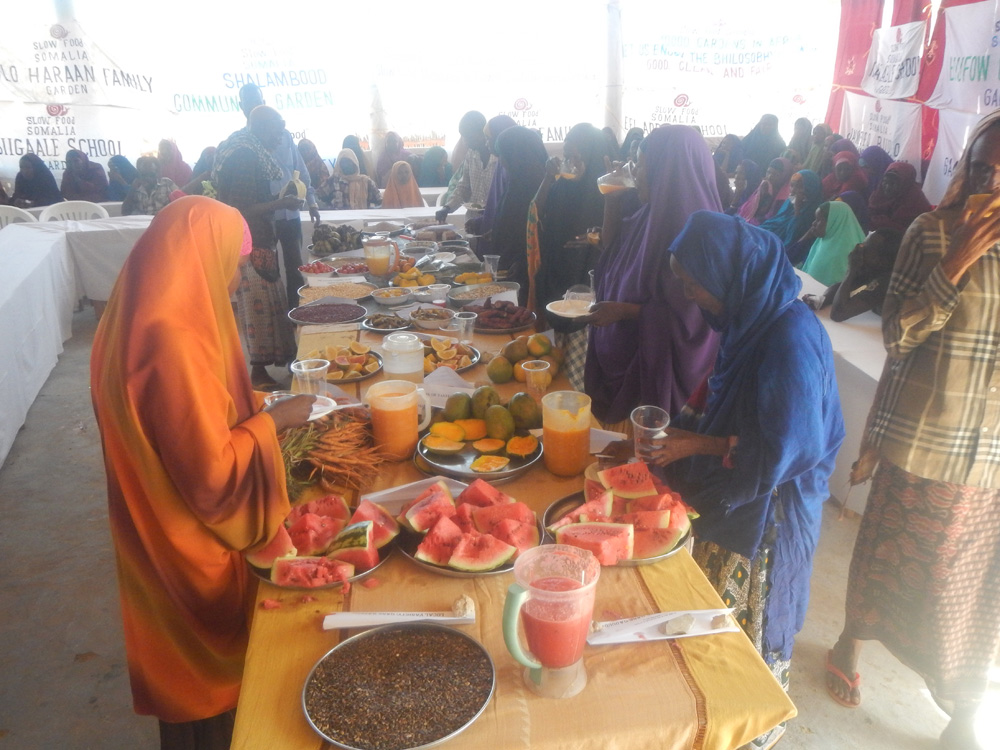 There are of course going to be major obstacles to achieving those goals, not least the low literacy rate and the ongoing security situation. There’s also been a severe drought blighting the country, with a variety of causative factors. As things stand, the WHO estimates that half the population is in need of humanitarian aid. With such little rainfall, farmers are forced to use river water to irrigate crops, drying them out. “The Shabelle river itself has dried up in the last three months,”, Mohamed tells us. “Some large-scale farmers use motor-powered wells to water their crops, but small-scale farmers don’t have any access. Slow Food Somalia was born when Sid Ali Mohamed Abdi gave land to free to small-scale farmers. Now they need water.”

With a final word of encouragement, the resolutely optimistic and ever-smiling Mohamed leaves us with this message: “The collaboration with the Slow Food Africa office, the guidelines and instructions you have provided have always been helpful for us. We would like to say our supporters and all the partners of the food gardens that we are very grateful for your support. We know that people who send contribute the gardens want to see results. Unfortunately, sometimes it is not possible. But in the near future the situation will improve, and you will all be able to witness the beauty of Somali food sovereignty for yourselves. With Slow Food, we are bringing communities together, as food is a common bond that unites us all.”