The Red Maasai sheep, named so for their typical red-brown, and occasionally pied, shaggy coat of hair, is an East Africa indigenous breed traditionally kept by Maasai pastoralists and smallholder farmers in Kenya, Tanzania, and Uganda. By the time being, these sheep are mostly found in the semi-arid regions of southern Kenyan and northern Tanzanian rangelands, especially in Kajiado County, Kenya and its neighboring counties.

The breed features large fat deposits in its tail and hindquarters and is kept primarily for its meat. Though less productive than some other breeds raised in East Africa, the Red Maasai sheep is valued for its hardiness in arid conditions and relatively stronger resistance to internal parasites. Other positive features of the Red Maasai sheep are the flavor of its meat, ‘sweet’ according to the Maasai, and its milk quality and thickness, which compensated the lower quantity, compared to Dorper sheep’s milk, in the opinion of the interviewed women.

The Red Maasai Sheep Presidium was established thanks to a collaboration between Slow Food and IFAD. One of its objectives is to strengthen the two Maasai communities involved through training, technical assistance, experience exchanges and the creation of marketing channels, with a particular focus on including women and youth. The communities were also involved in the national and international activities of the Indigenous Terra Madre network, a platform for sharing and exchanging experiences that helps indigenous peoples work together and find solutions to common problems.

With the aim to better understand this project, we are sharing the interview by Samson Kiiru Ngugi, Slow Food Coordinator, Nakuru County and overall assistant to the Country Coordinator, to Tunda Lepore- ITM Advisory Board member for East and Central Africa, Leader of ITM in Kenya and overall Coordinator of Red Maasai Sheep Presidium. 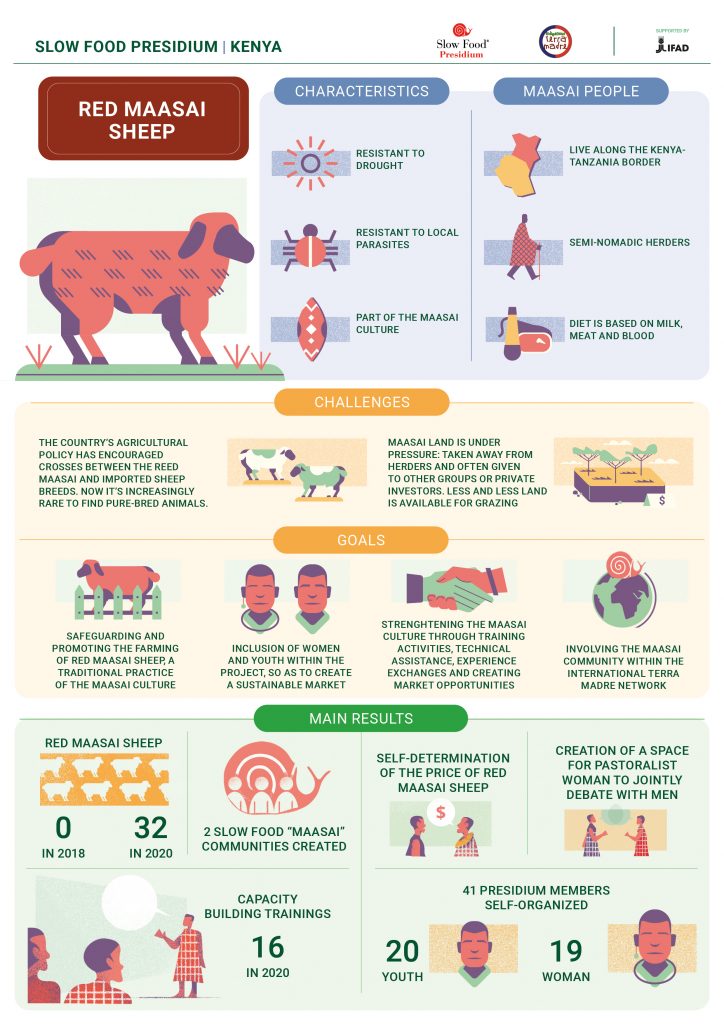 The Maasai Community setting was quite different 20 years ago. Many people used to live in the villages, including men, women, youth and children and every age had to perform specific activities e.g. young boys were in the fields holding sticks grazing cattle, goats and sheep; young girls had kids on their backs and their mothers carried water in mitungis (water containers) on their backs, young men were with their fathers away grazing animals in the plains and mountains. Some things have changed today. There are fewer youth in the villages because some are in schools while many others moved to cities, some searching for jobs and others working. Thus, many kids, with either their mothers or grandmothers and grandfathers can be seen around nowadays. Communal gatherings have declined over time as individual lives loomed in the villages. “I” is getting common compared to what used to be “We”. Red Maasai Sheep were many, they could be seen in the fields grazing, but it is now very rare to spot these animals among the flocks in the fields. 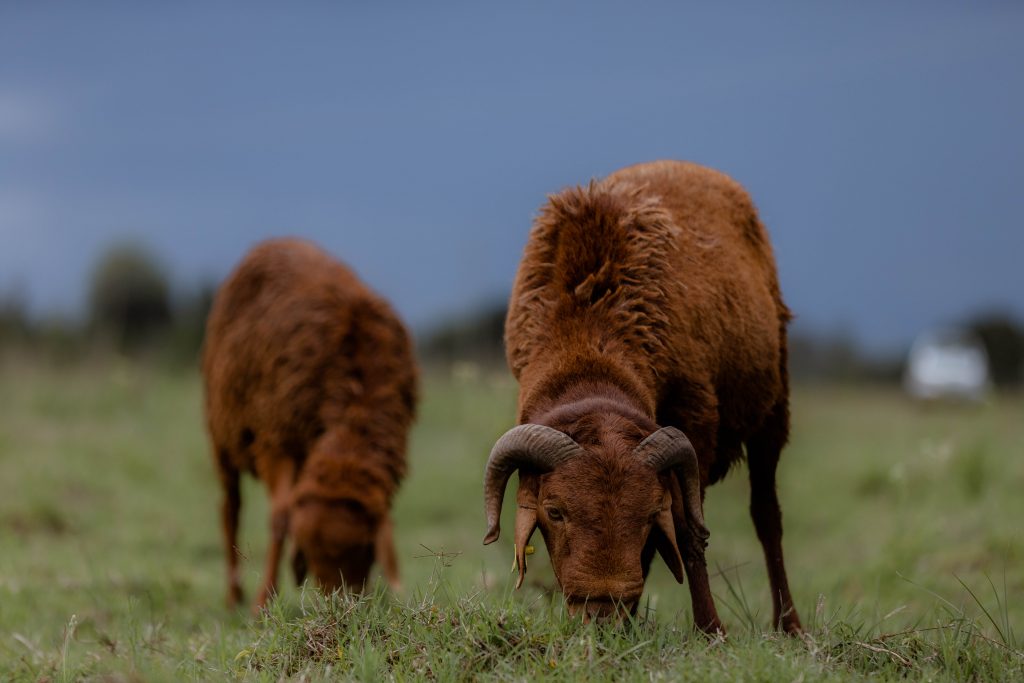 Land was plenty and communally owned, pastures were readily available. Animals could even roam alone and come back home to their sleeping places in the evening. Today, the land has been broken down into small pieces and some government projects being implemented in different parts of the Maasai land are diminishing the pastureland for the pastoralists. Culture used to be more heartfelt and way stronger, there was a much wider range of cultural activities compared to what happens now. The sustainability of culture was there through intergenerational knowledge/culture transfer, but today this has declined too due to Christianity, migration of youth to cities and urbanization among other factors.

A funny anecdote during a project activity?

A funny story or rather a thing that stood out and seemed awkward and funny so to say, is the fact that the Slow Food-IFAD project gave Maasai women a platform to talk, exchange and contribute together with men – a thing that never happened when I was growing up. During trainings, meetings and gatherings, seeing a Maasai woman standing in front of old and middle-aged men to say something was both awkward and funny. This is a good thing for women. If you empower a woman, by giving her the chance to contribute, you will empower a nation.

What is the most important change or changes for the community that this project has brought along?

The Maasai community has experienced a number of changes over time, one being the communal aspects. The community used to own, work, celebrate most of the things they did in their lives communally and this helped them speak with one voice. Today, the communal aspect has gradually declined for individualism has crawled in the community due to formal education, modernization and Christianity among others. Secondly, although Red Maasai sheep became rarer and the community almost forgot about them – the youth could not talk about this sheep, in fact -, the community has seen the comeback of Red Maasai sheep today- a good and positive change in the eyes of many. Thirdly, the community has seen economic empowerment especially with the involvement of youth and women. This transition was achieved through trainings, exchanges and gracing events and workshops prepared and organized by Slow Food Kenya and most importantly by acquiring Red Maasai sheep flocks. With time, empowerment will be even more conspicuous. More people within the project areas are interested to join to have a positive impact on progress together. Last but not least, the project managed to provide a a sense of ownership and belonging. The project members were very happy and gave positive comments, willing to keep working together for a better tomorrow. Together as one as before. 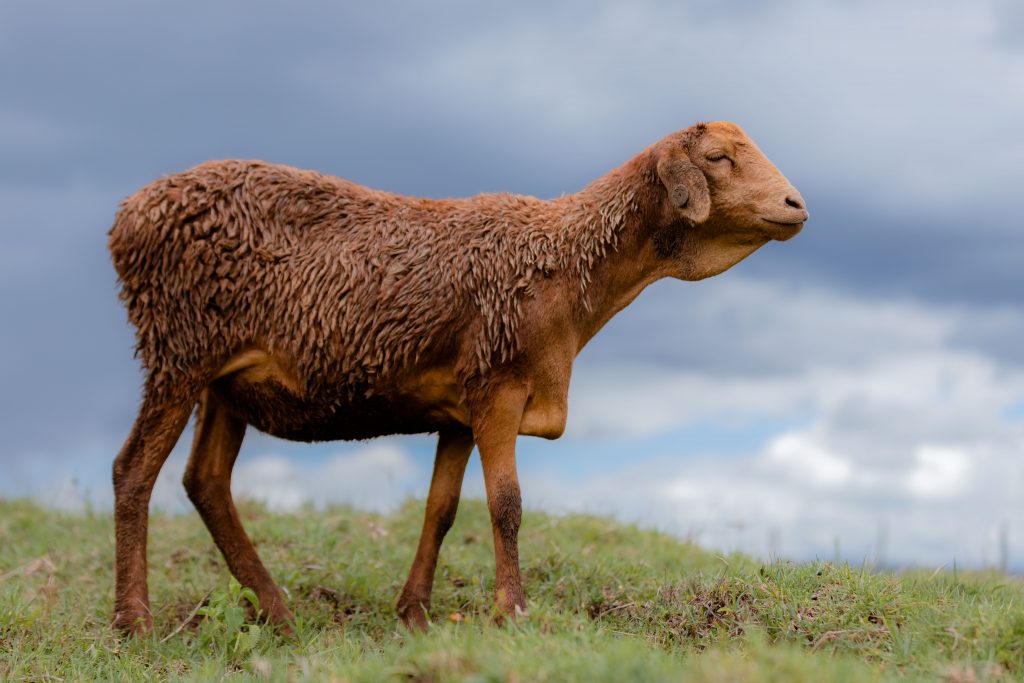 What is the activity that most represented this process?

There are a number of activities that represented this process. First and foremost, the acquiring of the Red Maasai sheep flock was paramount. Presidium members were so happy to receive the reward. After a long series of trainings and promises, some seemed to despair along the process, but boom! Here was the long-awaited crop of the flock. The exchange visit to the chairman of Red Maasai Sheep Association in Lolgorian (bordering Tanzania) was breathtaking. The producers were really moved and felt ready to work together to see the success of the project. Lastly, gracing the ‘ITM-SFYN Shaping the Future of Food System in Africa’ event is yet another activity that well represented this process, they felt humbled to showcase the traditional sheep slaughtering process as well as learning and exchanging with other indigenous communities affiliated to Indigenous Terra Madre (ITM) network.

How do you think the communities will continue from now on?

The communities are likely to continue well with the project even if the project timeframe comes to an end. This is because Slow Food Kenya, through IFAD support, has helped form strong groups with leadership capacities, that are now capable of going on with the activities as they were instructed. The groups will continue breeding the flocks, and fundraise where possible, to increase the flock numbers. These people will keep working together as one and more interested people will be recruited to enlarge the Red Maasai Sheep Presidium.

Has Covid-19 impacted the activities of this Project, and how have you organized to respond to it?

Covid-19 has had positive and negative impacts on the Maasai community. Positively in the sense that youth would move with animals far away from home, but now spend more time at home with the elderly: this gave room for intergenerational knowledge transfer. Farming producers enjoyed favorable conditions for producing food crops as a result of movement restrictions by the government. In fact, some of them harvested their food in October. They feel there was a slight increase in number of animals due to the lower percentage of weak animals dying, without long movements and hence, these animals could be closely attended to, instead of perishing while searching for pastures and water away from home. These circumstances allowed for higher levels of procreation. However, the community was also negatively and heavily affected. 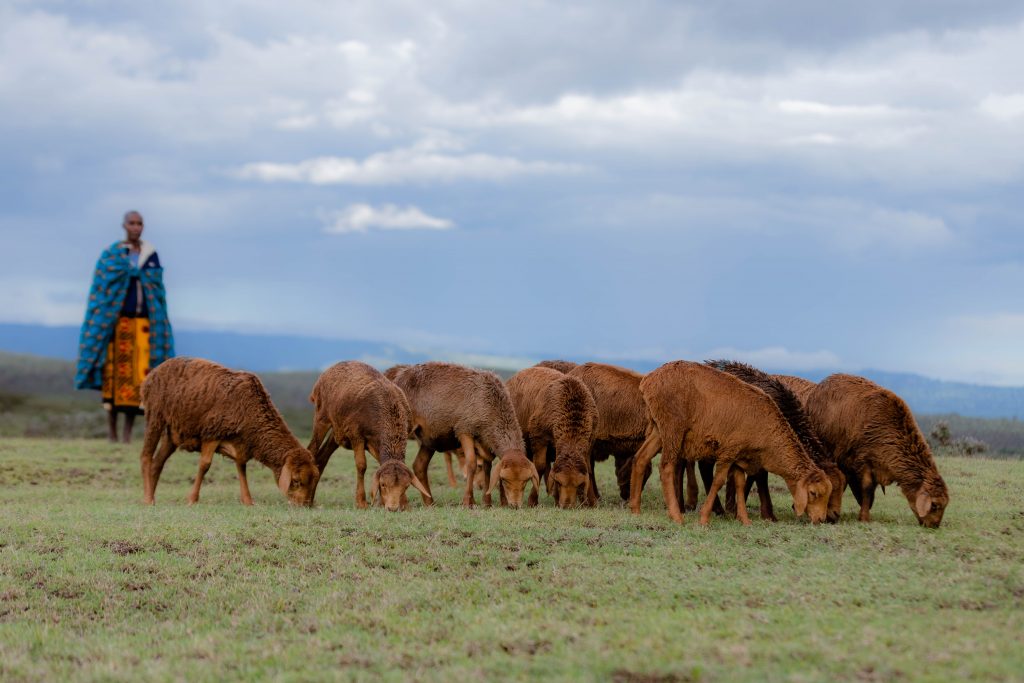 With the restrictions, the animals could not go beyond a certain distance and this resulted in inadequate pastures availability and producers were forced to seek alternative means to supplement the animals, and this turned out to be a very tough task. Important animal markets, such as Suswa city, were closed, with no income for the Maasai and, consequently, no purchasing power to buy for food for families, as that’s what most Maasai families rely on. During this time, many families could only afford the milk they got from their animals and consume it fermented during the day and for dinner. Others turned to farming as an alternative venture. Overall, he Covid-19 pandemic situation created difficulties for some of us: Slow Food supported us with food in time of need. We won’t forget that.

How do you feel within the Slow Food network? What would you like us to do together in the future?

I feel empowered, I feel I have a mandate to revive my community back to the life we used to have . Slow Food instilled in me a sense of belonging and when we thought we were alone, Slow Food came to us and showed that it cared about our Maasai way of life by offering trainings, restocking of Red Maasai sheep and reminding the Maasai community about their roots.

How do you imagine your community in 10 years?

In 10 years to come, I foresee a further development of the community both socially and economically with big flocks of Red Maasai sheep breed with a lot more to share about our successes. I also see more and more Maasai people growing an interest in joining the Presidium and associations like the Red Maasai Sheep Association having more the members to stand up stronger. And finally, I see a great Red Maasai Sheep brand in the making.

Animals at the center of the 13th edition of CHEESE in Bra from September 17-20, 2021 “If there were no animals, there’d be no cheese, nor much of anything else. That’s why we’re putting animals center stage of our program: to raise public awareness of the urgent need to adjust our relationship with nature and …

Welcome to our summer list ! We have picked out the videos, podcasts and books that will inform and entertain you about food politics and the deep interconnections food has with our health and that of the planet. We hope they will help feed your reflection about the world you want to live in. Whether …

From the EU to the UN, Biodiversity Needs Agroecology

Whilst Slow Food launches its global online campaign to promote the protection and restoration of biodiversity, the European Union continues to be incoherent in its approach to biodiversity and food policies. Ahead of the United Nations’ biodiversity summit, environmental discussions must acknowledge the central role that food and agriculture play in the fight against climate …

In a historic moment for Latin America, an indigenous Mapuche scholar will lead the construction of a new Chile

In pursuit of greater equality of rights and social welfare, Chile will draft a new Constitution in response to the crisis that sparked a wave of protests in October 2019 On Sunday July 4, the university professor, linguist and Mapuche activist Elisa Loncón was elected President of a new Chilean constitutional body. This Constitutional Convention …

The Slow Wine Coalition is born

What is the Slow Wine Coalition? A global network that unites all those active in the wine industry in order to bring about a revolution in wine driven by environmental sustainability, protection of the landscape and rural social and cultural growth. The foundations for the formation of this community were laid in Bologna on October …