“Animal cages are a symbol of how industrial farming has been moving in the wrong direction for the past 50 years,” said Rupert Ebner from Slow Food Deutschland who opened a thematic forum “The End of Cages” at Terra Madre Salone del Gusto.

Civil society organizations have approached the opportunity to discuss the importance of farm animal welfare just before the launch of the new European Citizens’ Initiative (ECI), which calls upon the European Commission to propose legislation to ban the use of cages in animal farming. Slow Food believes animals pay a harsh price in the current system and supports the initiative, which was launched on September 24 by Compassion in World Farming. 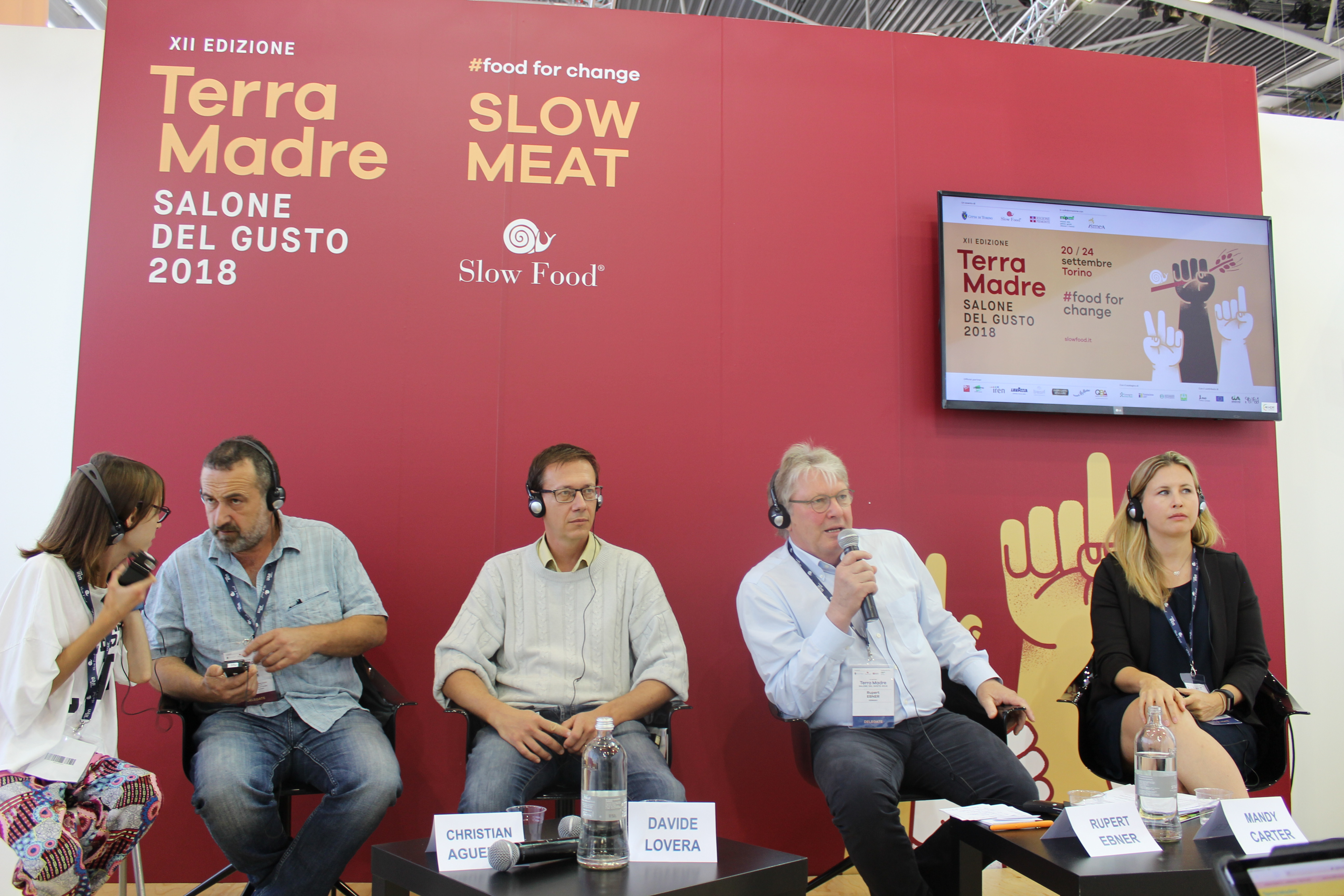 In 2007, the Treaty of Lisbon stated that the European Union member states must give full consideration to animal welfare in decision making. To this day however, around 700 million farm animals in EU countries are kept in cages for all or much of their lives. The only exceptions are Luxembourg, which does not cage egg-laying hens, and Sweden, where no sows are caged.

Cages impede natural behavior and some even prevent animals from turning around. For instance, European law provides for a minimum area of 750 cm2 per hen, little more than a sheet of A4 paper. These conditions make animals more prone to diseases. To avoid that animals are injected with vaccines and antibiotics, posing a risk to those who consume their meat.

“It is not just activists and scientists that oppose cages, 94 percent of people in Europe believe that protecting farm animals is important, while 82 percent believe they should be better protected,” said Mandy Carter from Compassion in World Farming, adding that public support has been one of the reasons to launch the ECI.

A Strong Position on Animal Welfare

Slow Food agrees that animal cages is a severe issue and believes that it is vital to ensure that animals would have a possibility to express their natural behaviors. That includes not only scratching or wing-flapping but also grazing in open space as long as possible and providing conditions to newborns to live with their mothers until the weaning.

With projects such as the Presidia, which only involves small-scale producers, Slow Food makes sure that farmers would follow these fundamental principles and be sensitive to issues such as the importance of animal welfare. The guidelines of the Presidia include the ban on cages for any animals.

Most eggs and meat, however, are produced in intensive farms, where a large number of animals are still kept in constriction, and often, pain. It is, therefore, crucial for the law to intervene and at least to end the most coercive practices.

The cage-free movement is gaining momentum in Europe and the advantage of this opportunity should be taken. The ECI calls the Commission to propose legislation to prohibit the use of cages for farmed rabbits, pullets, broiler breeders, quail, ducks and geese and enriched cages for laying hens. It also asks to farrow crates for sows, sow stalls and enclose calf pens, where not already prohibited.

The ECI needs to gather 1 million validated signatures from at least 7 EU member states within a 12-month period for the Commission to consider the legislative proposal.

Community: Living salt and yeast of the Slow Food Movement

“The term community belongs to our history, as the concept of the communities as local groups connected to the network has existed since the first edition of Terra Madre. We reiterated this message in 2017 at the Congress of Chengdu, where we talked about Slow Food Communities and called for their creation and development across the world. But we need this message to be even more pervasive, an ever-stronger catalyst for the transformation our movement needs in order to carry out its mission.”

As the European Commission is expected to launch the EU 2030 Biodiversity Strategy this March, Slow Food Europe urges the Commission to take the necessary measures to drastically reduce the use of pesticides and industrial farming to ensure the protection of pollinators. In its recent feedback on the new strategy, Slow Food Europe also draws attention to agricultural land, which should become “part of the solution to address the biodiversity crisis” and demands that the EU provides support to farmers to transition toward agroecology.

The first session of the Slow Food Academy on Agroecology, “Agriculture of the Future”, welcomed 40 participants from four different East and Central African countries (Uganda, Kenya, Tanzania and Democratic Republic of Congo) over the first weekend of February in Uganda and Kenya. This four-month course aims to train young producers and farmers on sustainable …

In January, Slow Food Netherlands had the honor of drawing attention to producers of regional Dutch products at the Grüne Woche (International Green Week) in Berlin. With the title, ‘Taste the Dutch Masters’, emphasis was put on the role that regional products play in connecting farmers and consumers.