The crisis triggered by COVID-19 has led to the reinforcement of traditional and hegemonic powers and ways of doing things, but a diversity of spontaneous processes of self-organization, mutual support, and articulation between social movements and citizens have also emerged to respond to a critical socio-economic reality. In the case of agroecological movements, one of these responses has been the #SOSCampesinado campaign, from which we share reflections and lessons learned thanks to the words of Patricia Dopazo Gallego, journalist of Soberania Alimentaria.

Spain was one of the countries hardest hit by the Covid-19 crisis. Its lockdown began on 14 March 2020 and was one of the most stringent in Europe. In this framework, the pandemic has highlighted the urgency of reclaiming the importance of those activities that have become more essential than ever, despite their usual invisibility in a market-centered society.

The production, distribution, and marketing of food was soon declared an essential activity, but which one responds to which model?

While in Spain the entire Horeca channel (hotels, restaurants, and caterings) and direct sales spaces (consumer groups, producers’ markets, milk vending machines, etc.) were being closed down, and when small-scale production was looking for ways to survive, the visible face of the sector was a minister saying that there was no supply problem because the large distribution chains were still operating. What alternatives were offered to guarantee the functioning of short marketing circuits and the survival of small-scale production? None. This is the paradoxical and dichotomous reality of discourse and measures that consider large-scale distribution – which plunders the peasantry – as the only means of access to food.

Faced with this panorama, many of us rebel from the need to defend what is really essential: the activities that guarantee the sustenance of lives beyond business.

So, we decided to denounce the situation for them and create conscience in the political sphere and also among the citizens. The campaign forced politicians in some regions to look for solutions and some weeks after it the street markets were opened again in some regions like Barcelona and Euskadi. 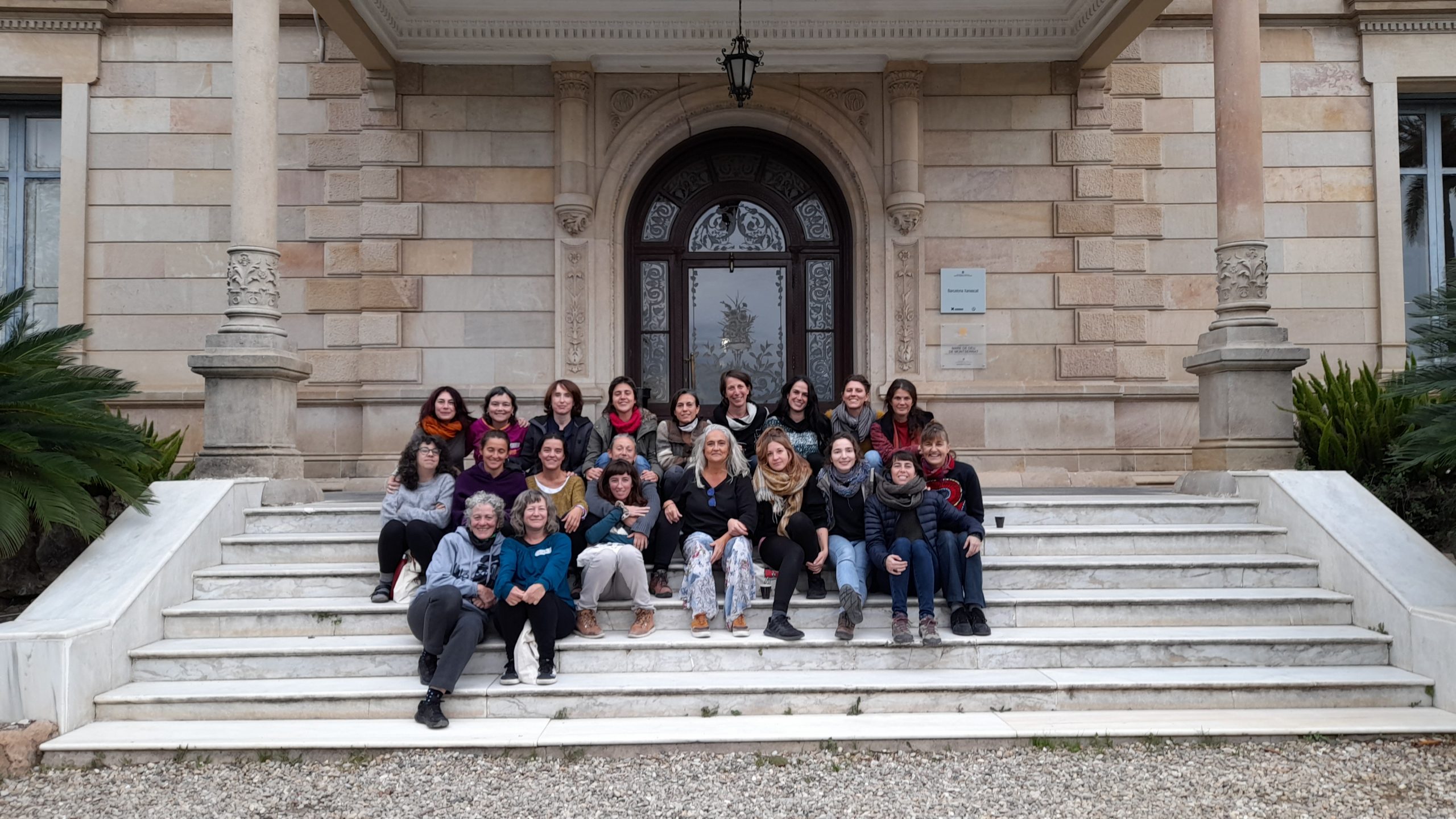 A spontaneous action from an informal space

The #SOScampesinado initiative stems from an informal network of around 40 women from different parts of Spain who have been united for several years by the need to address agroecology and food sovereignty from a feminist perspective. Amongst us there are livestock farmers, shepherdesses, communicators, trade unionists, agroecological activists, researchers, and environmental activists, when the confinement arrived, we shared how we were and how we supported ourselves, and a sense of urgency was activated in the group.

From the firm conviction that agroecology is essential to guarantee the right to adequate food and nutrition, we felt that the decisions of public institutions were not oriented towards guaranteeing these rights. We firmly believe that in these situations, processes of collective organization, resistance, mutual support, and vindication are central.

Based on an agile exchange of experiences and strategies (through emails, calls, and messages), we decided to organize ourselves and start a state-wide mobilization fed by the various territorial initiatives with which we were connected. Our demands were made public on 30 March in a letter to the Ministry of Agriculture signed by more than 100 organizations. In it, we asked, among other things, for the reopening of local markets and the lifting of the ban on the use of self-consumption market gardens, as well as economic and fiscal measures to mitigate the enormous economic impact that this crisis is having on rural economies. We also stressed the need for inter-administrative coordination (inter-ministerial, inter-regional and local) to avoid disturbances, dispersion, and inefficiencies in the adoption of measures. In short, we were asking public administrations to support and recognize the essential importance of local production and self-sufficiency areas as food suppliers for our communities.

In just a few days, thanks to the press and virtual, interpersonal, and inter-organizational social networks, the letter was signed by 600 more organizations, and, most importantly, it succeeded in raising awareness of the reality of small-scale agri-food production and processing and its short marketing circuits. Moreover, this action had its replicas and alliances with other campaigns in the territories, reflecting the potential and synergies of the struggles for peasant and social rights.

Another related action that was viral in digital social networks and supported by our campaign was #Yocomodelahuerta (something like “I eat from my vegetable garden”), created by people who have a vegetable garden for their own self-sufficiency and were affected by the restrictions because it was not permitted to go out to care for this type of gardens. 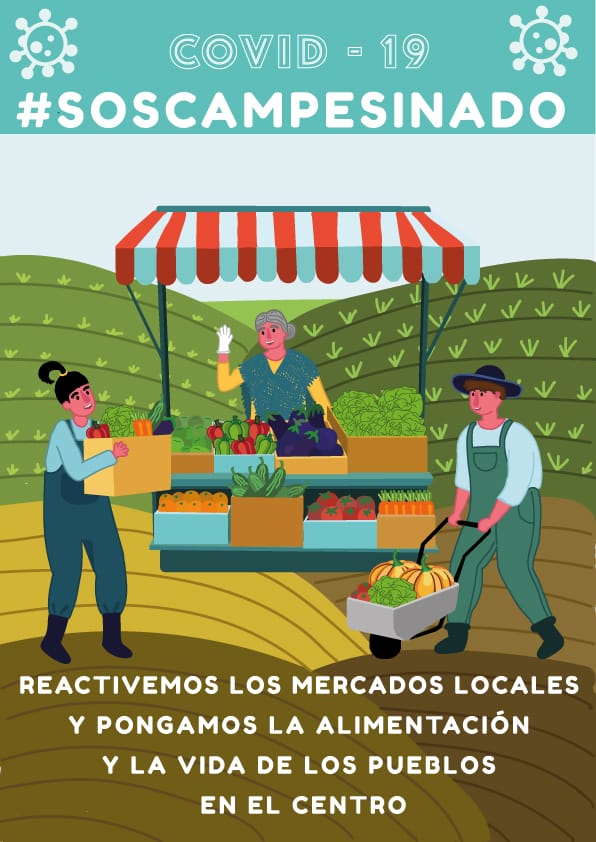 A format to use for free

All the action, in a second moment, was adapted and replicated on a local or regional scale, led by different people (not only women). It was something like a creative commons action and we are glad that anyone can transform and use it for free.  Anyway, it was able to motivate indirectly the spreading of much more initiatives in a smaller scale (cities, regions), and some of them did included direct action with the producers, like this one in Catalonia: a directory map about every agroecological small producer, which was a wonderful idea to promote them and increase direct contact with consumers. https://einatecagroecologica.pamapam.org/directori-dabastiment-agroecologic/

One learning that we consider central to this campaign lies in the process itself. With the urgency of this action very much in mind, we have been able to adapt it to our availability, and not the other way around. We have seen this in the distribution and relaying of tasks and in the different rhythms that the campaign has had in its two months of duration because there have been moments of enthusiasm and motivation; but, of course, also moments of tiredness and doubts. We have incorporated different languages, balanced views, and blurred leadership, sharing resources, experiences, and relationships in the collective construction. The adherence to the charter was based on solidarity awareness and respect for territorial, cultural, and identity differences. For all these reasons, we believe that it has been a radically feminist process: horizontal, diverse, and in dialogue, which recognizes the debates, theoretical work, and political practice that has been built up over many decades by the hand of peasant women and feminist and agroecological collectives.

In fact, those of us who make up this network has been fighting for agroecology in our territories for years, and after this experience, we have once again realized that it is the work of the territories that nourishes the content of initiatives and state mobilization when it becomes necessary and urgent. Our articulation, based on trust and mutual support, has been a meeting place where local mobilizations can be shared and strengthened without the need for a formal structure or a classic organizational model. Thus, faced with the eternal question of whether we need more complex or formal organizational structures, our experience has clearly shown that if the territories are well connected with alliances and cooperation between them, there is no need for a structured state organization with dynamics that often end up being ineffective and wearing.

The struggle is in the streets

Another learning that should be highlighted is the enormous boost and visibility that virtual social networks can give to material struggles in the territories. We are not experts in these tools; in fact, we have needed the help of communication managers from organizations, collective technicians in charge of digital media, and creators of visual resources such as infographics.

Virtual social networks cannot and should not replace our struggles, but they are a fundamental complement to mobilizations in neighborhoods and villages, where we can see and touch each other, and embrace the struggle and hope. However, in this hyper-technological society and in the particular context we are living in, with our limited mobility, they constitute an indisputable space for generating and defending discourse, disseminating practices, and articulating social pressure.

If we had to venture an evaluation of this whole process, we would say today that it has not had all the positive results that we would have liked. At the institutional level, we managed to meet with the Ministry of Consumer Affairs, which listened to our messages and undertook to pass them on to other ministries, albeit with very limited results. Producers’ markets were opened in some regions, and also self-consumption gardens, but there was no widespread change at the state level until the de-escalation phase officially began. Many remain closed and need neighborhood pressure to force their reestablishment and compliance with safety regulations. We know that our message and our demands reached the institutions, but we have also seen that most of them have prioritized other interests.

This campaign has managed to make visible and bring together in a collective message many agroecological experiences that until then had not found spaces where they could feel identified, recognized, or accompanied in their demands. We believe that having built the campaign collectively, horizontally, with mutual care, without logos or letterheads, for everyone in the plural and from no one, in particular, has facilitated this appropriation.

In short, beyond this moment of crisis, we are now on the way, having incorporated a lot of awareness and, above all, feminist practice for the advancement of agroecology through an unprecedented campaign that strengthens our conviction that agroecology will be feminist, or it will not be.

Portions of the story are taken from the article published here