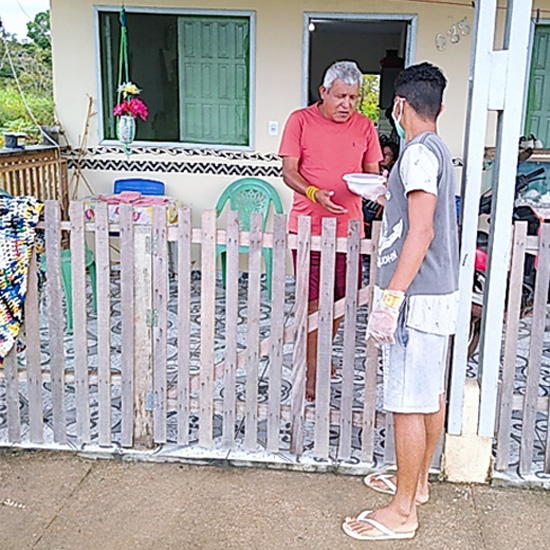 As COVID-19 swept around the globe, it reached remote areas where indigenous peoples have peacefully coexisted with nature for centuries. It amplified the problems created by climate change and inequality, and as they have done for centuries, indigenous peoples continued fighting to keep existing. Showing once more their resilience, as people. Jose Amaury Machado Camizão tells us how his indigenous Slow Food Community in Brazil redirected its agricultural efforts to support the community living in distress.

My name is Amaury Juruna, I am 34 years old and I live at the Indigenous Land km 30, but I’m from the municipality of Vitoria do Xingu. The state of Pará. I have been an activist since I was very young, and I already had the pleasure of serving as an Indigenous Advisor in one of the past governments of my State. I belong to the Yudjá people, also known as Juruna. The word “Juruna” means “black mouth” and it’s because of a painting we used to do in the mouth. Yudjá means “the owners of the river”.

The Juruna or Yudjá are indigenous people who live in the states of Mato Grosso and Pará. Once the most important community of the Xingu, they suffered the entire onslaught of the advance of rubber tappers. Today, their lands are facing destruction at the hands of the Belo Monte dam. The approval of new plans regarding the dam project by the Brazilian Congress in 2005 has led to the displacement of many Juruna families and their lands were sinking by the water caused by the dam.

The Covid-19 pandemic has worsened this situation. 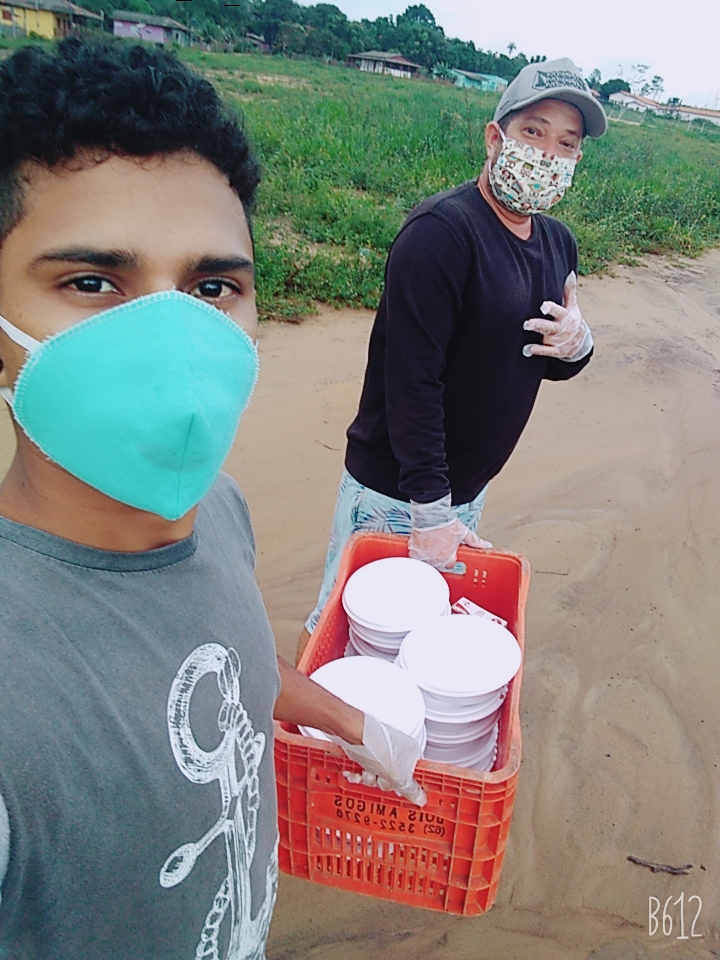 In Brazil, the healthcare system is public, but it didn’t support the indigenous communities. When the pandemic arrived, it was kind of scary and in my village, it has spread too fast because here there is no social isolation: the indigenous people from the act of eating to planting, harvesting… everything we do is in a collective way. At that moment, we knew that everything we had invested heavily in our agriculture to be passed on to the municipality through the PNAE (National School Meals Program) was suspended due to the closures of the schools. So, we decided together with Slow Food, Slow Food Youth Network Brazil in particular with whom we have been collaborating since 2018, to create a donation network so that we could collect this food, divide it into baskets and deliver it to the families here in the city, because we also realized that when unemployment came, nobody could leave, nobody could work… Industries took a lot of advantage from this, mainly the processed food and the ultra-processed food industry. We saw that when a basic food basket arrived, it came with a lot of industrial products. Nothing healthy came along.

I planned it with Murillo and Marineide, SF Community Valorização da Mandioca do Povo Juruna km 30 members. We launched a campaign for people at risk from COVID-19: we collected donations of the agricultural production to make 100 baskets containing:  macaxeira, pumpkin, green Corn, lemon, orange, sweet potato, cassava derivatives (tapioca flour, tapioca gum, and tucupi). With the funding, we also created a sanitary barrier: at the entrance to the village, anyone entering or leaving had to go through a process of sanitization. And, during the pandemic, we delivered food every fortnight, but we realized that it was no longer possible because people could no longer leave the village, as the number of infections was already over 70% in the village. So, we decided to take the food, transform it into preparations and thus guarantee a daily meal for each family. Juruna organized meals for the residents of the region and distributed 50 meals, each for 3 people.

There was a team that cooked and a team that delivered the food properly protected against the virus. 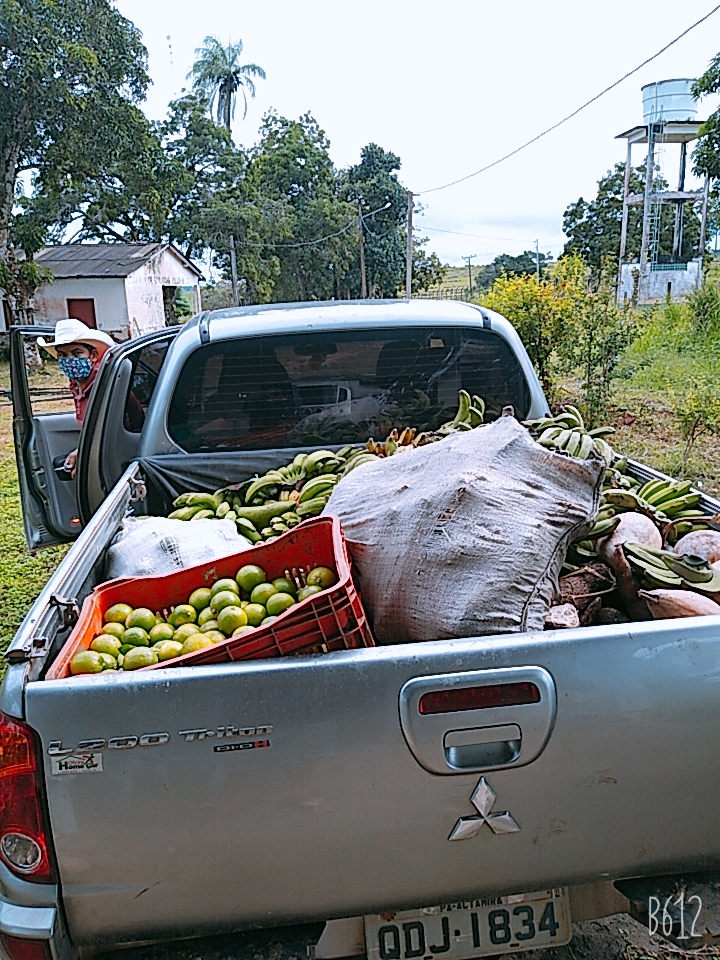 The first team of 8 people was the one that would work in the collection. And then we put together another team, to pack the food to be delivered, and another one to prepare the cassava derivatives because we have a flour factory and there we took a lot of cassava to process.

It was really exciting. In the first delivery, we were able to reach a total of 35 families, a total of 100 people. The first basic basket consisted of cassava flour, tapioca gum, flour, tucupi, pumpkin, macaxeira. We had an investment of 570 reais.

In the second phase of the basic food basket, we already had a slightly larger investment, totaling 750 reais, most of which was spent on car transport and packaging, but a total of 90 food baskets were made, consisting of Long Banana, Banana Sapa, Banana Apple, Pumpkin, Macaxeira, Lemon, Mandarin, Sweet Pepper, Brazil Nut, Lemon, Orange, Tucupi. A total of 50 families were covered in the village. In the city of Altamira, 40 baskets were delivered to the indigenous Cidadina population, for a total of almost 200 people.

The experience, for me, was very gratifying, because when you knocked on the door of the indigenous people with a wheelbarrow with culturally appropriate food, already prepared, and you offered it, you saw the gratitude and you saw that if you didn’t have that food, it would be impossible for that person to leave home because his body was weakened and he had no strength.

And today I keep wondering if we hadn’t delivered the food, what would have happened to these people?

The collaboration was fundamental: we involved more than 30 people, from SFYN Brazil and the Community, and other local volunteers.

I don’t even think it was exactly the learning, but the feeling was of being in a fight amidst the chaos, amidst uncertainty, amidst the neglect here in our country, amidst the disbelief of governments against this virus. You could see the person who lives next door to you collapsed, in a weakened situation, and you knock on that door, putting your health at risk for the sake of the other… When you delivered a soup or hygiene material, receiving a simple thank you, you had already great satisfaction.

So, finally, you also relieve that person who is at home, with his wife, with his children and the uncertainty of having something to eat and us there playing this role of bringing what was clean and fair, which was what we produced with much love, with much affection for these people for us really gratifying as a learning experience.