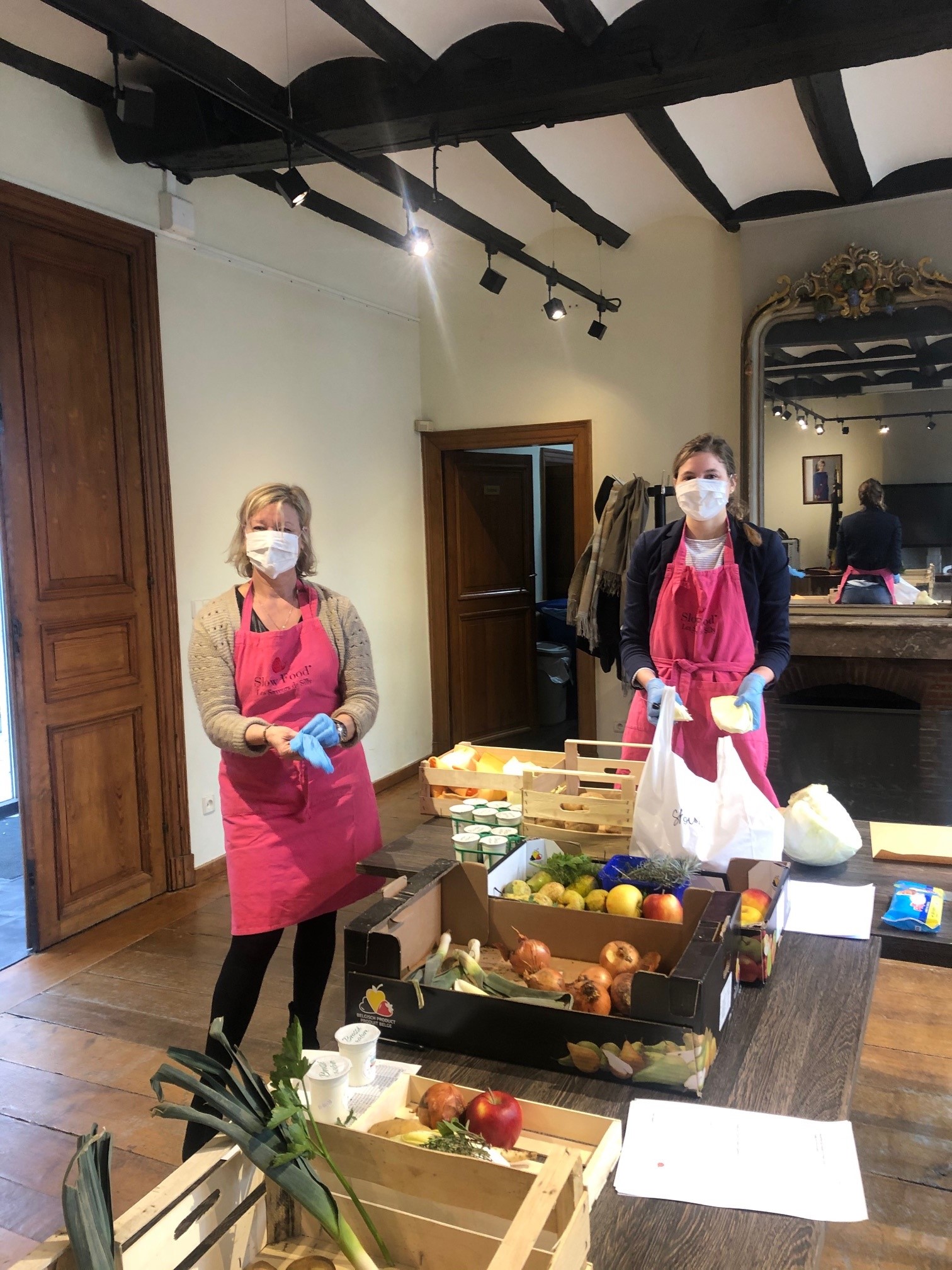 Food can heal the soul, and the “Silly Cooking Project” is a living proof of it! During the first confinement in March 2020, the Slow Food Convivium in Silly (Hainaut, Belgium) decided to prepare and deliver food baskets to elderly people, with regional products from local producers. Sabine Storme, coordinator of the project, tells us more about it and what impact it had on its beneficiaries.

My name is Sabine Storme, I am the coordinator of the Slow Food Silly Convivium “Les Saveurs de Silly” in the Hainaut region in Belgium, and I studied Botany and Environmental Sciences and Management, with a focus on food environments and sustainability. In 2008, as I was finishing my end-of-studies internship in Silly, I had the opportunity to meet its mayor, who told me that the town had just been twinned with San Miniato, in Tuscany, Italy. He was very interested in the development of the Slow Food movement there and asked me if I’d be interested to help him take Silly on the same path to sustainable food and agriculture. Of course, I said yes, and we launched the Slow Food convivium “Les Saveurs de Silly” that same year.

Right now, Slow Food is well established in the region. We regularly take part in local cultural and touristic events, during which we offer and promote slow food, while bringing local producers forward. We even recently acquired a brand-new food truck “La Vie en Slow” where people can come and have a local burger, made with seasonal products, home-made sauce (I make it myself!), local bread and meat.

Last year, during the first confinement, we and Silly’s mayor decided to set up a project to help people over the age of 60 who could not get out of their homes anymore. In Silly, a quarter of the population is elderly: the sector of the population most vulnerable to Covid-19.

So, we started preparing and delivering lunchboxes to the elderly with meat, dairy, fruit and vegetables, together with a recipe, offering a valid alternative to the supermarket. 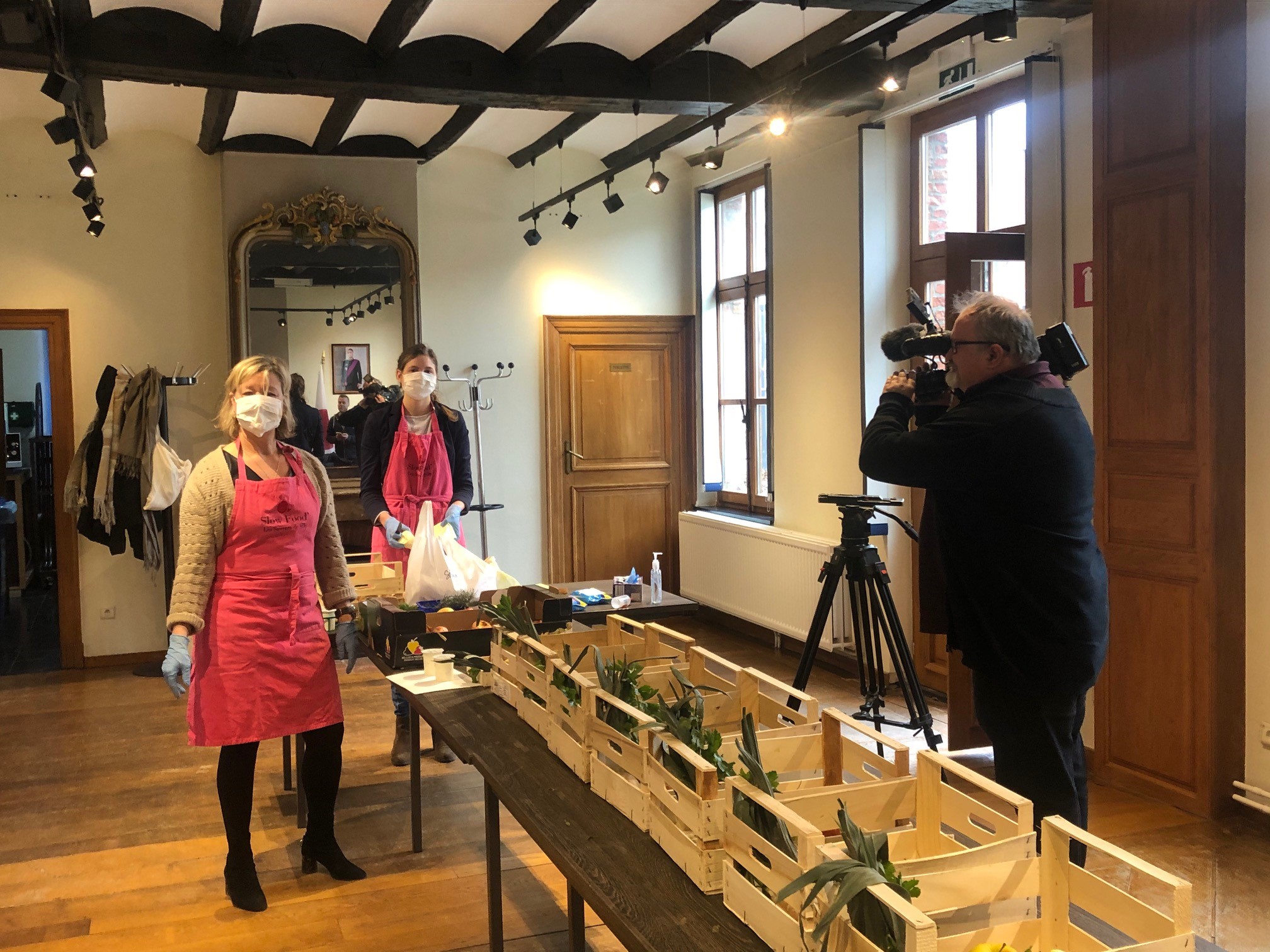 For 10 euros per basket per day, people were provided with everything they needed for a full meal: starter, main dish, desert. We promoted our initiative via mail, emails, the town’s newsletter, and we also sent a press release which gave us more publicity than we had expected! I was invited to speak on the radio, and national TV came to Silly. I think that during that tough confinement, everyone needed to hear of positive story on how to fight the confinement depression.

Overall, it was quite a success! In three months, we distributed 1000 baskets to around 100 people, which was a great accomplishment. Unfortunately, we had to stop because we didn’t have enough time and volunteers to keep it going.

During that period, I realized that many people were still not aware of the region’s local producers and products, so the “Silly Cooking Project” helped us raise awareness about them, as well as about our Slow Food philosophy. People came to us afterwards, saying that they had really appreciated eating local food and that they would keep buying from local producers. The easy recipes that I imagined for them were also a big part of our success. My main priority was making them discover new tastes and combinations, not having them break their heads over a meal. For sure, local producers also benefit a lot from such projects.

Last year, the demand for local products exploded in our region, and I hope this trend will keep growing!

My tips for those who would like to set up a similar project:

And more broadly, I’d say “Just try”! Such initiatives can make a big difference for people who benefit from them. The “Silly Cooking Project” was not implemented on a high scale, but it brought comfort and joy to many elderly people who felt slightly lost and abandoned last year.

Another example: as you may know, parts of Wallonia were seriously hit by flooding last July, so we decided to drive our brand-new food truck to Chaudfontaine (one of the cities most affected) and to cook burgers for both victims and volunteers. In two days, we served 450 burgers to people who had just lost everything (loved ones, house, car) and they all said it was great comfort and relief for them. It is very much worth it!

If you happen to be in Belgium and you are curious to know more about the Silly Slow Food Convivium’s projects and/or volunteering opportunities, check out their webpage.