Since its foundation, Slow Food Youth Berlin works with local producers to help them valorize and promote their activities. During the pandemic, this work that has always been mostly done physically has moved online, without losing the usual passion. Katrin and Adèle from Slow Food Youth Berlin created the very first [email protected] box, trying to help producers to present their products during online tastings. The box was delivered by bike by an initiative with whom they cooperated. They organized this event during the lockdown twice, with different products.

“It was a lot of fun!”. These are the first words Katrin Simonis and Adèle Garret from Slow Food Youth Berlin describe their idea.

It is actually strange to hear this, tied to a time in history when the entire globe was anything but amused. The pandemic raged everywhere and millions of people saw jeopardized not only their lives but also years of work and effort, professionally speaking. This was the case, for example, of small producers who, crushed by bans on markets and the various lockdown rules, risked having a large part of their harvest unsold.

But it is in the nature of young people to have energy, ideas, and purposefulness, to see in every difficulty an opportunity, a way to get up and move forward.

And this is the story of Katrin Simonis and Adèle Garret, who during the first 2020 lockdown were looking for an idea to be more active and help the community to face the emergency. And that’s how they implemented the [email protected] box.

“Since the idea was conceived, we managed to organize the first event in a few weeks, running against time”, they explain. “We were so excited about it that we did our best to make it possible”.

“We thought not only about the producers – Katrin and Adèle tell us – who could no longer sell their products, survive the competition from the big supermarkets that seemed to be the only way to shop during the lockdown, and above all could no longer promote their work and philosophy. We also thought about the consumers, who could no longer really choose how they shopped and were cooped up at home, with plenty of time to also learn and sow the seeds of change in the way they eat once the pandemic was over. It was the right opportunity!” 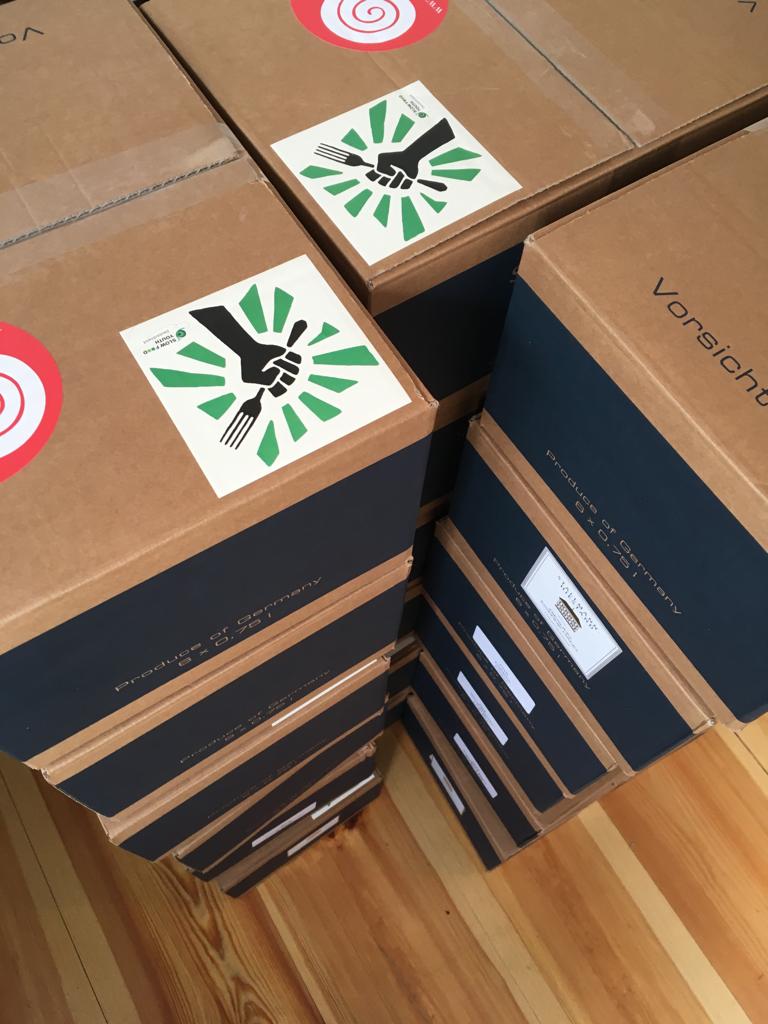 So, while the world stopped, in Germany this group of young activists did all they could to find local producers, collect their products, organize the tastings and deliver for free the boxes to those who decided to participate.

“We wanted to introduce people in Berlin to good, local producers and open up a conversation between producers and consumers so that they were able to get to know the people behind our food better”.

Participants paid for the products, a box with cheese, wine, bread, and chocolate, which were delivered for free by Schokofahrt with their cargo bikes.

“We had 70 participants and were overwhelmed by positive feedback and comments, both from producers, who had the possibility of explaining what they do and from consumers, who discovered new realities around them. In the end, we donated the money to their Slow Food Youth Group in Berlin, in order to help organize new education activities”, concluded. “We are really happy we managed to give a hand and make people get together, even if virtually, to know they’re good, clean, and fair food around them”.

“It’s not hard to create initiatives like ours. All you have to do is network interested consumers and small-scale local producers who grow according to the Slow Food philosophy. The means to organize tastings online are numerous now. The only critical issue is perhaps the delivery of products, which must be sustainable and not rely on systems that favor emissions or pollution. Maybe the suggestion is to keep these initiatives in a limited radius or to rely on volunteers who can help with product deliveries, maybe in one single point of the city. The SFYN network is available to welcome other young people and to organize other similar initiatives together: only together can we change the food system, starting even in our spare time or in the moments when it seems that all is lost”, added the two activists.