Slow Food Climate Action is the new Slow Food Campaign which highlights the issues around Climate Change, and how Slow Food aims to tackle them. On June 26th at noon CET, we’ll be launching with a 24-hour online conference which will include a mixture of film, panel discussions and debates, and will offer space to voices from the global South, women and indigenous people from across the world whose voices are less heard, alongside those of scientists, citizens, farmers, youth and consumers from every corner of the globe. 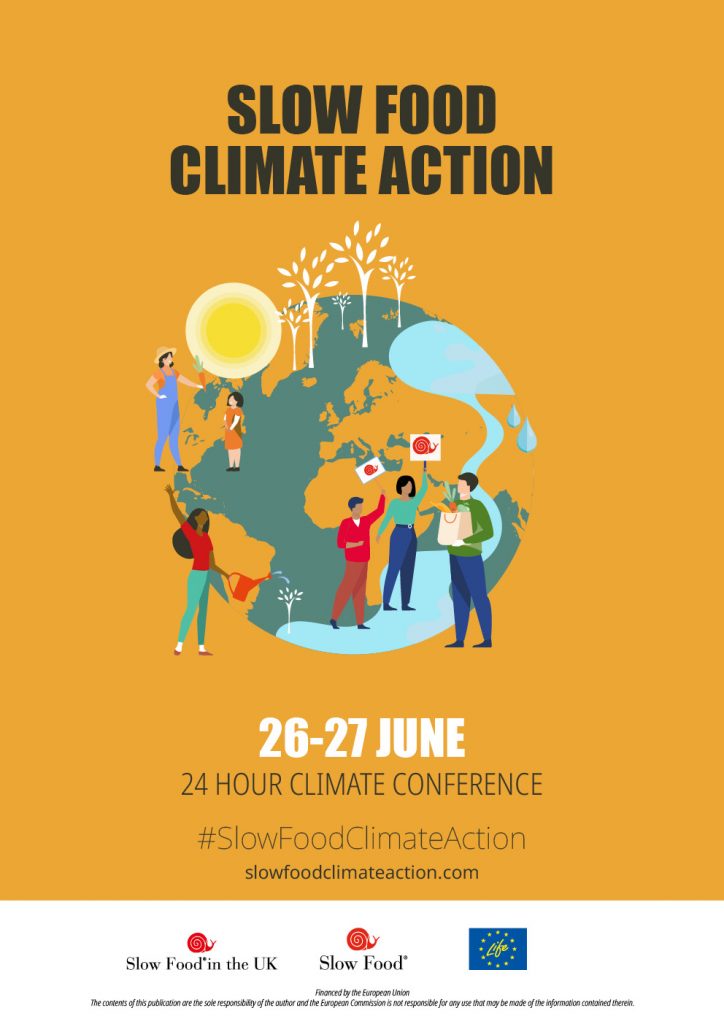 During the conferece, different topics and themes will be tackled, ranging from agroecology to regeneration, as well as consequences and possible solutions to fighting climate change. The event will include a number of diverse contributions and speeches from Europe and all over the world. The event will also be the opportunity to launch the Slow Food Climate Declaration, a set of statements that we ask all citizens to sign and support, and will conclude at noon CET 27th of June, highlighting the positive steps we as Slow Food can take.

Slow Food has been working to seek to address the intersection between the food system and climate change and to describe possible pathways for tackling the climate crisis through the adoption of environmentally-friendly practices along all stages of the food supply chain, following a “seed to landfill” trajectory.

The full programme and box office for the  conference will appear here from  7th June. Book your free tickets to watch and take part in Keynotes, Panel discussions and Films, or watch them live streamed on social media!

Objectives such as protecting biodiversity, fighting climate change, developing local economies and small-scale production and safeguarding local knowledge, traditions and culture should not be interpreted separately.

Instead, each objective must be set and pursued as part of an overall strategy that takes all the other elements into account simultaneously. Slow Food advocates for a food system based on localized, ecological, biodiverse and low-external-input methods of production, harvesting, fishing, pastoralism, processing and distribution.

This project is led by Shane Holland, Executive Chair of Slow Food in the UK, in collaboration with Slow Food International. Slow Food in the UK has been leading on food and climate advocacy issues, both within the UK and also more widely, partnering with other NGOs, and taking an active role in multi-NGO groups such as the Climate Coalition, who are supporting the project.

The Declaration will be available to sign from 26th June until 1st November when it will be presented at a COP26 event in Glasgow. Visit slowfoodclimateaction.com for full details of Slow Food Climate Action, to register for free any events, and from 26th June to sign the Declaration.