Hogan pledged to provide an additional €15 million a year to be spent on the promotion of meat consumption throughout Europe, in order to alleviate the pressure that European livestock farmers are facing due to downward pressure on prices. Over the past few months, Hogan has made other statements attesting to the EU’s focus on supporting the beef industry, while continuing to promote other meat sectors as well.

While at first glance this initiative may sound positive in terms of supporting farmers, the initiative refers predominantly to industrial meat production, which is often cruel to animals and is a major source of carbon emissions. Increasing industrial meat production and consumption are disturbing causes for the EU to support given the current climate surrounding the debate on meat in the 21st century. A study by the Oxford Martin school earlier in the year found that simply by cutting our meat consumption to within accepted health guidelines could reduce food-related greenhouse gas emissions by as much as 29% by 2050. By contrast, if global meat consumption doubles by 2050, as predicted, the world will be consuming 500 million tons of meat a year, and the system will undoubtedly collapse.  Furthermore, industrial meat production and consumption have a negative impact on biodiversity and on human health. 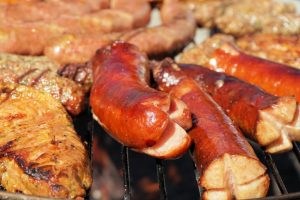 Hogan has also been publicly supportive of international trade agreements with North America (previously TTIP, and now CETA), which would benefit the European meat export market. However, TTIP and other similar third-country free trade agreements pose a significant threat to local food networks and, by extension, to the environment.

Piero Sardo, President of the Slow Food Foundation for Biodiversity, said: “There is something wrong with this model of food production, as recent food crises in wheat and milk prices demonstrate. If there is money available from the EU institutions, we should take the opportunity to support virtuous producers, farmers who respect animal wellbeing, have a lower environmental impact, incentivize the homegrown production of animal feed by those same farmers, or promote educational campaigns for consumers. As the Slow Food community, we need to raise our voices and vote with our forks to eat less meat, of better quality, and ask our government leaders to support initiatives in this direction.”

Slow Food’s key principles include supporting farmers and producers working in a manner that is respectful and fair to the environment and their product (be that plants or animals). The industrial meat production and consumption standards currently in place are unsustainable for the living conditions of farmers and the billions of animals who are bred and slaughtered every year to meet the growing demands of the market.