The Gran Chaco Wild Fruits Presidium was founded in 2014 in collaboration with the Gran Chaco Foundation and the Gran Chaco Artisan Women’s Cooperative (Co.M.Ar.) to support the efforts of women from the Qom, Wichi, Qomle’ec and Pilagá indigenous in preserving and promoting the region’s wild fruits.

In recent years, the Presidium has been mainly working with the white carob tree (Prosopis alba), which bears fruit in the form of oblong pods that are used to make a flour, which is an important ingredient for local communities owing to its gastronomic and nutritional qualities. In the two years the project has been running, two carob flour production centers managed by the women from the nearby communities have been built, which have made it possible to increase the quantity and quality of the flour produced. At the same time, processes have been implemented to consolidate the institutions and leadership of women in the Presidium, both through technical training on product harvesting and processing and through activities and events within the framework of the Indigenous Terra Madre network. 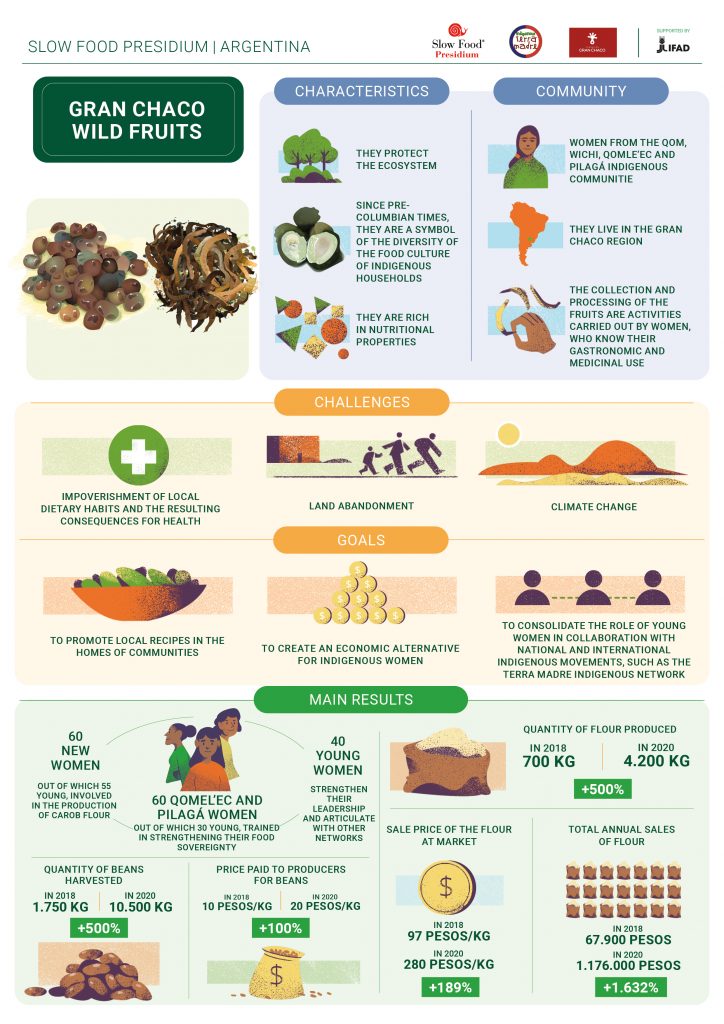 Twenty years ago there were no social plans and parents depended on resources from the bush to feed their family. When the fruit harvesting season began, women, with their children, would go out into the bush to gather and eat the rich fruit, which we like so much. The diet was based on fishing, hunting, collecting wild fruits and honey and on farming. We were happy and strong.

Do you have any funny stories from the project?

One day we went out in a group to explore an area of carob trees that had been flooded to see if the trees were still producing carob beans and to map the area, which is part of our work. We set off intending to harvest and eat beans but we only found dry trees. We were sad and about to head back when we found several trees with delicious honeycomb. We consoled ourselves by eating the honey and confirming that nature always leaves us surprises.

What is the most important change or changes that this project has brought about?

That young people have taken a new interest in the fruits of the bush and value them. The project has created a strategy to promote knowledge and work was started to develop traditional economic activities for marketing. It has promoted the exchange of knowledge among indigenous peoples about the variety of species with nutritional value in the Gran Chaco region, and harvesting, processing and conservation techniques.

Which activity is most representative of this process?

There isn’t just one, but you could say the improvement of the whole process of processing the bean into carob flour in the “Lot 8” production center. Also trips into the bush to map fruits, the exchange workshops and putting together the manual. The trips to other places and cultures have also been important.

How do you think the community will continue from now on?

That depends a lot on each family: in families where parents continue to pass on knowledge to their children, people will be better off and the work that has been done with the projects will bear fruit. In other families where parents forget and decide to become dependent on government financial aid, their way of life will not change much.

Has Covid-19 affected Project activities, and how have they been organized in response?

Yes. We couldn’t leave the house, go into the bush or organize meetings and/or training. We have not been able to travel to meetings. We have started to have meetings via video calls and Facebook. We have been able to organize the carob bean harvest in this way, in fact, and partners such as Inti (National Institute of Industrial Technology) are training us remotely for the new flour production. It has allowed us to become independent from the technicians who came to help in the flour processing plant and now we are doing the whole process on our own.

How do you feel as part of the Slow Food network? What would you like us to do together in the future?

To continue working to attach importance to fruit and on new ways to use it. To include talks on traditional foods in local schools to raise awareness among children and promote sustainable local food systems.
To further develop traditional economic activities, which are the only alternatives to reduce the effects of climate change and to generate job opportunities in the region.

How do you imagine your community in 10 years?

We hope that people will not forget their identity and their relationship with nature. Many things in our daily lives have already improved compared with the time of our grandparents: it’s all a process!
We believe that new opportunities will appear and that young people will become interested again in our production activities.