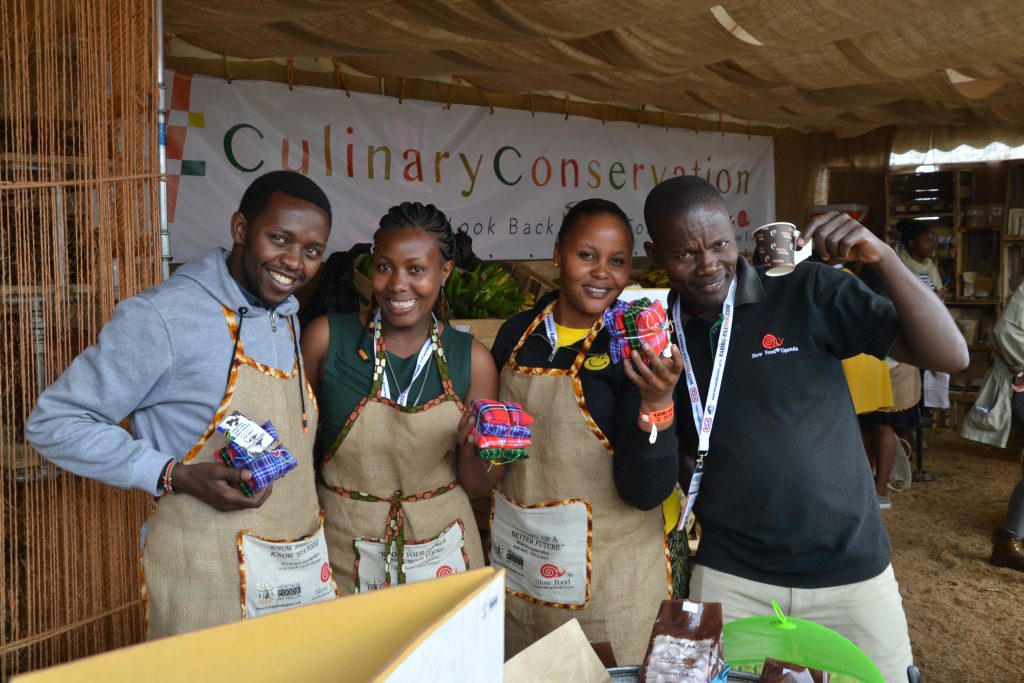 From June 7 to 9, Slow Food’s East African networks (Slow Food Tanzania, Uganda and Kenya) in partnership with Heritage Foods Africa participated in the 2019 Karibu-Kilifair in Arusha, Tanzania. Kilifair is an annual international outdoor tourism and industry fair that brings together tour operators and companies from around the Kilimanjaro region and across Tanzania and East Africa in general.

The partnership between Slow Food and Heritage Foods Africa represented a beautiful marriage of traditional food produced in a good, clean and fair way, and their stand won first prize in the “Best Decorated & Most Impressively Built Stand” category out of 445 exhibitors. A panel discussion on the importance of food production trends in relation to climate change and the urgency of changing mindsets when thinking about the future of our agriculture and food was of particular interest.

“Heritage Foods Africa team members set up the stand in a creative way, sourcing traditional, natural and recycled materials. Slow Food Kenya, Uganda and Tanzania filled the chairs and spiced up the shelves with dried, powdered, floured, brined, fermented, buttered, roasted, baked, raw, fresh and processed foods. It was definitely a team effort between the Heritage Foods Africa team and Slow Food.” said Marlies Alpers-Gabriel, the founder of Heritage Foods Africa. Rose Swai from Slow Food Tanzania continued: “The highlight was our daily lunches from chefs from the Slow Food Cooks’ Alliance in Uganda, Kenya and Tanzania. These delicious, clean and fair meals added flavor to the stand, while the people brought the atmosphere. Our stand truly represented and echoed the idea of Kilifair as an East African show. We attracted a lot of positive attention and definitely planted important seeds.” 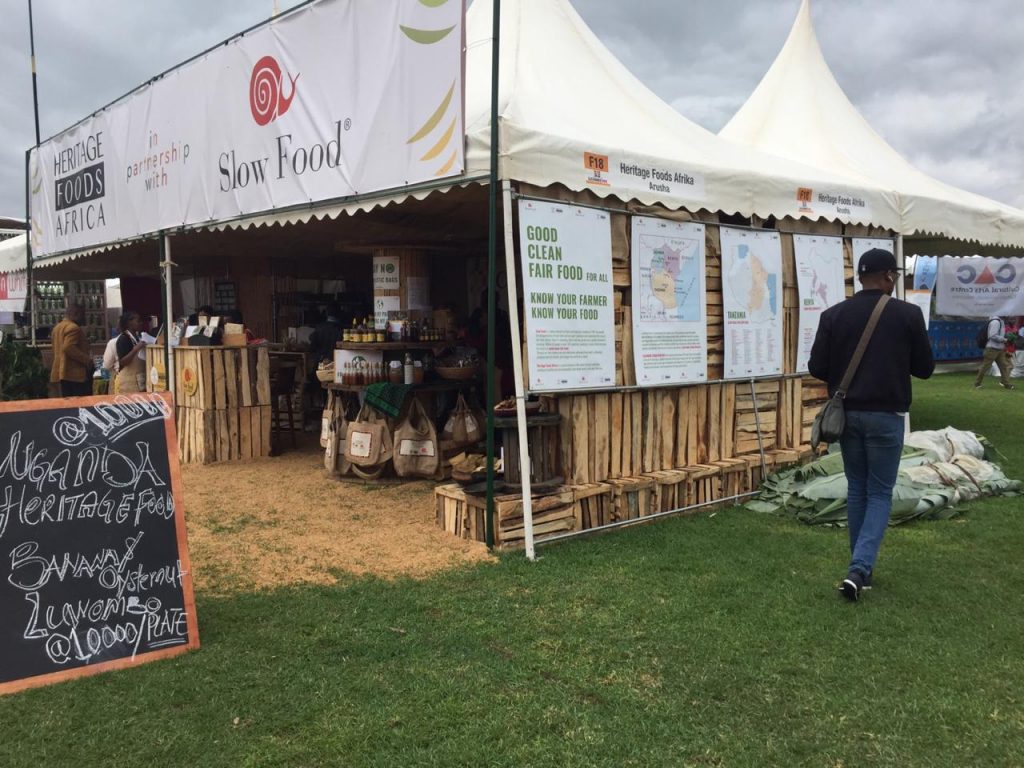 Following the Terra Madre path, the stand showcased Ark of Taste and Slow Food Presidia foods produced by small-scale farmers within the Slow Food network in the three countries. Visitors to the fair could learn about many products, including  Arusha Stingless Bee Honey from the Umangu Women’s group in the village of Ngurdoto, near Arusha in Tanzania; Mau Forest Dried Nettles from Kenya; Luwero Kisansa ground and whole-bean coffee from the Luwero Kisansa Coffee Presidium in Uganda; and millet varieties from the Teso Kyere Finger Millet Presidium, also in Uganda.

At the Earth Market, indigenous fresh produce like Telfairia pedata (Oysternut/Kweme), banana passion fruit, varieties of green banana like the Kitarasa, air yams, sweet potatoes and local spices were showcased.  Each product at the market has a story behind it, and representatives of Slow Food’s East African networks, like Isaac Kabanda, referent of the Ark of Taste project in Uganda, raised awareness by sharing those stories. “I always try to tell people the stories behind every product, in order to allow them to understand the production processes and their value,” he explained.

During the fair, Heritage Foods Africa also raised awareness about its efforts to mitigate conflicts between elephants and local communities in the region through the Sparkling Elephant Project. 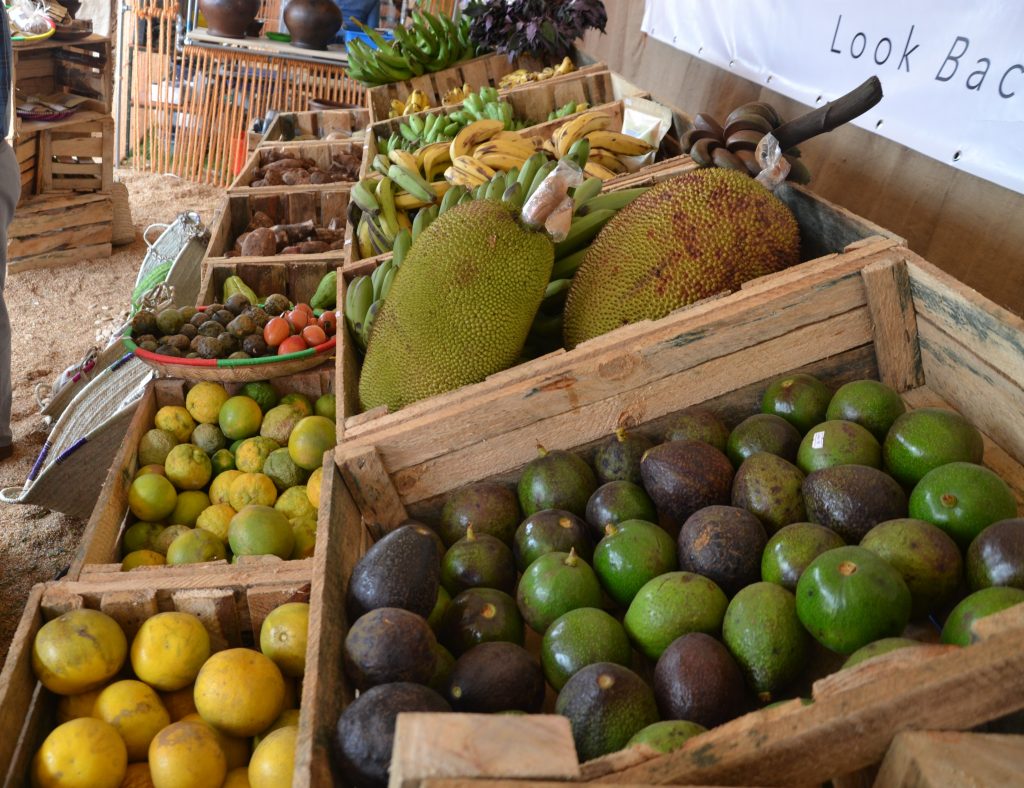 During the fair, Slow Food chefs from different countries prepared their specialties, giving the public a taste of local biodiversity. For example, Slow Food Uganda chef Nassozi Kezia prepared Matooke n’Oluwombo, Ugandan green bananas of the Nakitembe variety, cooked with green peppers, onions, curry powder, Oysternut (Kweme) paste and Luwombo mushrooms, served on green banana leaves laid on traditional earthenware plates. Oysternut, known as kweme in Kiswahili, originates from Tanzania and Mozambique but it is now common in several other East African countries. This liana climbs on trees that support the intricate home farming system of the local Chagga ethnic group. This system is at risk of disappearing due to widespread tree felling and deforestation. Oysternut conservation is the backbone of Heritage Foods Africa, which works to promote this precious nut and the food system in general through the production of specialty products under the motto “Look Back, Cook Forward.” For this reason, a kweme nursery was displayed at the front of the stand, to raise awareness about this disappearing heritage food.

Cooking can be a potent driver for sustainable change by delivering delicious foods founded on both innovation and heritage, and Slow Food and Heritage Foods Africa’s success at the fair definitely reflected this. The real challenge now is maintaining external interest as they work towards a common objective: using gastronomy to change the way we produce and consume in order to create a sustainable, healthy and inclusive food environment.