In the grand scheme of things, Slow Food San Francisco is a relatively new chapter. That said, they have grown fast, moved by their passion for seafood, the environment and the culture around it. As proof of this, they have organized the first edition of Slow Fish in San Francisco. The idea for such an event was born at Slow Food Nations last year in Denver. Since then, this amazing team of volunteers has worked tirelessly to create strong relationships, adding value to fish that goes beyond money, and building participation in discussions for better policies or organized resistance against policies that feed the market rather than people. 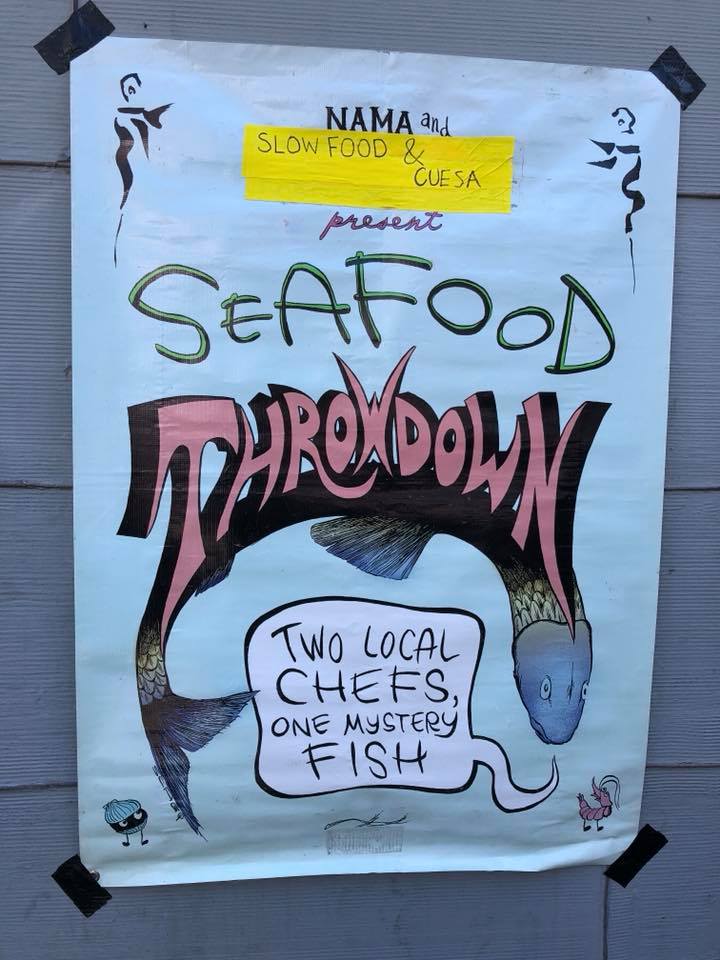 Starting at the Ferry Plaza Farmer’s Market on April 14, and with the help and support of CUESA, the event kicked-off with a seafood throw-down: “Mystery Fish Reveal”. Local chefs Aaronette King (Oakland) and Matthew Dolan (San Francisco) were challenged to cook locally caught (and under-valued) sablefish, also known as black cod. While the chefs got down to business, the event’s MC, Kirk Hardcastle, a Californian fisherman who has relocated to Alaska, presented the current state of USA fishing to a public eager to learn more about good, clean and fair fish. Leading with questions like “Did you know that currently 92% of fish in USA is imported and 60% is exported?” or “Did you know that fish travels 5500 miles from the sea to the table?”, Kirk had little trouble grabbing the audience’s attention. As the challenge progressed, the aromas began to seduce the crowd more and more. Matthew cooked the sablefish in a mushroom cream, while Aaronette prepared sablefish tacos! But smells alone would not decide the champion, that was up to the judges: Tu David Pho, Liam Myclem and Hans Haveman. The three judges are local celebrities, known for promoting the role that consumers have in changing the fish market, by choosing local food and experimenting with new tastes. “We chefs make the trend; but you consumers make the impact!”

After an enthusiastic tasting, and much thought and deliberation, the judges reached a verdict. Drumroll. The winner is… Aaronette King! With her delicious black cod taco! 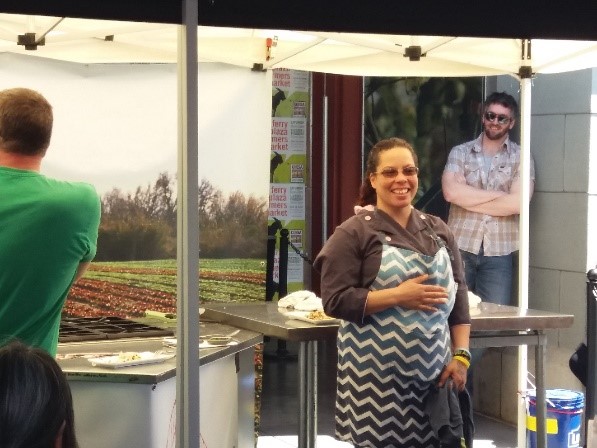 Later that evening, the welcome reception Oyster Party was held at one of the sheds at San Francisco Port, featuring oysters from Alaska, Washington, Oregon, California, San Francisco and Baja. Shuck, shuck, shuck!

On Sunday morning, the crowds meet at SOMArts Center. The day of conferences opens with a few keynote addresses. Among them, Jacqueline Ross from Coast Miwok, a member of the Pomo Tribe, tells the story and traditions of Coast Miwok, before inciting the crowd to stand up “… because now I’m going to recite a poem in my native language, to connect you with the ocean and the universe.”

Next, it was time to listen to stories about the roots of the Slow Fish campaign, where we have been and where we are going, how the values of good, clean, and fair food are gaining traction in communities around the globe, and how our fisherfolk are resisting policies that seek to keep them away of the sea.

The morning session was bookended by a wonderful lunch, centered on local, sustainable fish, to prepare attendees for a World Café session, in which Slow Fish newcomers and veterans alike dove deeper into what the values of good, clean and fair fish really mean. Some of the topics explored regarding ‘good’ fish were: frozen fish, direct marketing and non-fishing impacts. At the ‘clean’ table discussions focused on aquaculture, wild seafood and fish from freshwater and rivers. The issue of ‘fair’ was broached by reflecting on the role of women in fisheries, access, and the difficulties that young fish harvesters might face on their way to becoming professionals of the sea.

As night fell, the discussions came to a close, and happy hour took over, led by the Fishwives Sea Shanty Trio. Accordion, strings, and a strong voice were the perfect ingredients for songs about the seas, fish and fisherfolk!

Monday morning, and the week begins with stories about that most beloved of fish, the salmon. Talks concentrated on the work that communities are doing to protect the salmon’s fragile habitat, waterways connecting land and sea, that are vulnerable to pollution. Melanie Brown described the case of a major mining project that is being considered, which would threaten the wild salmon in Alaska’s Bristol Bay, the world’s largest wild salmon run, a unique place where five different species of this fish coexist.

“How do you save what you love?” asked Mark Titus, a filmmaker who presented his film “The Wild”, in which he reflects upon the cultural relevance of wild salmon. “If we want to keep wild salmon, we need to eat them. Only by demanding wild salmon on our plates, will we keep the habitats in good condition, and keep the ecosystems clean.” Again, we consumers have the power to make an impact! Kirk Hardcastle, our loyal MC, took us on a journey back through time, back to when redwoods from Alaskan forests first became attractive as timber. “Back in those days, conservation was not a common thought. They didn’t know about the consequences that rivers would face because of forest clearing. But nowadays, we know that the timber industry is compromising a more vulnerable resource, salmon, and there are ways to change that.”

The day continues, and discussion turns to the initiatives for transparent, honest, and traceable value chains for seafood, chains that enable consumers to know how, where, and when their fish was caught, and by whom. Stories about the slippery creatures that swim, eat, grow, and live in our waterways follow. From seaweed to invasive species, all of them had their moment of glory at Slow Fish 2018!

For the final session of talks, the light was turned to shine on the policies that affect our community-based fisheries, our oceans, and our food. Slow Fish is a world of relationships, and this is demonstrated by our sister networks who are connecting, aligning, and taking action around the globe: NAMA, Slow Fish Canada, EcoTrust&Local Catch, Slow Money, BC Young Fishermen’s Network, Alaska Marine Conservation Council, Golden State Salmon Association, Local Ocean, Marine Fish Conservation Network…

With the screening of the film “Of the Sea” and the trailer launch for “The Wild” at the AirBnB headquarters, the curtain came down on Slow Fish 2018. Three days of intensive, constructive and fruitful discussions produced several commitments and strengthened connections among seafood lovers willing to change the way that we consume fish, and willing to protect our coastal culture and fishing people. Know your fish! Know your fishing community! 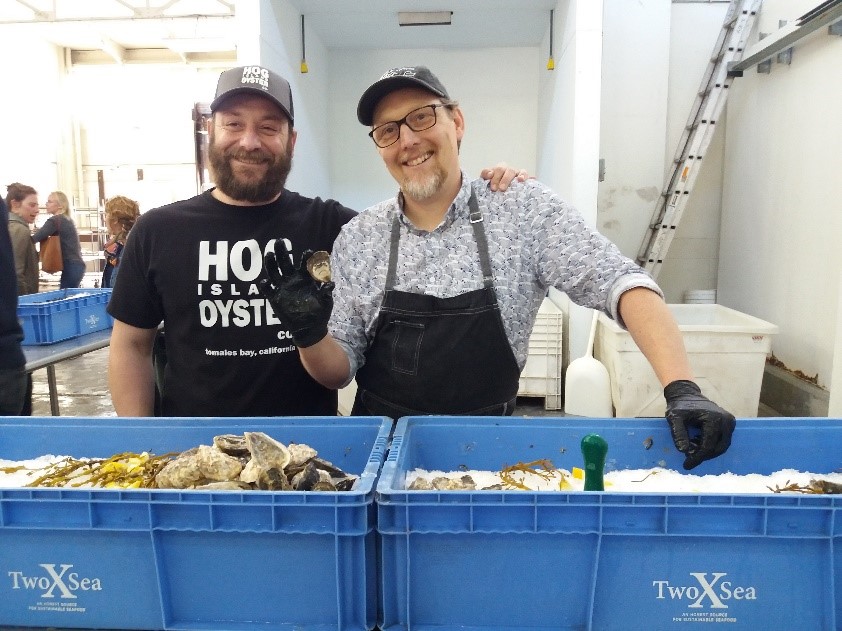