Archive » The Situation is Critical: Reflections on the Agrifood Atlas

Today, the agrifood system lies in the hand of few gigantic corporations. Multinational firms have established themselves along the length food chain, controlling huge market share across every segment, from seeds, chemical inputs, animal and crop genetics to manufacture, distribution and retail. They face very few obstacles in their quest to dominate the market.

In most people’s imagination, these big companies provide economic growth, development and employment. What’s more, they promote themselves as the only solution able to feed the 10 billion people the Earth is expected to host by 2050.1 So why should society resist them?

The new Agrifood Atlas published by Friends of the Earth Europe, the Henrich Böll Foundation and the Rosa Luxemburg Foundation is an attempt to clarify the all-but-transparent position of multinational companies within the agrifood system. The study aims to stimulate debate on a topic that is all too often misunderstood or disregarded.

The so-called “corporate way” cannot and will not save our future food production, of course. The strategy of increased productivity (based purely on quantity, at the cost of quality) is not the answer, as “for every increase in productivity achieved on this basis, there is a price to be paid sooner or later”2, be it socially or environmentally. Even now, we already produce enough food to feed 10 billion people. So why do 815 million people still go to sleep hungry?3 It’s not a matter of production, but of access. Food is unequally distributed, resulting in poverty, social exclusion and a continued rise in inequality. That’s before we consider the embarrassing levels of waste of food at each step of the chain: through harvesting, spoilage during transport or storage, in stores and in households.

We could soon see near-monopolistic levels of market control as a series of mergers between the biggest players take place behind closed doors. The five biggest ever mergers in the agrifood sector occurred between 2015 and 2016, with a total economic value of nearly half a trillion dollars. The further concentration of power in the industry is pushed for and guided by investments group like the American-Brazilian 3G Capital, a firm founded in 2004 which has almost no public presence, but which has led the mergers between AB-InBev (the world’s largest beer company) and Kraft-Heinz (the world’s fifth-largest food procesor) and bought Burger King, the world’s third-largest fast food operator.

The biggest merger of all is that proposed between Monsanto & Bayer, which is currently being examined by the European Commission, and would, if approved, create the largest producer of agrochemicals, seeds and pharmaceuticals in the world. Its largest rivals have already merged (DuPont and Dow, Syngenta and ChemChina), and Monsanto has already eaten up a lot of its competitors over the years, leading to this current oligopoly. Though the company is notorious for its marketing of glyphosate4, and its public image has been damaged, sales and revenue remain healthy. Monsanto’s logo does not often appear on its products, a strategy used by several corporations which have received bad press. 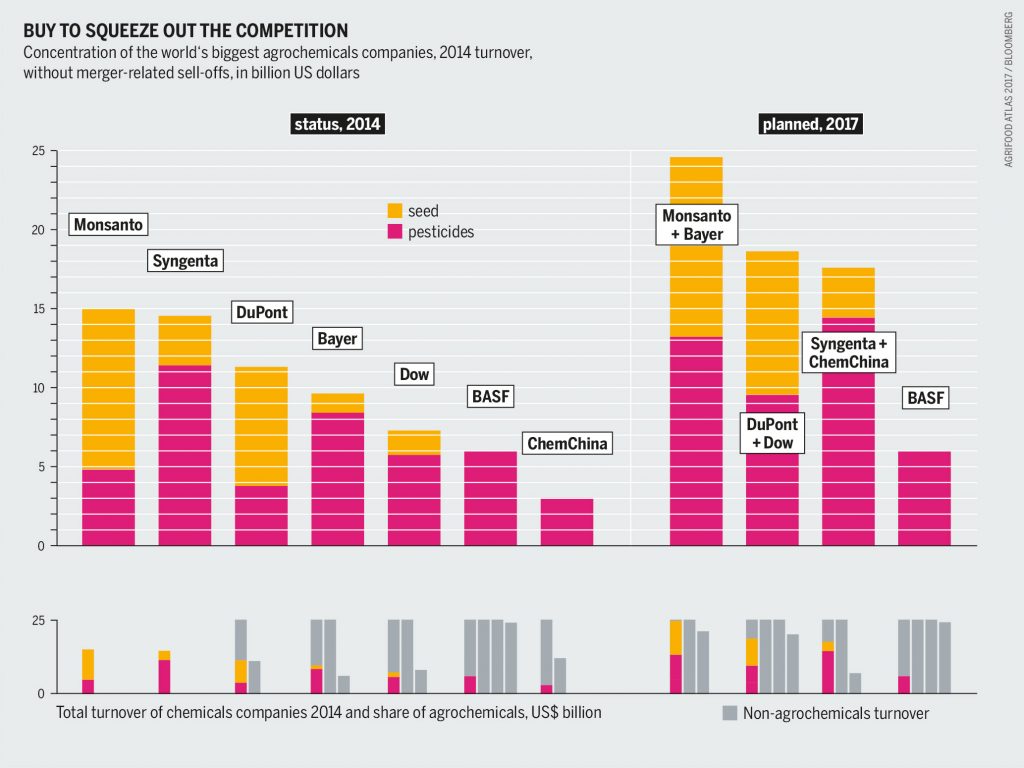 These three mega-corporations, Monsanto-Bayer, DuPont-Dow, Syngenta-ChemChina) will be able to control the genetic material in our food through patents, influencing the entire food system and making famers evermore dependent on their decisions.

Another inevitable and desired outcome of these mergers, for the mega-corporations, is the confluence and synergy of logistical and administrative structures, with the consequent loss of thousands of jobs, as happened in the Heinz-Kraft merger, when 5.000 positions were cut and a fifth of their processing plants closed down. So much for job creation.

Oligopoly structures also lead to a buyers’ cartel, wherein food retailers and processors are able to make their power and presence felt along the entire food chain, putting pressure on suppliers who then impose lower prices on producers.

Retail consortiums are also becoming larger over time. In Europe, the Schwarz Group, which owns Lidl and Kaufland, jumped from the 8th position to become the largest in Europe, surpassing Carrefour. This is despite a decrease in the number of store locations, as total square footage continues to grow, and supermarkets seek to provide every possible item, benefitting from enormous economies of scale and minimizing costs.

What makes these discount supermarkets so irresistible to consumers? The clue is in the name, and the attraction of below-cost offers shows that sadly, consumers disregard the fact that what is sold to them cheaply at the retail level is only cheap because every previous step in the chain has been cheap for the seller, too: often low-quality raw materials are gathered, processed and distributed by workers whose salaries and conditions take the hit. Yet the average consumer, bombarded by aggressive advertising, is encouraged to focus solely on “value for money” in quantitative terms, and not the political, social, economic and environmental dynamics behind a $3 chicken. Consumers alone cannot change the entire system, though decisive stances taken collectively can lead to winning some battles, if not the war.5

National and supranational institutions must immunize themselves against multinational lobbying strategies and intervene to regulate competition in the market. We cannot afford for so much power to rest in so few hands. Antitrust authorities revising big mergers are not doing enough, nor can they: new laws are needed to protect farmers’ and workers’ rights, to provide consumers with the tools to make more conscious choices, to protect natural resources and the common good. On the other hand, we, as citizens rather than consumers, must claim our our right to good, clean and fair food.

Slow Food is going in this direction: through our campaigns and events we’re spreading the word that another world is possible, and it starts with supporting virtuous producers. We are working together with other civil society organizations and the wider food movement to bring about the end of this greedy, inhumane and ecologically indefensible food system.

4 Glyphosate is the main element in the herbicide RoundUp, which is classified is possibly carcinogenic by the WHO.

5 For example, Nestlè boycotts between 1977 and 1984 led the firm to stop its aggressive baby milk advertising.