Archive » If you do only one thing today – do this

and join the thousands of people who attended the Slow Food Climate Action Conference in saying that we need a world which is Good, Clean and Fair to tackle climate change.

In particular, we want food and agriculture to be given due consideration and the place they deserve at the COP26 tables. 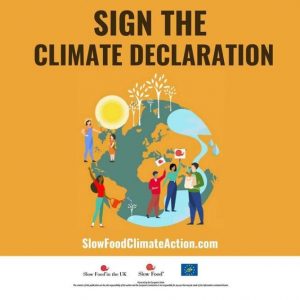 Your signature will be delivered together with all the signatures we manage to collect to the COP26 Presidency in Glasgow next November.

Just a few days ago, the Arctic has experienced temperatures of more than 30C, the far reaches of Canada more than 40C, and the hottest temperature ever recorded came in the same month. Germany has been hit by a violent weather event that caused severe and devastating flooding. Of course, climate change isn’t just about extraordinary events, but they act as harbingers of what is to come.

Climate change disproportionately affects countries in the global South, those who live in poverty, women and indigenous people. We heard many of their voices at the Climate Action Conference and we stand with them.

Food and farming is one of the biggest drivers of climate change. Globally, food systems are responsible for 60% of territorial biodiversity loss, around 24% of greenhouse emissions, about a third of degraded soils and full exploitation of at least 90% of commercial fish populations. Researchers predict that even if fossil fuel emissions were halted now, emissions from the world food system would make it impossible to reach current international climate change targets. They say that emissions from food production alone could push world temperatures past 1.5 degrees Celsius by the middle of this century and above 2 degrees Celsius by the end of the century.

It needn’t be, food and farming can be part of the solution rather than being part of the problem. We need a real transition from industrial monoculture and massive animal breeding to sustainable, agroecological farming practices. Habitats must be restored and agricultural areas must become a vector of biodiversity recovery. Farmers must be supported by governments and institutions in this necessary transition away from high pesticides use and towards agroecology, which is based on local biodiversity.

Stand with us, Sign the Slow Food Climate Action Declaration. We want food and agriculture to be explicitly addressed in the final document of the COP26 conference.

Our voices together can not be ignored, please sign it today.

We are hosting a series of 3 trainings from now to the COP26 in Glasglow to dig deeper in the climate change and emergency issue. Please join us on these sessions to learn about possible solutions, actions and contributions that each of us can give. The first training will be held on Zoom on August 23rd at 18:00 CET. The training will be held in English. To join the meeting, click here