The recipe of the Cooks Alliance:

Adele Stiehler-van der Westhuizen is the Managing Director of the Prue Leith Group, where she is in charge of the fine dining restaurant and the professional chef school.

An active Slow Food and Chefs Alliance South Africa member, and making part of other associations, such as Chaines des Rotisseurs e South African Chefs Association,  Adele has always been highly interested in the impact of consumer reviews on the food and wine industry and catering sector development in South Africa. 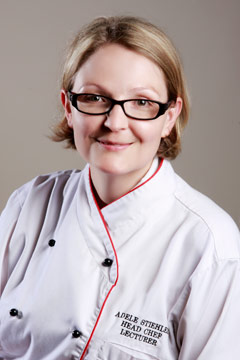 The Chefs Alliance in South Africa was born in 2018 and although it is still fairly young, has its roots in Slow Meat and Soweto Eat Inn events, where the Slow Food network, and chefs in particular, have worked on the question of sustainable meat consumption, food culture in general and local ingredients. These events have not only exposed chefs to indigenous cattle breeds, but also local small farmers and indigenous communities and endangered products that were later included in the Ark of Taste. One of the most renowned Alliance member is surely Kobus van der Merwe, who won the Best Restaurant in the World award at the inaugural World Restaurant Awards in Paris in 2019. His cuisine is a highly regional cuisine of the Strandveld, and is perhaps one of the best examples of Slow Food-type of restaurants.

South Africa can boast a great biodiversity. A mix of several indigenous and migrant cultures, especially from the Netherlands, but Asian countries are present too, that results in a diversity of food items and a wide range of unique local recipes. Meat plays a lead role in the South African cuisine with a per capita consumption that is one of the highest in Africa.  Chef Adele suggests a traditional national recipe, the shredded beef shin. A recipe that should be prepared exclusively once a week and not on Mondays!

This dish is made with the meat produced from the Afrikaner cattle breed, that is very different looking to European breeds and it is one of the three cattle breeds that are indicated in the Ark of Taste.

The breed has creamy white horns, long legs, muscular thighs, rump, back and loins as well as a hump that sits behind the neck. Coat color varies from a light tan to a deep, dark cherry red. The Afrikaner is a low maintenance breed that is heat tolerant and very adept at withstanding harsh conditions which can be found in large areas of the northern parts of South Africa. They have a good temperament, are intelligent and therefore are easy to farm with. The most important aspect of this breed is the high quality meat they produce, which has won acclaim in taste tests and been documented by scientific research. There has been a decrease in the husbandry of this breed in the last fifty years. In 1964 there were 759 registered farmers of Afrikaner cattle in the country. Today these cattle are reared by a few farmers thinly spread over South Africa. Seeing as industrialized farming has taken hold of the commercial farming system of cattle in South Africa, the Afrikaner has become highly discriminated against. Farmers of Afrikaner cattle receive less money per kilogram for their animals, who are slower growing and have a higher percentage of fat, their meat is darker red and fat yellower than industry “standard” beef. The result is that there are significantly fewer farmers engaged in exclusive single breed farming of Afrikaner cattle.