Last Saturday the Slow Food Youth Network (SFYN) Netherlands proclaimed National Potato Mountain Day. At no less than 11 locations throughout the Netherlands, consumers could buy potatoes for a small fee, which would otherwise be used for a much lower value as animal feed or biogas. What a shame!

With dozens of SFYN’ers, enthusiastic volunteers and thousands of consumers, we were able to save more than 110.000 kg of potatoes from waste. How did we get here? 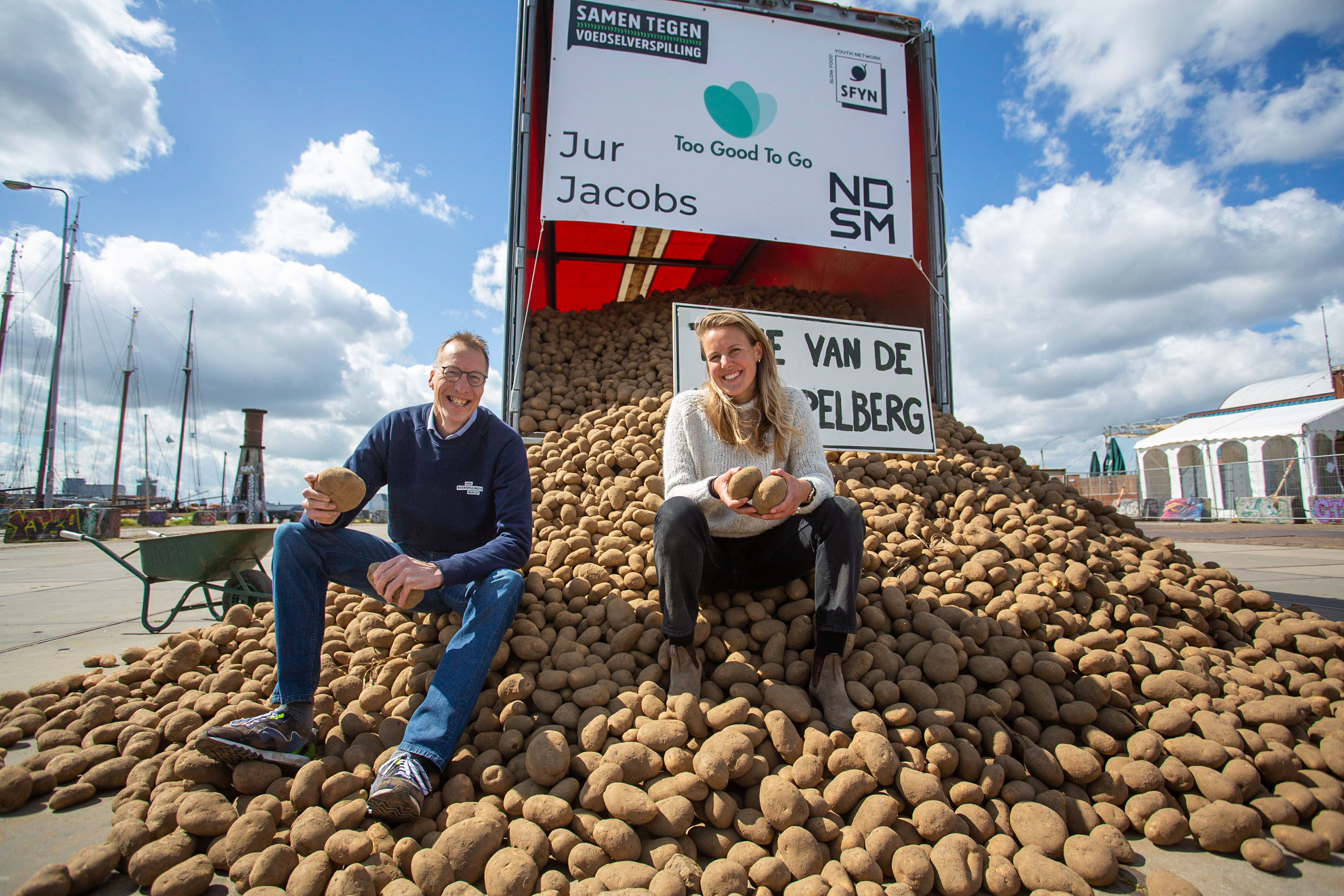 Six weeks ago Jur Jacobs told me: ‘In the Netherlands, there are huge food surpluses and in other parts of the world there are food shortages, we have to do something about this, do you want to participate?’ ‘Yes’, I said, ‘of course I’m participating! Not much later we decided to dump 20,000 kilos of potatoes at the NDSM shipyard in Amsterdam as a symbol of the enormous food surplus in the Netherlands. In 6 hours all potatoes were sold out. The demand for even more potato mountains was great, and so was the enthusiasm among SFYN’ers all over the Netherlands. Again?’ asked Jur. ‘Again!’ I said.

The lost demand for fries from the catering industry, festivals, and export is a major concern for many farmers. Potatoes remain lying around and are used with a much lower value for, for example, biogas or cattle feed. The amount the farmer gets for this is sometimes lower than the cost price. This not only disadvantages the farmer but also leads to hundreds of thousands of kilos of food being wasted.

Potato mountains throughout the Netherlands

After the success in Amsterdam, young people, with dozens of local partners, volunteered to create a potato mountain in their hometown. Without large budgets, but with MEGA a lot of enthusiasm and ambition. Saturday, June 27 was proclaimed National Potato Mountain Day. With no fewer than 11 potato mountains throughout the Netherlands, 110,000 kg of potatoes were saved from waste in a single day, and the farmer received a fair price for his potatoes. 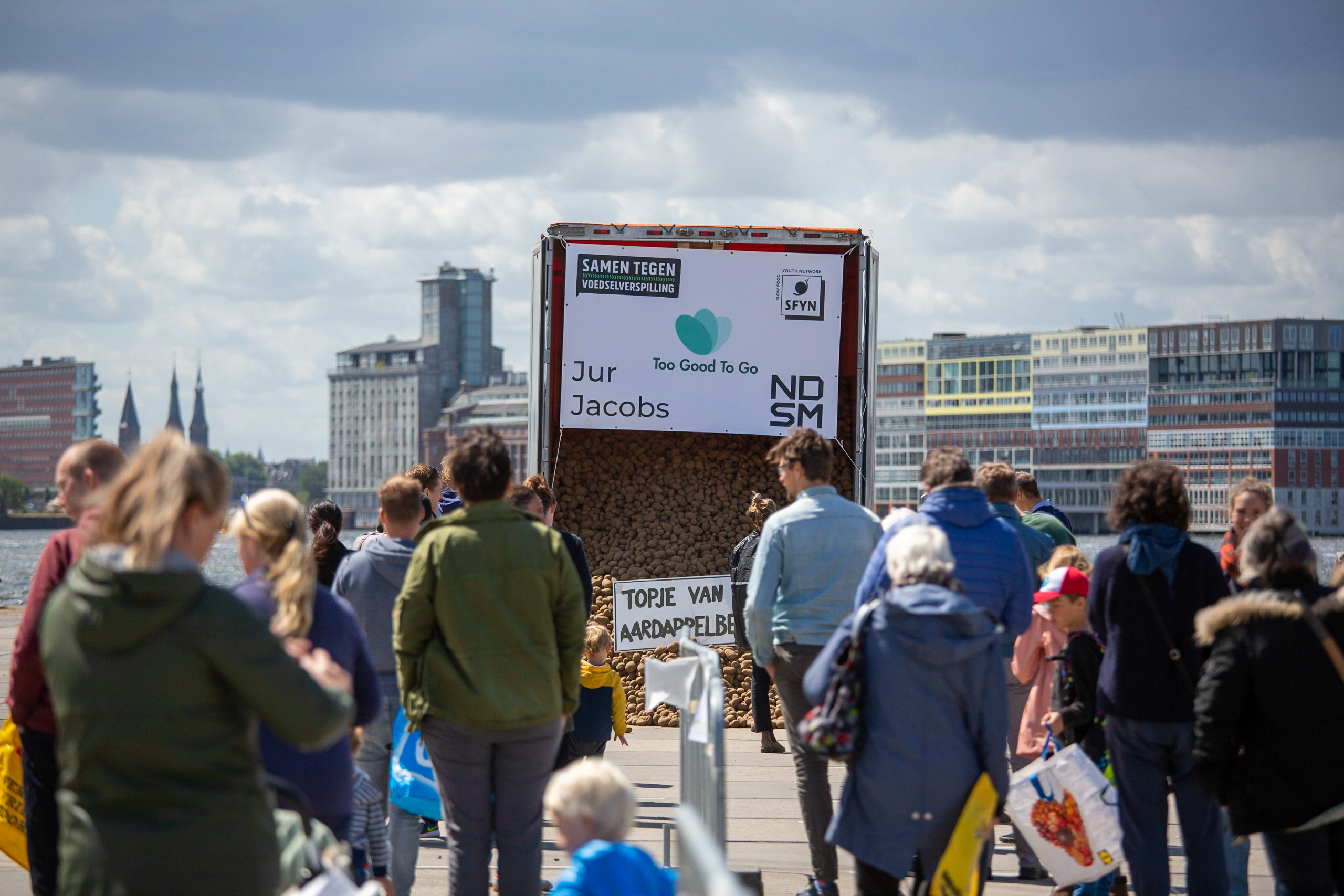 Working together for a fairer food system

And it didn’t stop there. Through regional media (including AD, Parool, Leeuwarder Courant, Eindhovens Dagblad, Noord-Hollands Nieuws, DUIC, RTV Rijnmond and more) we reached hundreds of thousands of people. Of course, this 110 tons is only the tip of the potato mountain and there are still hundreds of thousands of kilos of potatoes (and other overproduced food) in the barns of producers. Yet this potato mountain symbolizes the food surplus on the one hand and the enormous food shortage on the other. For example, 800 million people go to bed hungry every day while we in the Netherlands waste 2 million kilos of food every year. The COVID-19 crisis not only makes this unfair distribution painfully visible, it also makes the proportions even worse than before: larger surpluses versus larger food shortages. That’s not okay.

At the Slow Food Youth Network, we believe that everyone is entitled to good food. With this action, we call on everyone to work together towards a fairer and more resilient food system.

– The National Potato Mountain Day is an initiative of Slow Food Youth Network Netherlands (SFYN Netherlands) and creative entrepreneur Jur Jacobs. The action is organized in cooperation with Foundation Together Against Food Waste, Too Good To Go and many local partners. For more information, please visit www.aardappelberg.nl.

– TIP! Are you curious which dishes you can make with potatoes? Take a look at www.aardappels.nl. Enjoy your meal!